Raising the Ship: CMU Robotics Team Gunning for the Moon 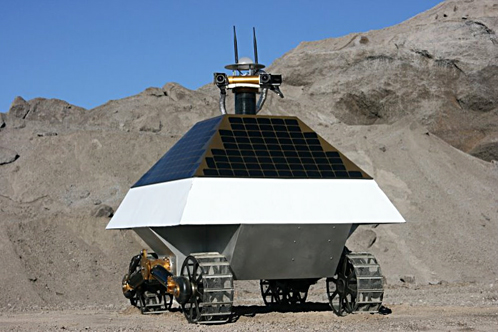 Strictly speaking, Red Rover 3 isn’t much to look at. Modeled of Foamcore, hunkered on the basement floor of Carnegie Mellon’s Newell-Simon Hall, it’s being poked and prodded by a pair of young scientists trying to figure how this third iteration of their proposed lunar robot will land in the Sea of Tranquility, conquer the blistering heat from a 24-hour sun, survive frigid shadows, and shake off the murderous moon dust that swirls above the arid surface–dust so abrasive it grinds like shredded glass.

That’s after the little fellow, about a yard high, has been blasted off the Earth’s surface, landing on the moon in one piece, then rolling some 500 meters–all while transmitting high-definition video.

It’s all in the service of the Google Lunar X PRIZE, a $30 million international competition for the first privately funded team to send a robot to the moon. With a registration deadline of December 31, 2010, the prize stands until December 31, 2012. 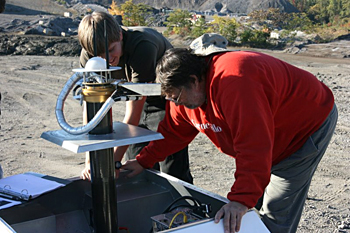 “My team,” says Dr. William Whittaker–everyone calls him Red–“is burning night and day on it. Because the Lunar X Prize is one of the great ones, the largest technology prize of all time.”

The burners, some 50 Carnegie Mellon hotshots, are going full tilt. “You never accomplish something like this with Ph.D.s,” Whittaker shakes his head. “I wouldn’t trade 10 rookies for a veteran. It’s the vitality and commitment of youth that makes this succeed. Doing it is not an old man’s game.”

Pretty big challenge, but if anybody’s up to it, it’s Red Whittaker. CMU’s Professor of Robotics and Director of the Field Robotics Center, the tall, soft-spoken, self-effacing man cut his teeth taking robots where humans feared to tred. An international star since sending robots into the damaged Three Mile Island nuclear reactor in ’83, his RedZone Robotics develops robots for hazard duty. Searching for fallen meteorites in Antarctica, testing active volcanoes in Alaska, even rolling across Mars, Whittaker’s creations revel in dangerous places.

Now he wants the moon. “These prize challenges are merely catalysts,” Whittaker says. “When you win, of course you cash the check. But it’s never about the money. It’s about a bigger game. Recent robot challenges have attracted tremendous corporate relationships, product initiatives, great agendas. Here, we have the opportunity to build a community and an industry. This kind of challenge creates a leap of technology, transforms belief, raises all ships.” 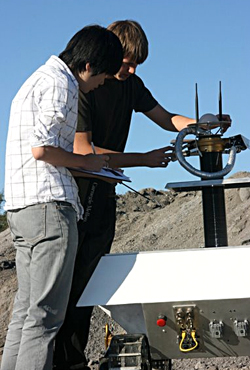 And the ship, it seems, has needed raising. Twenty-five years ago, when Whittaker sent his robot into deadly Three Mile Island, there weren’t commercial robots. “They were things of science fiction or Hollywood,” he shrugs, “but by and large not a part of real world. It was a matter of dreaming up what robots might do.”

Given Pennsylvania’s vested interest in both agriculture and mining, robots were a natural–performing arduous tasks and traveling into dangerous places to map old, abandoned mines. “Everything humans have or eat comes from mining or farming,” Whittaker points out. “Robots have found roles in those industries. Plus security and exploration. Their impact is ever-expanding.

“For example,” he adds, “exploration is alive and well on this world. Robots are finding new forms of life at the bottom of the ocean–from tube worms to fish that never see the light of day. So while exploration was once the purview of people, things have changed so much that what we know of the surface of Mars has been brought to us by machines.”

So why stop now? “In the beginning,” Whittaker says, “all you have is a story. Then you build a team. Then technology artifacts. Investment. Sponsorships. The world aligns for the success of the venture.”

Like Red Rover 3, which is soon to be cast in lightweight alloys, fitted with motors and batteries and wheels. “Something like this takes a great deal of doing,” he says. “But all these challenges begin with the same discount that its beyond reach, it won’t happen in our time, it’s technologically unachievable, it’s too expensive. While each of those perspectives is valid,” Whittaker admits, “they don’t stop the show. They don’t thwart intention or commitment.” 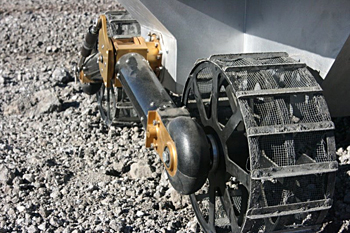 “This one fits like a suit of clothes,” he says, smiling. “I’ve been interested in the moon and lunar robots for a good while. I’ve believed in the future of it. It’s an authentic pursuit.”

As are robots. “That is the destiny,” Whittaker says, “and it’s already underway. While robotics does not yet have its Henry Ford or Bill Gates, the future is in very good hands. We will change the world by actualizing robots at work. There will be a fundamental shift in the way we build, secure, sustain, power and feed the world. The robots we create, and the leaders we develop, will expand the bounds of human experience.”

The moon is only the first step.

Up close with the Lunar Rover’s wheels and suspension

All Photos Courtesy of Michele Gittleman