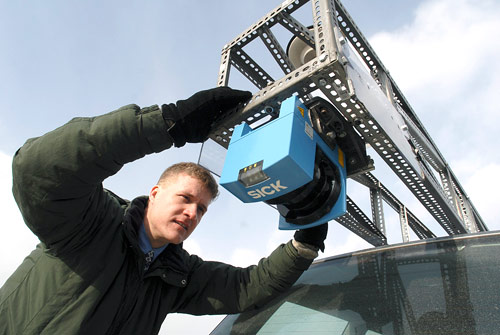 To most people, a road is just a road; a bridge is just a bridge. But picture this: you’re driving down I-95 at 80 mph, your front wheel skids and your car goes out of control into the median, grinding to a halt just shy of oncoming traffic. Phew.

But do you think it was all just dumb luck?

It’s easy to take engineering and infrastructure for granted–until there’s a massive car accident or bridge collapse. That’s why Penn State’s Larson Transportation Institute has had eyes on Pennsylvania infrastructure research since 1968. The institute began with a landmark partnership between Tom Larson, a civil engineer; Wolfgang Meyer, a mechanical engineer; and Bob Pashek, a professor of business, and has always celebrated the interdisciplinary nature of infrastructure.

When last year the world learned that Pennsylvania is home to more structurally deficient bridges than any other state, it served as a grim prophecy, announcing that inaction is not only dangerous but also expensive. PBS’s Blueprint America, a documentary focusing on Pennsylvania’s failing bridges, has the total repair bill around $14 billion. Now entering its 41st year, LTI is hard at work training a bright young crop of students that hope to turn the tide on Pennsylvania’s most dubious distinction–its bridges–while continuing research into new safety technologies. 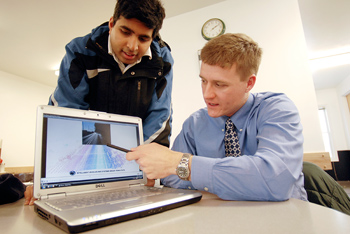 And for a specialty that is often taken for granted, LTI’s researchers and infrastructure eggheads have never been in higher demand. When President-elect Barack Obama announced plans to pump billions of dollars into America’s failing infrastructure, our governor was listening. In mid-November, Ed Rendell met with the Obama transition team to talk infrastructure, later announcing his elation over the president-elect’s devotion to infrastructure investment.

Long story short, LTI is about to blow up. Researchers are scrambling to snatch up increasingly available research grants and exploring projects you’ll likely be hearing more about in the very near future.

“Let’s just say we are very optimistic,” says LTI spokesperson Michael Casper. “The infrastructure needs of our state and our nation will need to be addressed in the very near future. We are gearing up for that shift and making sure we are ready for it.”

Toward a more perfect median

Sean Brennan caused over 20,000 car accidents last year. And he did it without so much as a license suspension or speeding ticket. Is he a lucky bastard or a menace to society?

Neither. Brennan is an assistant professor of mechanical engineering at Penn State, and for the past year he’s been working on a project sponsored by the National Cooperative Highway Research Program to prevent head-on collisions on rural divided highways. 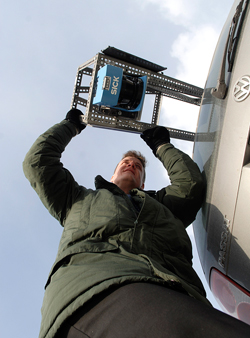 Using a virtual median design, Brennan and his team can digitally replicate every type of accident likely to occur. They can even figure out how to prevent them.

“We have seen every vehicle type and speed,” Brennan says, “but in all our simulations, you see three basic driver types.”

Some drivers will calmly steer toward the center of a median, or do nothing, as in the case of drunk or sleeping drivers. But most of the time, Brennan says, a driver will jerk the wheel immediately back toward the travel lane. This is often an unsafe maneuver, especially in high-set SUV’s that may hit a median trench and roll over into oncoming traffic. This maneuver is so unsafe that according to Brennan’s research, the drunk or sleeping driver who drives headlong into traffic has a better chance of survival.

To counteract this, Brennan has been researching on-board vehicle safety features that would make your car more aware of the world around it. Or, as he calls it, “Google Maps on steroids.”

“I am researching a system where not only is the roadway known to the vehicle but all of the obstacles and all the dangerous cliffs or dangerous bridge pillars are accounted for around the roadway,” Brennan says. “And the vehicle can prevent you from overreacting, enacting the brakes on one side for example and locking the wheel into what we call skid steering.”

But that, Brennan says, is a long way off. Right now the team is more concerned with creating a more perfect median. Using a laser mapping system, they have driven a vehicle over 6,000 miles creating digital images of median profiles to get a sense of all the barriers drivers are up against. Trees can cause nasty head-on crashes; cables can cause decapitation in smaller vehicles and rollover in larger ones; shallower trench medians may do nothing to stop the out of control or sleeping driver. Brennan says they will simply keep experimenting until the right idea comes along. 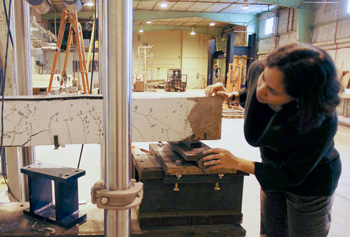 “Maybe we develop a roadway where all the medians are filled with Styrofoam pellets and as you go off the roadway, they would simply envelop the vehicle in a big snuggle of softness,” Brennan says. “People have looked at radical designs but the challenge is always expense. It has only been in the last few decades that people have realized that roadside design plays a role in overall safety.”

Keeping a robot’s eye on bridges

To determine what new materials will hold up the best, Lopez puts each sample through a series of tests designed to simulate normal wear and tear over the long term–adverse weather conditions, varying weight distribution and structural soundness.

“There is no material that lasts forever so a lot of attention must be paid to maintenance,” Lopez says. “Because once a bridge gets to a certain point, it is cheaper to close the bridge down and start over.” 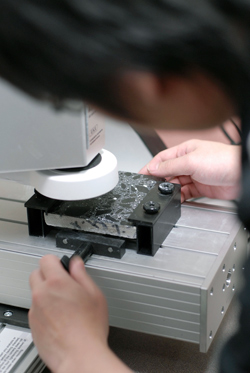 That’s why–beyond the material testing–Linzell and Lopez are working to design systems that monitor structural health of new and existing bridges in real time.

This form of real-time information sharing has application beyond saving bridges. As new funding for infrastructure becomes available, it becomes more and more important to have a monitoring system in place that will check all bridge and road projects in the state against one another to prioritize funding.

“More advanced computer bridge analysis, design and management tools will see increased utilization as the capacity and service life of existing structures is evaluated and as those structures are either replaced or repaired,” Linzell says. “The capabilities and  advancing at an astounding rate and as bridge engineers and owners become more comfortable with those tools you will see more structures being analyzed and designed using sophisticated 2D and 3D computer models.”