Four generations of Buttons have kept the Button Oil Company afloat for seven decades in Northeast Pennsylvania. But even with the family business playing such a central role in their history, the Buttons are relieved, with the most recent generation, to shed at least one family tradition.

The business and family were built on a cycle of success and devastation that began in the 1930s. Edward S. Button founded the company in 1933, trucking fuel and heating oil around to customers in Kingston, a borough just across the Susquehanna River from Wilkes-Barre.

In 1943, the company crossed the river and moved to its current location in Mountain Top, overlooking the city. But before his sons, Robert and Charles, had finished high school, Button died in a fiery truck crash, leaving the fate of the business and the family in the hands of two teenagers.

The boys persevered, eventually expanding the company’s reach in Northeastern Pennsylvania and its offerings to include service and maintenance. Running much of the operation out of the family’s house, the kitchen table would serve as a desk during the day and be cleared for dinner in the evenings. 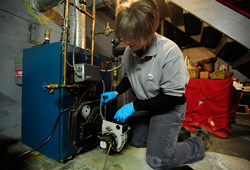 Robert married and had two sons, Ed and Robert. For a time, things went well, but history was doomed to repeat itself.

Charles retired, and, in 1977, Robert died, again leaving the success of the family and company in the hands of two teenage brothers. The experience was “pretty freaky,” said Ed, who at the time was an 18-year-old senior in high school headed to college on a football scholarship.

Instead, he passed up the scholarship to help his brother keep the business afloat–but this time there was help. Kathleen, the boys’ mother, picked up right where her husband had left off, running the office while the boys ran the trucks.

The transition from helping out with the business to leading it was difficult, she said, but “it was all we knew, all I knew… When I lost my husband, if I didn’t have these boys, I don’t know.”

And that’s where the family’s pattern of leaving the business to teenage brothers ended. Ed and Robert again expanded the company, adding five more trucks to the two-truck fleet, taking over the service business Charles had spun off, buying more service vans and becoming distributors of energy-efficient products, such as insulated building forms and high-tech oil burners. 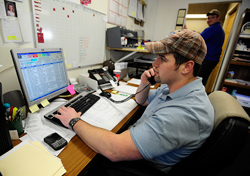 Underground storage tanks were installed so company truckers wouldn’t have to travel down the mountain on the sometimes-treacherous state Route 309 to fill up. In 1984, the company headquarters moved out of the family home to a one-story office next door.

Button Oil Company now has about 3,000 customers and employs 14 people, including Ed’s son, Ed R., and daughter, Amanda, and Robert’s son, Robert III, all of whom are in their 20s. The brothers’ aunt, Nancy, serves on the company’s board. While some of the employees aren’t actually family members, the number is shrinking–Amanda is engaged to one of the drivers.

At 74, Kathleen remains heavily involved in the business. She’s often the company’s face at social and volunteer events. “Everybody knows my grandmother,” Ed R. says.

Of particular significance is a camp for asthmatics the company supports at the local Camp Kresge. The family also helped build the Max & Lorraine Health Lodge at the camp, in memory of Kathleen’s daughter, Lorraine Tracy, who at 40 died of complications from an asthma attack in 1992, and Lorraine’s 10-year-old son, Max Tracy, who died months after her from similar complications.

“You have to keep busy,” Kathleen says. 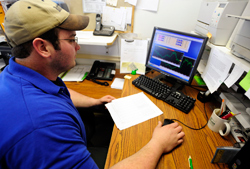 In the current recession economy, Button Oil is gaining customers by accepting federal and state Low Income Home Energy Assistance Program applicants. The program requires the company to be more lenient with its billing, but Ed wishes more people would consider it. “A lot of elderly people are too proud,” he said. “They say it’s welfare. It’s not.”

The company’s and family’s current leadership, brothers Robert and Ed, “can’t wait” to hand over the reins, Ed said.

And the younger generation is excited to take control–again. This time around, the heirs appear to be more prepared for the task. Amanda, who went to college to learn about oil furnaces, is a service mechanic, while Bobby and Eddie, as they’re known, are dabbling in futures trading and are looking to expand their energy-efficient product offerings.

“It was just a way to diversify… to keep everyone employed over the summer,” Ed said. “Most oil companies lay people off.”

But that doesn’t mean the family business will stray far from what it knows best. Hydrogen or fuel cells or whatever the next generation of energy will come around, Ed says, but “not any time soon.”

According to Robert, “there’s always going to be older houses burning oil.”

Bob Button III works at his computer in the families Mountain Top business.

Eddie Button checks on prices at his desk

All Photographs by Aimee Dilger