Joe Van Belleghem had a message for the 300 green building advocates gathered in Pittsburgh on March 31: “We have an obligation as developers to share innovations,” he told the city’s Green$ense conference. “We don’t have time not to share.”

Van Belleghem is a founder of the Canadian Green Building Council and a partner in Windmill West, which is developing Dockside Green on the harborfront in its home city of Victoria, British Columbia. Although Green$ense was designed to showcase the economic opportunities of sustainable developments in Western Pennsylvania, so far this Canadian project is showing up everyone in North America, setting a world record as the top LEED-rated development.

Dockside Green’s LEED (Leadership in Energy and Environmental Design) Platinum certification, offered by the U.S. Green Building Council, marks the community as a one-of-a-kind development for its water and energy efficiency, attention to indoor air quality and use of environmental building and landscaping materials. Currently under construction, the 1.3 million-square-foot, 15-acre site is a new mixed-use neighborhood on a former brownfield with residences, retail shops, office space and light industry. The 26 buildings, eventually housing 2,500 people, will be New Urbanism come to life. 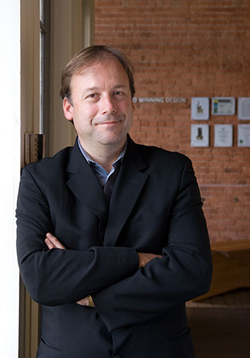 Van Belleghem wagered a $1 million penalty, payable to the City of Victoria, had Dockside Green not become the first community to earn the LEED distinction.

“I can’t tell you how many people told me I was nuts” before the development was underway, he told the crowd. “We expect by the end of the year we’ll have four of the top world records” for LEED ratings for individual buildings.

From the beginning, he says, he intended to do things differently. He asked the development’s marketers whether the new condos needed air-conditioning to sell.

“Absolutely,” he was told. Instead, he installed awnings that deploy and retract depending on sun and wind conditions, allowing the buildings to use 100 percent fresh air through central or unit-specific ventilators. That’s not only eco-friendly, it saved everyone money and made the air healthier, especially for those who suffer from asthma or other respiratory ailments. Eighty-five percent of the condos were sold in their first three hours on the market.

The office buildings also use a passive ventilation strategy. And each residence has utility meters viewable–and governable–via the Internet. Van Belleghem’s aim was to make everyone at Dockside Green ultra-conscious of their impact on the planet. Now, he says, “You can be anywhere in the world and, if you have an Internet connection, adjust your heat” to avoid waste.

Healthy air is also created because the site avoids adhesives, sealants and paints containing volatile organic compounds, as well as wood products with urea-formaldehyde–going so far as to employ a specialty logging firm that harvests trees flooded by reservoirs at hydroelectric projects all over the world. 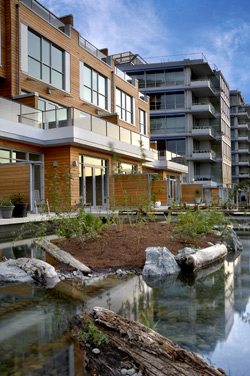 The site has its own wastewater reuse plant–one of a slew of demonstration renewable-energy strategies there, including everything from supporting local businesses to using fly ash in the development’s concrete, making it the first greenhouse-gas positive
neighborhood on the continent.

Its innovative strategies also include staying off the municipal storm-water drainage system. To help, the site employs a self-sustaining constructed creek. The system wasn’t perfect at first, developing algae. But, Van Belleghem says, his company “put the right kinds of plants in that would eat the algae,” along with waterlife such as crayfish. As it turns out, “There’s a need for crayfish in local restaurants, so they’re going to be harvesting,” he says. Residents have since spotted otters, ducks, “and a deer. We have no idea where he came from.”

In all, 280 million liters of water will be saved at the site each year. “We have another million-dollar advantage over other developers.”

There’s not a blade of turf grass on the entire site either, although it contains everything from a park to planted walls, roof vegetable gardens and bike trails.

Dockside Green ameliorates the effect of transportation–particularly cars–by offering residents a discount if they don’t keep a car on site. Each building also has its own car-share program, alongside the site’s shuttles and harbor ferry (for travel to town).

Van Belleghem, now 22 years a designer, wasn’t always this eco-conscious. In college, learning his trade, “We never talked about the environment” except as a means “to avoid prosecution” for failing to comply with the law, he says. 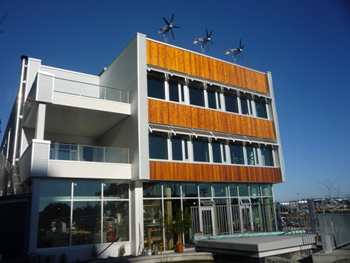 Then, a decade ago, he woke up and realized his projects weren’t adding as much value to his community as they ought to be doing. Now he looks toward the “triple bottom line,” he says, of economics, ecology and social equity. That includes the idea of “no brand-name retail–we favored community-based retail,” he says. And the affordable housing element has allowed the site to attract a diversity of incomes, ages and cultures so far. Local First Nations native peoples were also invited to honor local history through public art on the site. An employment and training program for First Nations construction workers has also been created.

Dockside Green as a whole, Van Belleghem concludes, has had a “catalytic effect on change” among other developers locally. And the Canadian government is “seeing what we’re doing is working, so they’re starting to embrace it,” easing rules so that other developers can emulate Dockside Green.

And the effort has changed him too.

“I’ve been in this business a long time,” he says. “I was self-absorbed with work. As a result of this movement, it has really connected me with my core values.” When he talks to contractors now, he adds, “we talk about values. It’s the reason we’re successful. I can hardly wait to go to work in the morning.

“I really think this economic collapse is an opportunity for all of us,” Van Belleghem adds. “It’s a chance for us to reconnect to our basic core values.” As he emphasized to the Western Pennsylvania gathering, “If you do that, you’re going to lead the world in climate change.”

Details from future and completed projects

All photographs courtesy of the developer