Stimulus Breakdown: Where the Money’s Going

The American Recovery and Reinvestment Act, commonly known as the Obama stimulus, has begun sending funds to America’s most troubled cities. Interest in how tax dollars are being spent is high, so we thought we should let you know where Pennsylvania’s sizable piece of the fundingpie is going to end up. Here’s a look at three large funding recipients–and what they plan to do with your money.

Pennsylvania health centers are scheduled to receive $9.5 million in stimulus funding through 36 government grants. The funds are designed to contend with predicted rises in uninsured patients. According to the Department of Health and Human Services, Pennsylvania hospitals and clinics are expected to see 19,653 uninsured patients this year, adding to a total of 59,603 new patients overall. This estimate may be too conservative, especially if the economic crisis continues.

“More Americans are losing their health insurance and turning to health centers for care,” Health Resources and Services Administrator Mary Wakefield said in a statement released in late March. “These grants will aid centers in their efforts to provide care to an increasing number of patients during the economic downturn.”

Pennsylvania is one of the largest recipients of this type of funding in the nation. So far, only six states have received more, including New York, California and Obama’s home state of Illinois. Initially, funds will be going toward saving 180 health center jobs.

While health insurance has become a major stumbling block for many Pennsylvania families, the health service job sector has remained strong through the economic crisis’ Pennsylvania’s education and health services sector gained 1,500 jobs in the month of December. But despite these numbers, Governor Ed Rendell called for a statewide focus of assistance monies on the health services and education sectors when he laid out his stimulus allocation plan in early March.

The stimulus money ensures nearly 20,000 uninsured patients the health care they need and at least 180 health care workers the jobs they have earned.

As a life-long resident of Pittsburgh, Allegheny County Executive Dan Onorato understands the legacy of industry and manufacturing in the region. So when the new stimulus bill announced over $360 million available for local governments to modernize city centers, Onorato and Mayor Luke Ravenstahl knew where it should go.

That’s why, with the $8.1 million his county is about to receive in stimulus dollars, Onorato and his cohorts are aiming to turn Pittsburgh’s blue-collar past into a green-collar future. In a press ev 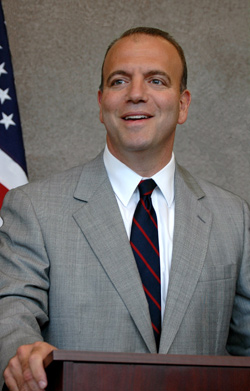 Allegheny County was already on the right track before Chu and Solis arrived. Last year, Onorato put Pittsburghers to work replacing all prison lighting with LED lighting, which saves the county $178,000 per year and lowers energy usage. Now, a German company, FLABEG, has announced the construction of a $30-million manufacturing plant designed to produce parabolic mirrors for the solar energy industry. This plant is expected to create over 200 manufacturing jobs, or, as Onorato calls them, steelworker jobs.

This mentality of building industry from past legacies also touches Pittsburgh’s reputation as a nationwide leader in green building. With stimulus funding coming in, Pittsburgh will put its citizens to work revitalizing historic and run-down buildings with green roofs, solar energy arrays, and weatherized doors and windows.

“Above all, they want to see people working,” Onorato said of the Federal Government’s stimulus oversight. “So we want to work with our already-existent industries quickly to put people to work on these green projects.”

When the Philadelphia Phillies became World Series Champions in 2008, the national attention shown brightly on many of the city’s finer institutions. But an unforeseen consequence of the massive waves of Phillies fans overtaking the city were the failures on the part of our transit operations. SEPTA’s subway system shut down service during some big games as well as the victory parade. And our airport, often voted one of the worst in the country, was seen in all its glory by national and international journalists.

In stark contrast to the renovated Market Street line, with its sleek stations and clean, refurbished cars, the Broad Street line has looked like the subway time forgot as stations along the route have slipped further and further into disrepair. Especially those stations north of Center City, where Phillies faithful don’t necessarily tread. 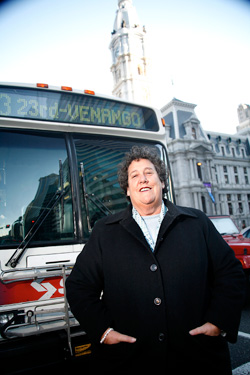 But with SEPTA receiving over $190 million for regional repairs, the massive transit authority has allocated $90 million for the city of Philadelphia. That money will go in part to full rehabilitation of the Spring Garden Street and Girard Avenue subway stations.

“The airport is really an economic engine for the entire region,” Director of Strategic Operations Andrew Stober said on Wednesday. “There are more than 30,000 jobs, it is the 10th busiest airport in the world with over 30 million travelers go through it every year. These are construction jobs, truck drivers, engineers, and project managers all working to fix this runway.”

Overseeing the disbursment of stimulus funding has been the Office of Transportation, an office once dead but revived by the Nutter Administration. After his election, Mayor Nutter created the Deputy Mayor of Transportation position to restore the city’s fractured relationship with SEPTA and improve a mismanaged transit system. Deputy Mayor Rina Cutler and her staff, which includes Stober, have been working to make sure transportation remains priority number one in a city desperately trying to improve tourism and travel.

For more information on where your stimulus dollars are going, check out Recovery.gov, the Federal website dedicated to stimulus oversight. Along with graphs, daily news updates and charting of federal projects, there are strict time frames and reporting mechanisms in place to determine funds are going where they are supposed to. For projects by state, further oversight and news on fund releases, visit stimuluswatch.org.