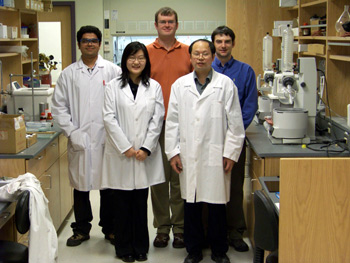 Treventis Corporation, an early stage life sciences company focused on treating Alzheimer’s disease, has taken a new approach to a problem that impacts more than 25 million people and their caregivers worldwide. Recent funding has validated their approach, which is as simple as looking at more than one root cause.

In a lab in Nova Scotia, the Bryn Mawr-based company is examining multiple proteins that could go awry and begin its assault on brain tissue. Under the leadership of chief scientific officer William Wong, Treventis has also developed a proprietary, computer-based 3D discovery platform that enables the pursuit of multiple lead compounds.

“I think the neurology community is beginning to realize Alzheimer’s is a multi-factorial disease,” says CEO Bill McIntosh. “The proteins in a normal state are fine, but what happens is they tend to aggregate, so you’ll have one individual piece that gloms onto a second one, and a third and a fourth and you end up with plaques called Lowey bodies.

“It’s like a lock and key. We’ve put these compounds into the lock and see if it opens. If it does, we know the compound will stop the aggregation.”

Working out of Wong’s finished basement for now, McIntosh says the company, which has assembled an impressive team and maintains its full lab set-up in Canada, is about 18 months away from significant expansion. That did not stop BioAdvance, the Biotechnology Greenhouse of Southeastern PA, from making a $550,000 seed-stage investment in Treventis this summer.

“It’s a huge step for us, really a major milestone,” says McIntosh. “Here’s an organization that has sort of taken us through the ringer in terms of due diligence and at the end of the day they were sold on our science and management. It offers great validation.”

The funds should push the company through proof of efficacy in an animal model of Alzheimer’s, the next key milestone. That would allow Treventis to pursue a significant round of venture financing, considering big pharma’s interest in Alzheimer’s and the painful physical and emotional toll it takes on patients and their families.