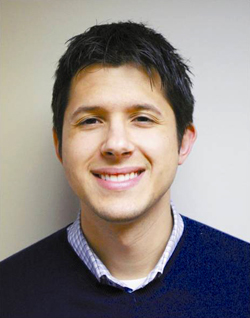 The tagline at Originate Ventures, a venture capital investment firm in Bethlehem focused on early stage product and services companies in PA and the surrounding region, is “Entrepreneurs helping entrepreneurs.”

The folksy feel–complete with a logo that features a light bulb with streaks of green–isn’t just crafty branding. It’s epitomized in 25 year-old Matt Bieber, a lifelong Lehigh Valley resident who started his own business when he was 16 and was promoted earlier this month to principal after less than three years at Originate.

While studying at Lehigh University, Bieber founded an online entertainment company focused on massive online role-playing games and rolled it into IGE.com, which now operates the world’s largest secure network of buying and selling sites for virtual currency and assets on the internet. Bieber also has worked in Bear Stearns’ financial analytics and structured transactions group and has also worked for Barclays Capital and Deloitte and Touche (in Prague) after internships with Senators Arlen Specter and Rick Santorum.

Bieber, who is usually the first set of eyes on any submitted business plans at Originate and has also managed the company’s successful internship program, talked with Keystone Edge about his fast rise, what he’s learned about making a business work and what his firm, which makes investments between $1-4 million, is looking for.

Keystone Edge: How did you get started as an entrepreneur?
Matt Bieber: I got the bug really early on. I remember as far back as 12 years old, going to baseball card shows and buying and selling sports memorabilia and collectible cards. I then got into online gaming and by age 16, I was monopolizing the computer in my house and my parents said it’s about time to get a job, basically taking the computer away. I started brainstorming with a buddy in his basement who had been doing stuff on eBay, and I thought I could probably make a market in online video games, so I started in secondary markets selling my time and training people how to play the games, but realized that couldn’t scale so I started to buy and sell account items and currency. Before you know it I purchased my own computer and was working out of my bedroom full-time. I never had to go out and find that real job.

KE: What did you learn from that experience that you use when evaluating young entrepreneurs today?
MB: It really comes down to two things. First, you have to be catchy in a big way. I was part of the whole “gaming going online wave.” A lot of people failed as well that tried to get into that market. I think I put my head down, took the ups and downs in stride and kept working through it. The second thing is tenacity and passion for what you’re doing. If you’re passionate, you’ll stick with it no matter what. I really look at the market, the overall opportunity and why now or the future is a good time, and then dig into the person and the team and the levels of passion and make sure they’re willing to do everything necessary to make it happen.

KE: What do you think you bring to the table for Originate?
MB: I think it’s too early to tell, but I’ve got some good indicators I’ve been adding value, but it’s a long-term game, so I try to keep doing what I’m doing. I do think I’ve cultivated a good network of people outside of Originate to bounce things off of to help me. You’ve got to know what you don’t know. I’m never afraid to ask. I try to fail fast and move quick. You have to go out there and mix it up with all different types of people from different walks of life. Treating everyone with respect and cultivating a great network of mentors, I think are very important.

KE: What do you make of the opportunities for those seeking venture capital in PA?
MB: I think it’s been a tough asset class as a whole nationally and internationally. There’s an excess amount of capital, and people will stay that number needed to come back down. In PA, I think there’s some great programs going on, in particular some of (Pennsylvania deputy secretary for technology investment for the Department of Community and Economic Development) John Sider’s programs in clean tech are spurring growth in the region to give dollars to leverage. I think there’s some interesting opportunities around that. Fundamentally, the markets are tough right now. Where the dollars are going to come from at the early stage level in the future is definitely a questions yet to be answered. The asset class is in need of innovation and changing. I’m confident it will rebound. Where are the opportunities?

Clean tech is definitely a sector where there seems to be dollars, as is healthcare, to an extent.  I think PA is excellent in early stage incubators. Ben Franklin Technology Partners is a terrific program that other states are trying to replicate. (Originate managing partner Mike Gausling) is a Ben Franklin grad, going from zero to $100 million in sales (with his company OraSure Technologies in Bethlehem).

KE: How has Originate been innovative in recent months?
MB: I think one of the big things we did, when this whole economic crisis started in October, 2008, we really stepped up and started investing. We made a nice move in taking of advantage of what were attractive times, we thought. Timing was everything and we made five primary investments in 2009 when a lot of people weren’t looking at relatively small funds. In addition, we like to say we bring financial acumen and governance of the traditional venture capitalist, but also try to drive value and manage growth through a structured strategy process our team put together.  I think we bring a broad set of skills to the table, really rolling up our sleeves and acting as resources to those teams in which we invest. Two of our partners built and sold companies and one of our partners has been through investments in 100 companies. That’s a lot of interesting experience for guys who understand markets and how to move through them.