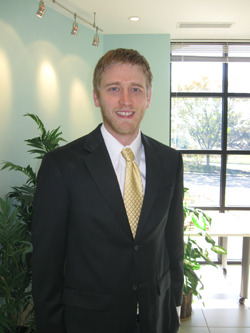 Dustin Eplee has been tinkering and thinking big since he was a boy. The Montgomery County native built a small hot-air balloon that “actually worked” for a puppet show at the vacation bible school he worked at growing up, and for a middle school eco-fair, the project he built was too big to get through the school’s doors.

“They changed the rules and implemented a weight limit after I presented my project,” says Eplee, who went on to graduate from Penn State University with a degree in architectural engineering.

Now, it’s Eplee who’s changing the rules. For one, at 29 years old, he’s already CEO of his second company while he works practically full-time for State College’s premiere architectural engineering firm, Burt Hill. Moreover, Eplee’s entrepreneurial spirit and passion for the environment make him one of Pennsylvania’s brightest energy stars. The product he co-invented, the Energy Wall (TM), plans to put fresher, cleaner and less costly air into residential and commercial buildings. Eplee has also motivated (or inspired) friends and family to help him bootstrap his endeavor, a clear signal that Eplee is already a leader in Pennsylvania’s rapidly growing clean energy sector.

STARTING A MOVEMENT
Eplee lived and interned in New York City following his fourth year at Penn State, but had enough of the bright lights and after earning his Masters degree, started working for Burt Hill in 2005. That’s when Eplee hopped on the front wave of green building design. The firm had been known for its solar designs and had done work with the Department of Energy, and recognized something special in Eplee. He was allowed to start an Energy Simulations Group that aimed to influence the very early stage designs of buildings and collect data for follow-up studies. Nowadays, the group spends much of its time filling out LEED paperwork, but Eplee is hopeful the group can still be influential.

“The problem with the LEED documentation is it’s done at the end of a project, and that’s where a client is willing to pay for it,” he says. “I think influencing the early stage design of a building when the owner is sitting down and giving their requirements for the building is important. If you don’t start off on the right design, it becomes next to impossible because of the costs.

“LEED has been good in that it has brought a lot of emphasis on green design but it hasn’t brought, in my opinion, the emphasis to the point where it needs to be. It’s unfortunately still an afterthought.”

A BIG IDEA REFINED
Based on his senior thesis project at Penn State, Eplee used low-grade thermal heat to turn air into water, an amazing breakthrough that was the foundation of his first company, Aeris Technologies in State College. But funding was difficult for a technology that mostly had third-world benefits. Eplee learned his lesson and redirected his efforts to researching materials that were selectively permeable and allowed water vapor to pass through but blocked nitrogen, oxygen, carbon dioxide, and various gaseous pollutants.

The result was a patent for a membrane that’s three times more breathable than Gore-Tex and the basis of Energy Wall, which passed extensive testing in seven residential buildings from Carlisle to North Carolina to Canada. The product achieved up to 90 percent efficiency with no dirt or particulate building through testing funded by the Green Building Alliance in Pittsburgh.

Eplee has spent the last year building automated machinery to mass produce his product in downtown Lancaster, where there’s a “good, skilled labor force” and plenty of family. There are already orders for 112 units, and with an estimated market size for energy recovery ventilators at $384 million, Eplee expects to hire up to 20 people in the next two years.

“Green entrepreneurship is a lot different than starting a software or service-based company because of the manufacturing,” says Eplee. “The foundation of our economy must rely on manufacturing.”

BLUEBERRIES, PRISON & KAYAKS
Eplee grew up in Schwenksville near Graterford Prison on a property that used to be a blueberry farm. He built seven treehouses commissioned by community members from age 7-16 and spent much of his childhood running, mountain biking and exploring in nature, like taking small kayaks through old copper mine shafts.

“When we first moved into our house, we didn’t have electricity or septic,” says Epplee. “I was able to see from age 5 what you need and what you don’t really need in terms of housing.”

Eplee still does a lot of kayaking and canoeing in parts of the state he says many haven’t seen, like tiny streams reachable only by a small kayak. While enjoying the natural beauty of those areas, though, he’s seen some things he’d like to change.

“You learn a lot about a community by the condition of its streams,” he says. “There are tires, acid mine drainage is really sad, but I think it’s more sociological. A lot of communities have fences up and more “no trespassing” signs. The communities that tend to feel their waterways are more public take better care of them than if it were their private land.”

LESSONS FROM DUBAI & INDIA
Working for Burt Hill, Eplee has been able to travel extensively and in Dubai, the bursting housing bubble was “very apparent” to him. It was also striking, he says, how Muslims wanted Western architecture even though it wasn’t conducive to their climate.

In India, Eplee saw more than just poverty. He saw a different way of thinking.

“Green design is a fictitious term,” says Eplee. “India uses a lot less than we do but they have a lower standard of quality of life. For me, that’s the most important thing: How do you bring a higher quality of life while still having a limited environmental impact.

“Most buildings in India aren’t air conditioned or heated. They don’t need heat and can’t afford A.C.
Their electric grids aren’t stable so they don’t rely on electricity very much. The consumption of energy is going to go through the roof in those parts of the world, but they also understand to a much finer degree than Americans the importance of efficiency.”