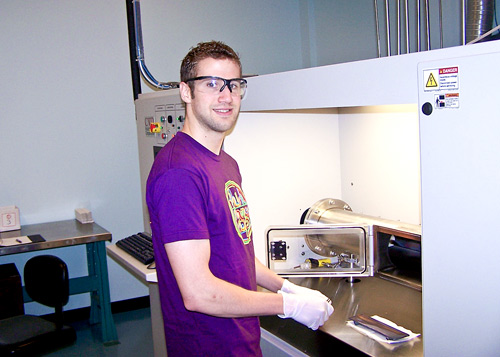 Dave Patton gave up on architecture, but he didn’t give up on building things. He’s just building things you can’t see, unless you happen to have an electron microscope nearby.

Patton graduated from Millersville University this year with a degree in nanofabrication, the process of making devices and tools that are invisible to the naked eye. Today, he works for a startup company in Lancaster called Illuminex that is immersed in the search for a better way to convert sunlight into electricity.

“We’re pushing the boundaries with this,” says Patton, 24, a Mechanicsburg native who now lives in downtown Lancaster. He boasts a family connection to his new workplace. Illuminex is housed in Lancaster’s Burle Business Park, a former RCA factory where one of Patton’s uncles worked for 35 years.

FROM HOUSING BUST TO SOLAR BOOM

Patton wasn’t sure what he would study before he arrived at Millersville. He figured he would do something related to technology. But he also had a background in construction, so architecture became his first choice for a major. He looked forward to designing homes, until turmoil hit the U.S. housing market. So he promptly began looking for something different. 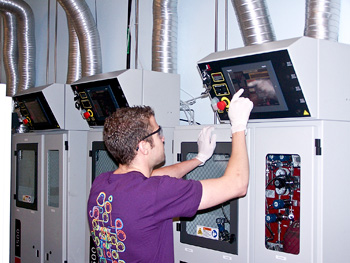 “I liked nanofabrication because it encompassed so much,” says Patton, who took advantage of a special program that Millersville offers in conjunction with Penn State University. The field blends electronics, chemistry, biology and manufacturing, all of which appealed to Patton. “It was something I knew I could excel in,” he adds.

The change in major added an extra year to Patton’s education. But it didn’t dampen his job prospects in an otherwise dismal economy. In January, he landed an internship at Illuminex, one of a handful of companies nationwide experimenting with nanotechnology and solar power. The offer of a full-time job came after graduation in May. He enjoys working for a smaller business, one in which employees have to wear many hats. “It’s the variety of work that keeps it interesting,” he says.

Technically, Patton is a nanofabrication process engineer. He spends his days developing processes to create nanowires that someday will be used in solar cells and batteries. He uses a simpler explanation when describing his job. “I just say I do solar-cell research,” Patton says.

One of Patton’s first tasks involved setting up the room-sized device he uses to grow nanowires. Purchased partly with funds from the state, the device is called a chemical vapor deposition system. At its heart is a football-sized chamber. The chamber creates a vacuum where a mix of gases is introduced and heated to induce the growth of nanowires on materials known as substrates. 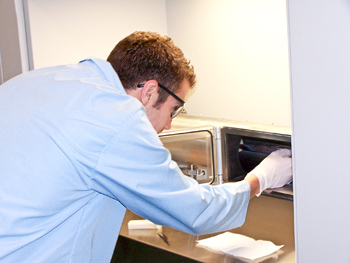 One goal is to figure out which combination of gases and substrate materials leads to the type of nanowires that will do what researchers at Illuminex want them to do. One array of nanowires may help trap sunlight to produce more electricity from a solar cell; another array may store power in a battery. Beyond that, Illuminex is looking for a cost-effective process that can be scaled up for mass production. Nanowires could be used, for example, in solar cells woven into the fabric of tents, awnings or jackets, among other places.

“Solar cells can be incorporated into all kinds of devices,” Patton says.

The work at Illuminex draws on Patton’s formal education, of course. But it also draws on skills he picked up from one of his hobbies, repairing motorcycles. He’s often called on to fix or adjust parts of the chemical vapor deposition system. Just like when he puts an engine back on his Suzuki, he has to tighten everything evenly, and in a certain order, to form a solid seal and avoid cracking anything.

When he’s not steering his bike along the back roads of Lancaster, Patton travels by foot. He enjoys hiking and runs marathons. His best time is just over four hours: Four hours, three minutes and 45 seconds, to be exact. “That’s not something you forget,” he says.

Like a disciplined runner, Patton is focused on the road in front of him rather than the road far ahead. He says it will take at least a couple of years to translate the research Illuminex is doing into actual products. His long-range goals include education at the master’s or doctoral level. And he also has thought about the commercial potential of some of the research he did as an undergraduate. One of his team projects led to a process for creating DNA-sensing microchips that can diagnose diseases.

For now, Patton is content to gain valuable experience at the forefront of solar research. “This is what I wanted to do ever since I got into this field,” he says. He’s also at peace with one of the biggest sacrifices he made after dropping architecture. People driving by a house can easily appreciate the design. But the fine detail that goes into the nanowires of a solar cell? That will most likely escape detection, Patton says. “I appreciate it, and that’s all that really matters.”