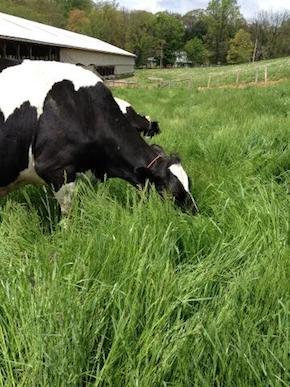 For Sue Miller, making cheese on her family’s Birchrun Hills Farm in Chester County is more than a way to make a living.

“It’s a beautiful process,” she says. “We really have touched everything from the very beginning.”

They breed the calves on the farm, grow the grass their Holsteins (over 80 of them) graze on, and do all of the daily milking. Up until now, they made and aged the cheese at a rented space nearby, before bringing it to market at Philadelphia-area stores and restaurants. Now, thanks to a successful Kickstart campaign — more than fully funded with $33,507 raised as of the drive’s close on December 13 — that is about to change.

After seven of cheesemaking, Birchrun Hills had outgrown that rented space. The funds will allow the Millers (which also includes Sue’s husband Ken and their adult sons Randy, a recent Cornell University graduate, and Jesse, who will receive his degree from Cornell next year) to build their own fully outfitted cheese caves.

Because dairy farming is so capital-intensive and involves many complicated disciplines, from horticulture to nutritional and veterinary science to milk production, “it’s a challenging thing in the dairy industry to be a first generation [farm]…and unusual in cheese-making,” Miller explains. “A lot of people come into cheesemaking after another career.”

“You have to be committed to it not as a career, but as lifestyle,” she adds.

Their first cheese customer, Di Bruno Bros., is a testament to the quality of their handmade raw-milk cheeses. Now, you can buy favorites like Birchrun Blue, Red Cat, Fat Cat and Equinox at venues such as the Fair Food Farmstand and Salumeria in Reading Terminal Market. Local restaurants, including White Dog Café, Fork and Nectar, also serve Birchrun cheeses.

A loan is allowing the family to build the new structure and the crowdfunded cash will go towards equipment, including a curd vat, specialized shelving and a cooling system.

Miller is proud that her two sons have chosen to return to the family business post-college, and she loves the chance to make a living based on the humane and healthy treatment of farm animals.

“I just love everything about [dairy cows],” she enthuses. “Their personalities can really come through…They are calm and lovely and accepting of human beings. It’s nice that they’re kind of unflappable.”

She says the family has been overwhelmed by fans’ support — the crowdfunding campaign easily surpassed its initial $25,000 goal.

“We’re excited that people in our community have so strongly supported this project,” adds Miller. “It’s tremendously humbling.”