The throng in Punxsutawney

*This story originally appeared in January, 2015.

For the uninitiated, Groundhog Day takes place at sunrise on February 2, when rodent oracle Punxsutawney Phil either does or does not see his shadow. If he sees said shadow, there will be six more weeks of winter; if he does not, spring is near! However, for the thousands of people who flock yearly to this small Pennsylvania town two hours northeast of Pittsburgh, Groundhog Day is a weekend-long all-ages party, celebrating all things woodchuck.

“We’re on people’s bucket lists,” insisted Roger Steele, who manned a tourist information booth last year, providing tips to revelers from as far away as Australia.

While the holiday is lighthearted and fun, for residents of the small Pennsylvania borough of Punxsutawney, population 5,904, the economic impact of the town’s cherished rodent is not to be underestimated. On the days surrounding Groundhog Day, every hotel in the town and many in the surrounding area are totally booked.

“The largest crowd we ever had for Groundhog Day was the year after the movie came out,” recalls Michele Neal, executive director of Punxsutawney’s Chamber of Commerce. “It was a weekend and there were just people everywhere.” 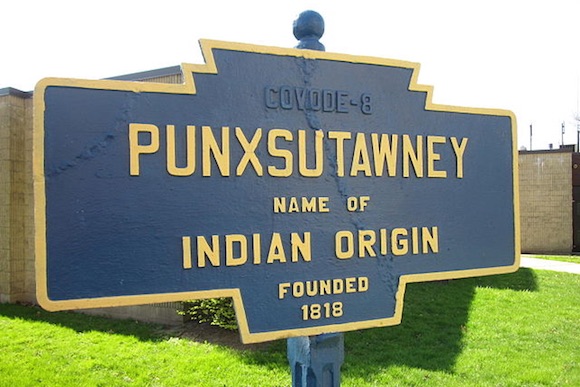 The classic film she is referring to was released in 1993. The existential comedy stars Bill Murray as an arrogant Pittsburgh newscaster who travels to Punxsutawney and is forced to repeat the same day over and over again. It is of course called “Groundhog Day.”

The film is perhaps as surreal as the holiday itself, which has various origin stories and involves many strange local customs, including a group of gentlemen in top hats and long black coats who call themselves “The Inner Circle.” The gentlemen are Phil’s guardians and members of the Punxsutawney Groundhog Club. Phil lives year round in a glass enclosure attached to the town’s library and club members care for him. Since Punxsutawney has the largest Groundhog celebration in the United States, the fated forecast of our country is in Phil’s tiny paws. When winter has been especially bitter, the crowd is known to beg the rodent for relief, carrying signs and shouting pleas.

Now for some fun Groundhog Day-centric facts: The earliest recorded prediction in Punxsy was in 1886. Though the holiday has gone on for many years, there has “allegedly” only been one Phil. Many link the celebration to a German tradition called Candelmas Day and the days of paganism in Europe.

And how exactly does the Inner Circle know if Phil has seen his shadow? He tells them…well not “tells,” but rather “prognosticates,” and they understand thanks to their close relationshop.

“We live here, so we forget how unique this all is,” says Neal of the holiday.

While Groundhog Day is not Christmas or New Years Day and doesn’t allow for time off work, in Punxsutawney one wouldn’t be able to tell. During the holiday, the borough’s population more than doubles. According to Neal, before the movie came out, the town had a mere 1,000 guests for the celebration, but businesses in the entire county now benefit from a large influx, “and when it’s on a weekend, there can even be spillover into Clearfield and Pittsburgh.”

To see Punxsutawney Phil, visitors must ascend Gobbler’s Knob either on foot or by bus, as parking is limited. Armed with groundhog hats and scarves, professional grade walking sticks and camo jackets, the crew seeking to commune with Phil is motley and eager. While the holiday may seem like a celebration for children — with the groundhog as a Santa-esque totemic stand-in — the first shuttle to the all-night party atop the Knob leaves the local Wal-Mart parking lot at 3 a.m., which visitor information providers say is an excellent time to arrive. It’s a witching hour, both too early and too late for anyone but the most hardcore Phil fan or late night reveler.

In some ways, Groundhog Day is like a mini northern Mardi Gras, where beads are replaced with rodent necklaces, and no one gets naked because it’s far too cold. Instead, people layer on hog gear: from slippers to scarves, hats to sweatshirts, everyone is adorned in brown. And if you don’t want to get in costume, there are still carved wooden statues and gigantic sculptures that can be taken home or simply posed in front of.

Yes, it’s true, Punxsutawney is the town a woodchuck built, and it just so happens that once a year, the world shares its fascination.

“It’s just a cool peaceful little town,” muses Rob Burkett, a visitor information provider. “People come from all over the world and they are making their trip to come to Punxsy to see Phil.”

At the Weather Information Center downtown, visitors can pretend to give a newscast, and at the community center, the movie Groundhog Day plays on loop — visitors crash on mats on the floor until it’s time to see Phil emerge.

Down the road from the totally booked Country Villa Motel, Punxsy Phil’s Cakes and Steaks restaurant reached a record number of credit card transactions on February 1, 2014. Exhausted but cheerful waiters and waitresses in the restaurant buzzed about in festive gear. (Punxsutawney seemed to be the one town in America that had forgotten the Super Bowl — Groundhog Day coincided with the game last year.) One waiter’s shirt read: “Keep Calm and Chuck On,” another: “Keep Calm and Don’t See Your Shadow,” and still another featured a groundhog holding a sign proclaiming, “No More Snow.”

However some in Punxsutawney are no longer so impressed by the groundhog’s lovely form. Warming themselves before a fire pit in the town’s park, craftsmen Nate Howard and Damian Skal took a break from carving groundhogs using a chainsaw.

The pair estimated the ratio of groundhog totems to humans to be 20 to one in Punxsutawney.

“But there’s only one special living groundhog and that’s Phil,” insisted Skal affectionately.

On the morning Phil was to emerge in 2014, a crowd estimated at about 25,000 flanked the stage listening to performers sing and joke about the holiday. Despite the drizzle and mud underfoot, everyone was in good spirits.

“If you come to Groundhog Day, you come with a smile already,” said Groundhog Club Vice President Jeff Lundy. “People want to be here. It’s like going to Disneyland and seeing Mickey without having to put up with all the rides.”

A fireworks finale goes off and on-stage performers sing, “What does the hog say?” to the tune of viral hit “What Does the Fox Say?” The crowd cheers as Lundy and his fellow top-hat wearing Inner Circle prepare to escort Phil to his tree-stump burrow on stage. At this point all umbrellas are down, cellphones and cameras are up, and, true to form, the crowd pays no attention to anything but the excitement of the emerging hog.

“Tell us your secrets!” screams an excited fan. This is the 128th trek the Inner Circle has made up to Gobbler’s Knob. Members of the Groundhog Club stand on stage, holding signs reading “Think Spring” and “No More Winter.”

Despite those pleas, at 7:28 a.m. on February 2, 2014, awakened from his slumber, Phil had other thoughts: “A Super Bowl winner I will not predict but my weather forecast you cannot contradict. This is not a football lying beside me, it’s my shadow you see, so six more weeks of winter it shall be,” read Groundhog Club President Bill Deeley to the dejected crowd.

Holly Hampe, a hospital administrator from Sewickley, Penn., took the news in stride. She had a great time seeing Phil on Groundhog Day, but admitted, “It would have been even better if he predicted spring.”

There’s no telling what Phil, “the seer of seers and prognosticator of prognosticators” will see this year, the only thing guaranteed is a big crowd and a great party.