By Alaina Johns on March 5, 2015
Rad Dish comes to Temple 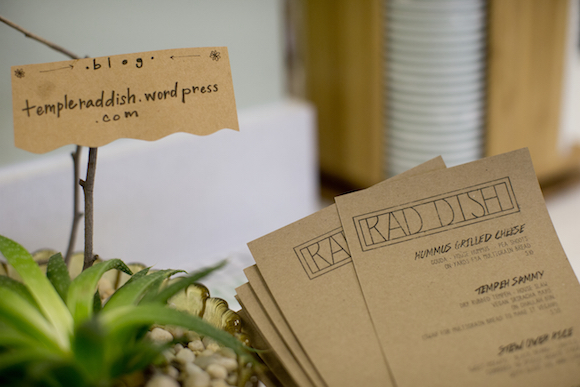 The student founders of Rad Dish 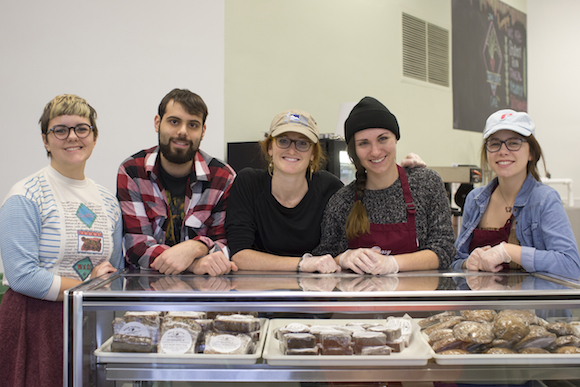 Temple University junior Lauren Troop started out as an environmental studies major, but when she became part of a bold new food co-op business plan with her fellow students, she found the perfect convergence of her interests, and switched to studying entrepreneurship.

The concept for Rad Dish, which opened on February 5 in a former Sodexo café space in Ritter Hall, grew out of a student research project completed a few years ago. The idea failed to move forward once the original thinkers graduated.

But then founding Rad Dish co-op members got hold of the idea, and began working in fall 2013 to make the space a reality. The group met under the auspices and mentorship of Temple’s Office of Sustainability, with participation from campus organizations such as Students for Environmental Action, Temple Community Garden and Net Impact, the university’s sustainable business club.

The team started meeting once a week with help from a three-credit independent study course that allowed them to devote the necessary number of hours to getting the co-op café off the ground. Meetings with West Philly’s Mariposa food co-op, as well as other student groups, including one from the University of Maryland, helped them clarify their vision.

“Our mission was really to provide affordable locally and ethically sourced fresh food to our Temple community,” explains Troop, a Lancaster native. “We do that by sourcing everything within 150 miles.”

Items like tea and coffee and certain spices, which the co-op can’t get locally, are sourced through a major organic and fair-trade supplier.

Rad Dish opened its doors with the help of one year of free rent from Temple and $30,000 in seed money from the Office of Sustainability to help cover the first round of inventory and salaries for workers.

The space is a café now, but Rad Dish organizers hope to expand into more of a grocery model as they gain experience and more local, seasonal produce becomes available. In the meantime, the space already has its own appealing vibe, with floor-to-ceiling windows and art on the walls.

The community has already started to embrace the idea. Someone donated a bike-powered blender, and then a record-payer.

“People have just started to bring in random stuff that made it a unique space to hang out in,” says Troop.

Prospects for the co-op’s future are good, she adds: a large crop of sophomores are just now stepping into leadership roles, replacing graduating founders.

“My favorite part about the project is how we’ve incorporated so many fields of study and so many people with different majors,” insists Troops. “There are people from our business school, arts school, communications, engineering, and people who just love food.”

Rad Dish is now open from 10 a.m. – 3:30 p.m. Monday through Friday in Ritter Hall, on the corner of Montgomery Avenue and 13th Street.