By Samantha Wittchen on March 12, 2015
A sample bike share station 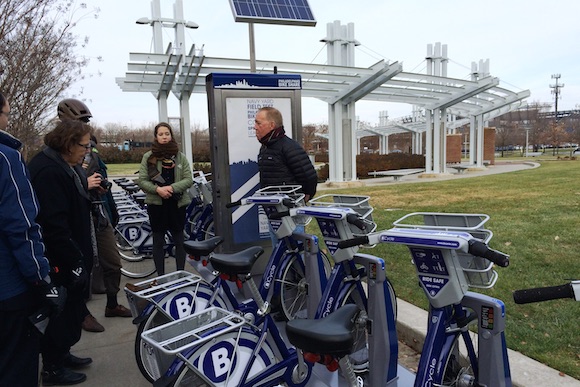 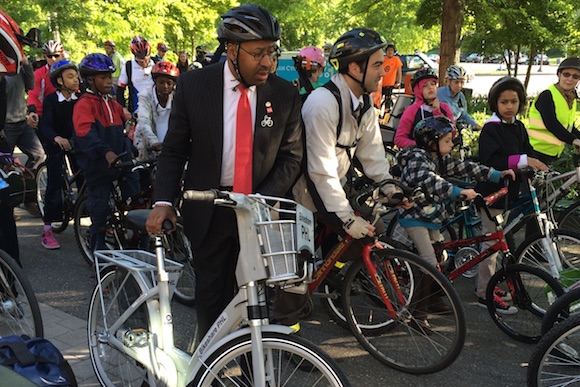 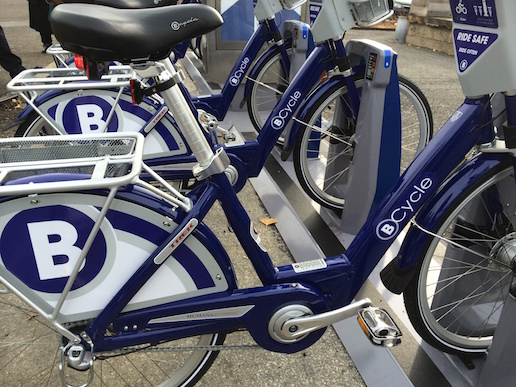 Connecting with the community at Lancaster Jazz 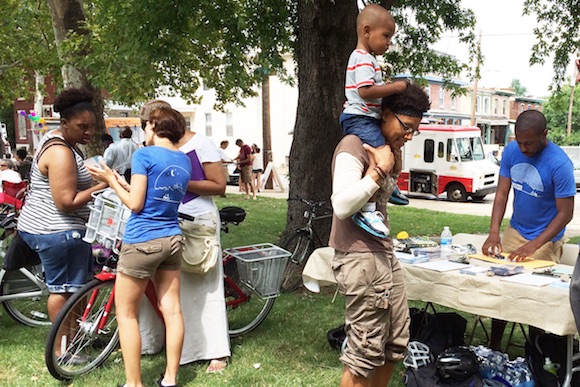 Spreading the word at the Lancaster Avenue Night Market 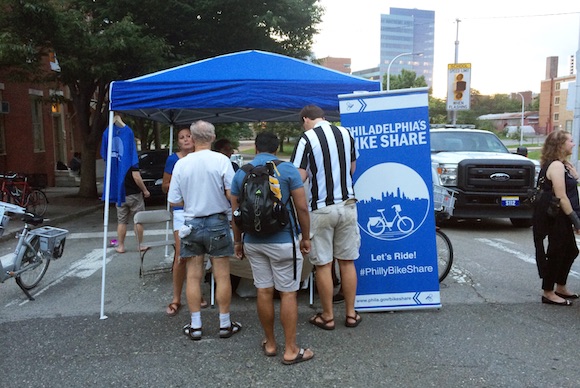 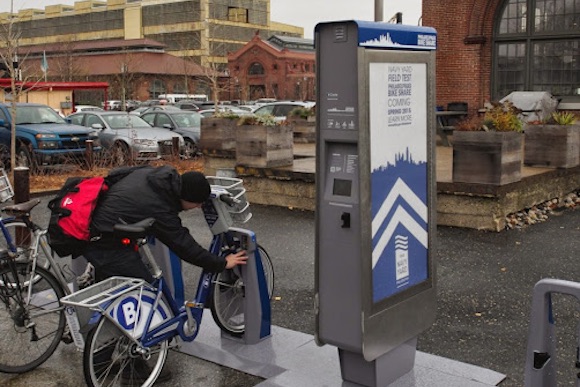 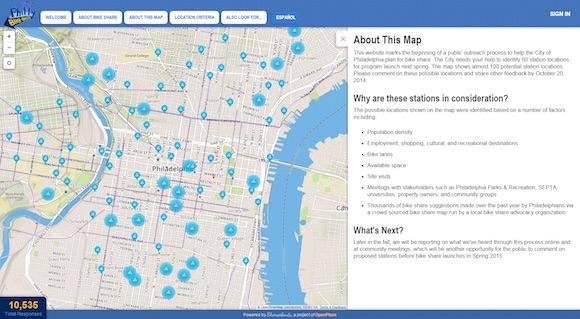 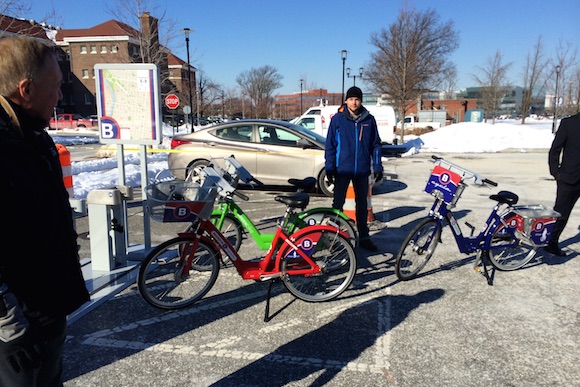 As Philadelphia begins to thaw out from an epic winter, bike lanes throughout the city are again bustling with activity. And with a bike share program on target to launch this spring, riders may soon find those lanes busier than ever. But the question is, who will be riding? And can Philly's take on this growing transit trend be the most inclusive in the nation?

For ardent bike share supporters, the launch is an occasion they've anticipated for over five years, when the Mayor's Office of Transportation and Utilities (MOTU) first commissioned a feasibility study and concluded that a bike share held tremendous promise for Philadelphia.

Now it's almost here: The sponsor has been named, the bikes are on their way, and the station locations are being finalized. With the launch, Philadelphia will join the growing list of world-class cities offering this sustainable public transit option to residents and visitors.

Even better, the system will operate independent of tax dollars. Indego, as the bike share system has been dubbed, will be sponsored by Independence Blue Cross to the tune of $8.5 million over the next five years. Meanwhile, the City has made a $3 million capital investment to purchase bikes and station equipment; the rest of the program costs are covered by a mix of city, state and local money, in addition to private grants.

According to Brodie Hylton, vice president of business development at Bicycle Transit Systems and marketing manager for Indego, a big part of their efforts involves marketing — signing up members and letting Philadelphians know that bike share is another option in the public transit landscape.

As part of that mission, they want to make sure that ridership is as diverse as Philly's population.

Enter the Better Bike Share Partnership, a collaborative effort among MOTU, Bicycle Transit Systems, the Bicycle Coalition of Greater Philadelphia, the National Association of City Transit Officials (NACTO), and PeopleForBikes. It's a three-year initiative funded by a grant from a New York family foundation to make Indego the most socially equitable bike share in the country and help it serve as a model for other cities.

The Bicycle Coalition has already started working with existing community organizations to spread the word, and throughout the fall, they teamed up with MOTU to convene a series of focus groups, hosted by Temple University's Institute for Survey Research, comprised of low-income Philadelphians between the ages of 18 and 45 living or working in zip codes where the system will be launched.

The focus groups revealed concerns about the program, including theft, personal safety while riding, cost and payment options.

To address the later, program officials have committed to keeping the price affordable — no more than $20 for a monthly membership that allows members to use the bike for up to an hour with no additional fees. Paying by cash will be an option for those without access to a credit or debit card.

“The goal is to enroll 500 cash members by the end of the first year,” says Aaron Ritz, bicycle programs manager for MOTU.

To help alleviate safety concerns, there will be group rides and safety education classes to help new riders become comfortable on two wheels. According to Katie Monroe, bike share outreach manager for the Bicycle Coalition, they're also partnering with Neighborhood Bike Works to encourage families to ride together.

“I've been involved with bicycle education and engagement for a long time, but people aren't going to come to these events if they don't have a bike,” explains Monroe. “What's really exciting is that this lowers the barrier to entry to trying to ride a bike in the city.”

To determine station placement, MOTU conducted an extensive survey in fall 2014. They released ninety-five potential locations on phillybikeshare.com (now rideindego.com) and asked for input from the public.

The organization also placed artwork on sidewalks at potential station locations, inviting passers-by to text their thoughts on each site via Textizen, a local tech startup's web platform. To capture feedback from less technologically-inclined Philadelphians, MOTU dispatched members of the outreach team to ask individuals what they thought of the sites.

The survey attracted 5,824 participants. According to Ritz, the response was very positive — “Almost alarmingly so,” he jokes, acknowledging that Philadelphians are often skeptical of new city initiatives.

He adds that determining station locations has been a relatively smooth process. Ritz estimates that 10 percent of the sites are finalized, with a majority of them hosted by the Department of Parks and Recreation, while only another 10 percent are still in major flux. A final station map will be available when the program launches.

The bikes themselves will be sturdy three-speed, step-through rigs featuring adjustable seats, front and rear lights, and a basket. MOTU hopes to hold a preview event prior to launch where attendees can check out the new rigs.

The bike share team hopes all their planning and outreach efforts will make a difference. Hylton believes it will.

“The city gave themselves enough time here to really do the rollout right,” he insists. “The outreach that they've done has been as thorough, if not more, than any city we've launched in.”

Analyzing what other cities have done right and wrong in implementing bike share will prove useful as well.

“We have the opportunity to do a really great job because we have the benefit of having learned from other cities,” adds Monroe.

And launching in the spring, when the weather is improving and people are clamoring to get outside, can't hurt.

But program partners hope that visitors and residents alike will view the bikes not just as recreational vehicles, but as a daily transit option. Hylton describes it as “public transit on your schedule.” Taking two wheels could even decrease commute times, especially for Philadelphians who get to work via a combination of bus and train routes.

“It's been awesome to see people look at the map of potential stations,” says Cara Ferrentino, manager of strategic initiatives at MOTU. “[They] have that moment where they say, 'Oh, I go from here to here on a regular basis, and I could use bike share to do that now.'”

While Indego will launch with locations in central parts of North, South and West Philly, the City expects to add many more locations, expanding the reach further into neighborhoods by spring 2016. As the system grows, Hylton believes it will have a multiplicative effect on ridership.

Hylton also believes growth in bike share ridership will improve cycling conditions for everyone in the saddle.

“By putting more cyclists on the road, you are creating demand for better cycling infrastructure,” he argues. “And that makes things better for all cyclists.”

Besides the health advantages of getting more people on bikes, the program could also provide economic benefits to the region.

In preparation for the launch, the Bicycle Coalition has already started scaling up their operations and is now recruiting paid bike ambassadors. Bicycle Transit Systems is moving into a new space and setting up a call center to respond to operational issues. They expect to add twenty to thirty new employees — jobs that will pay a living wage and come with benefits.

Ultimately, Ritz thinks that bike share will become a staple of transit in Philadelphia. Ferrentino agrees.

“We have the long-term in mind.” she says. “It will only become more useful as time goes on.”