It’s just after noon, in the midst of the hustle and bustle of the Elizabethtown College cafeteria, where nearly all 2,000 undergrads are scarfing down their lunches in a hurried attempt to make their 12:30 p.m. classes, and a young man stands smiling while talking to a group of four females. He is laughing and appears very comfortable, leaning against the coffee machine and dressed in dark jeans, white Nikes, Phillies baseball hat and a graphic T-shirt that says, “Believe the Hype.” He checks the time on his iPhone and hugs each of the ladies goodbye before he jets out of the cafeteria, to run down the steps on his way to his class.

As he steps outside into the sunlight he puts on his Ray-Ban Wayfarers, slings his NorthFace backpack over his shoulder, and says “Hey!” to about seven people before sauntering into the business building at 12:29. From this scene one thing is clear: this young man has confidence.

And confidence is exactly what A.J. Discianni, owner/founder of Believe the Hype (BTH) apparel, wants to sell to students and people all over the world.  Discianni, a 20-year-old student at Elizabethtown College, is creating a company that is more than just a brand, but a mindset.

Discianni says that the idea to create an apparel brand that inspires others to believe in themselves came to him in late 2010 after working with another apparel company and realizing his natural ability for selling shirts.  He proved successful at persuading others to buy them and wanted to make his own — something positive and motivational — and Believe the Hype apparel was born.

With help from his freshman year roommate, Ryan Follweiler and best friend, Andy DeLenamy, they designed their first shirt and sold it to local hip-hop artists.  Since then the brand has created more than 17 shirt designs and sold BTH in over 40 states and four countries.  In less than a year, BTH apparel has inspired others to believe in themselves while continuing to motivate owner, Discianni to operate a successful business while maintaining a Public Relations degree.

Keystone Edge (KE): What is your passion behind Believe the Hype?
A.J. Discianni (AD):When you wear Believe the Hype apparel it’s a sign to the world that you are not afraid to be who you are.  You are not afraid to stand out from the crowd, and you are aiming for the top. That feeling of confidence in yourself is what Believe The Hype is all about. I personally live by Believe the Hype and I wake up every day wanting to give off the utmost confidence in my abilities, whether it’s taking a test, getting the girl, or just being 100 percent comfortable with myself. That’s why I’m passionate about it. I want other people to feel the same way in whatever aspect of their life they can feel comfortable about. There’s no limits to what we can do.

KE: Why are hip-hop artists attracted to BTH apparel?
AD: Rap music has always been my thing. I love it.  I love finding new urban hip-hop artists. It is something that I have always been into so I use my personal passion for music as a networking tool for BTH.  It is so cool that I can go through my iPod right now and most of my favorite artists own BTH shirts, I am really proud of that.

KE: Being a college student, how do you find time to dedicate to BTH?
AD: It is really a handful of things that keep me in balance between BTH and school.  I luckily do not value sleep at all so whenever I am not working on school stuff, it is company time.  My CFO Andy DeLenamy along with my CCO, Ryan Follweiler is on the ball and help me out so much everyday with promoting and building BTH.  I live and breathe BTH, it is my baby, so I am always promoting and social networking to help it along.  I do get lost in the mix sometimes and go to concerts when I should be working on school but then I realize that I only have these four years of school and BTH is not going anywhere, so school is my main priority.

KE: Being a young company with much competition in the T-shirt market, what is BTH’s biggest challenge?
AD: Although we thankfully have not hit a plateau yet or have been in debt, we’ve only been able to grow as much as our funds have. We are growing and gaining finances but no one is getting paid yet or have any intention on getting paid anytime soon.  I have bigger visions than our budget allows for.

KE: Speaking of your visions, what are they for BTH?
AD: We have a lot. We want to expand the actual line itself into other types of merchandise. We are now an LLC, which allows us to put on concerts, sell music and clothing. I also want to sponsor different types of ventures. We’ve sponsored many music artists, blogs, etc. We’ve gotten shirts on pro athletes. I am in the talks now of entering pro Mixed Martial Arts with sponsorship. In general, I want to say this time next year, we are one of the biggest lines in our region.

KE: What shirt are you most excited for right now?
AD: It hasn’t come out yet, however it’s more of a campaign than a shirt. The shirt says “One day I will…” and we have a campaign that’s going to call for people to make Youtube videos and send them with what they wish to accomplish one day. This is really bringing it back to our core. Whether it’s one day I will : sell x amount of albums, or travel to France, or provide a better life for my family, or graduate, etc. The idea is to tell yourself “One day I will…,” and accomplish it. It can be qualitative, or quantitative, but having a goal and purpose in life is what we’re all about. That’s Believe the Hype at the very core. 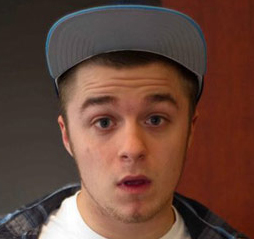