For nearly three years, GreenBeing in downtown Scranton has been a destination for environmentally conscious shoppers on the lookout for vintage and handmade fashions.

The seed for GreenBeing was a dream owner Cristin Powers had back in middle school, which took root in the form of a home-based handbag business and has flowered into the shop in the city’s 300 block of Adams Avenue.

Powers, 28, opened GreenBeing after earning an associate’s degree in fashion merchandising management from the Fashion Institute of Technology in New York City and a bachelor’s in business administration with a focus in retail marketing from Marywood University. She’s made the store a regular stop on the city’s monthly First Friday art walks, organized the Re:Cycle on Adams block party in 2009 and will be a part of the second annual Arts On Fire Festival in June. On a wholesale basis, Powers also sells coffee sleeves that she’s designed, and next month she’ll be debuting  at her store.

Keystone Edge (KE): When you entered the  of Technology, what were your career goals?
Cristin Powers (CP):  To own a store. I decided in eighth grade that I wanted to own a store. I wanted some sort of clothing store with a small section of things that I made. It’s changed a little bit. People might consider (GreenBeing) hippie, but initially it was way more patchwork-y than it is now.

KE: What did you do in the year between your graduation from Marywood and opening GreenBeing?
CP: I worked at a store in Scranton called House and Life and made handbags and sold them at (Scranton coffee shop) Zummo’s.

KE: What is the philosophy or mission statement of GreenBeing?
CP: Just to do business with the environment in mind.

KE: What do you sell?
CP: In two words, it’s vintage and handmade. The handmade is local and mostly up-cycled or organic cotton/hemp.

KE: How do you acquire your products?
CP: I think right now I have around 23 local artists on consignment and a handful of those consigners also bring in vintage on consignment.

KE: How have you connected with these local artists?
CP: Sometimes they find me, sometimes I’ll just do a Web search or search Etsylocally. For the most part we just cross paths, at local events, too.

KE: When you opened GreenBeing, what was the initial reaction from the community?
CP: It seems like people get excited to walk in. Their reaction always seems to be, “It’s so nice to see a store like this here.” I think they feel that something like GreenBeing, or the rest of the places on the block even, fit into some bigger city, and they’re happy to see it locally.

KE: Northeastern Pennsylvania has a reputation for not always embracing new or unique ideas. Did you have any doubters early on?
CP: There were a lot of naysayers at first. I remember getting a Google alert when I was first opening, and there was a website City Data, and people were really ripping me on there, which is kind of rude, because I was 25 then and then having “adults” rip your store and your idea online. But then I was just like, “It doesn’t matter, those people probably wouldn’t be my customers anyway.” So I think of course you’re always going to have naysayers, but there’s always another side to that: the people who really enjoy it and come in.

KE: How have you promoted and marketed GreenBeing?
CP: Press, and I’ve done some Facebook advertising to target university students. Local events like First Fridays and Arts On Fire, which is coming up; I’ll be participating in that.

KE: How have those events helped you develop your business?
CP: At out-of-town events like at Bethel Woods, that will help bring people to my website and help me find more handmade consignors. Or for instance, I also do wholesale for coffee sleeves, so once I did Bethel Woods, their museum was interested in my coffee sleeves. I also sell to a roaster up there too.

KE: How did you start making coffee sleeves?
CP: A few years ago I wanted to make something smaller than a handbag that still represented me, and I was staring at my coffee from (Scranton coffee shop)Northern Light, and I thought, “Oh, how about a coffee sleeve?”

KE: GreenBeing will be adding classes soon. Tell us about that.
CP: We’re going to have crocheting, embroidering, screen printing, painting, bookbinding and sewing.

KE: What are your goals for the future of GreenBeing?
CP: I just want to continue to do more sales outside of Scranton, so online and wholesale. 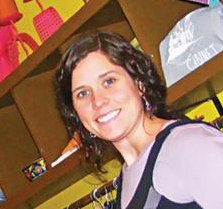