Victor Allis spent much of boyhood in his native Netherlands solving puzzles. He loved playing with his Rubix Cube. That boy grew up to be a computer science major who went on to teach at his old university in Amsterdam.

Allis, though, felt too comfortable there. He missed solving puzzles, so he left the cozy confines of academia for the business world, which also proved too comfortable. The last straw was when the small technology company he worked for rejected his idea to create a software package. Shortly thereafter he went out on his own to create Quintiq in 1997. In September of that year, he and four other computer programmers set out to create a custom-made scheduling application for one of the world’s largest aluminum hot mill operators. The algorithms created were pivotal in forming Quintiq’s building blocks.

The company has since grown to a 700-person global powerhouse, including 70 at its suburban Philadelphia office in Radnor, which serves as corporate co-headquarters in addition to its founding office in the Netherlands. Quintiq’s supply chain and optimization software, which empowers companies to make better planning decisions, is in use by more than 500 clients in more than 70 countries.

Allis moved to the U.S. in late 2010 and makes his home in suburban Philadelphia, a place he has comed to love.

What ultimately made you go out on your own?
I think I’ve always been and still am an optimistic person who always believe that change is good instead of scary. I could always go back and find another job if something didn’t work out. Making the changes never felt like a problem. When we started the company, the first question was how do we get funded? What we didn’t want to do is ask a venture capitalist for a lot of money and then be controlled by them. Instead what we did was we each put $10,000 on the table and then got another $200,000 from a bank loan. Then we got some contracting work that earned money to pay the interest on the loan while we developed the product.

How long did that take?
After two years, we developed the product and made a profit in contracting that allowed us to be self-sufficient. The next big challenge was finding our first customer. On the 10th of March in 2000, we signed our first contract.

You remember the exact date?
The reason I remember is if you go to customers and they ask questions like ‘How big is your company?’ ‘Five people’ is not a good answer. Then it’s ‘Tell me about your customers.’ Well, ‘You’re the first.’ Not a good answer. But the good news is once you get the customer, they don’t want to be the only customer so they’re happy to be a reference. We’ve been blessed. Within three months of going to market, we signed up our first customer for a significant deal. That was the start of our incredible growth.

How did that growth happen?
We invited several companies for a seminar to show a demo of their situation in our software. For those people who came we did it free of charge. We gave a taste of what we can do and solved one of their smaller problems. We sold them on the power of our product. I believe more than anything in the power of just showing what you can actually do. Marketing and sales are important but at the end of the day when you’re sitting in a room with a customer they want to know you can actually help them.

Talk about a significant challenge you’ve overcome.
We have in our company, far more than most other companies, an enormous culture of openness. It means every quarter I get on the phone with the whole company and explain to them where stand. Growth, hiring, cash in the bank – we share it with the whole company. I do it in Europe, a presentation for 250, and do it at the Radnor Hotel, do it for the Asia-Pacific office via Skype, so everyone can hear about every quarter and ask questions if they like. We had a good 2008 despite enormous problems in the fourth quarter of 2008. When 2009 started, we all felt it could be a difficult year. I sent an email to the whole company and said ‘Guys, this is going to be a really difficult year. We had a great year in 2008, but the next two quarters we may not sell anything at all.

So what we did was we said to them we don’t want to lay anyone off. We don’t want to hire anyone, but we also don’t want to raise your salaries. We’re not sure we can afford it. We didn’t want to raise salaries and then have to fire people later. We’re going to tell you what your raise would have been in normal times and not pay it to you. At the end of the year, if we make a profit, we’ll give you a raise retroactively that we can afford. We sent an email to everyone. Over 90 percent of the responses said that’s fine, anything to keep going. We had a few responses that were disappointed. We came through the year with a fourth quarter that was amazing after three terrible quarters. We had a small profit and paid it out to the employees. We had a very big challenge and chose to make everyone a part of the solution.

How do you differentiate yourselves?
If you look at our space, I think there are three categories. You have SAP and Oracle, big players and part of what they offer is solving planning problems, but they really don’t do a very good job of it. When planning becomes complex, their ERP offerings don’t address supply chain planning as well as they shoud. Some of our customers have SAP but use us for planning and scheduling. Then there are big software companies that try to do it themselves. There are niche players as well. There’s a company that only services the steel industry. There’s a company in Australia that only does things in mining. Although they typically have a lot of industry knowledge, they’re not really experts in planning in the broader sense. There’s only one company at the moment that bridges that gap, and we do it with a single software solution. That’s the big differentiator. It’s so flexible we can provide a 100-percent fit to all those different customers. 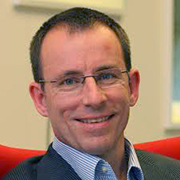