In 2008, Kanin, a serial entrepreneur in Russia, had just sold his company, Aero Solutions, which specialized in radio-frequency identification, to Systematica for $2 million. He used the money to start research on a wind turbine that would be safe enough to use near residential areas.

Now the company, which has offices in Moscow and St. Petersburg, Russia, has built successful prototypes and is seeking venture capitalists and industrial partners to take the product to market. The safe, super-efficient turbines hold the promise of affordable green energy.

What inspired you to start Optiflame Solutions?
Wind power generation is very attractive to business for green energy. I was curious to know why didn’t we have any of these wonderful machines (wind turbines) where people live and energy is consumed?

We were completely new to wind power; we had a background in aerodynamics and computer science, but none in wind power. So we started to check into it. We found that first, it’s impossible to place wind turbines in residential areas because they’re quite dangerous . . . they can be destructive if they’re too close together, and can injure people nearby. It can be like a bomb. There are regulations that say that turbines should be remote from each other. The risk is from the open blades.

The frequencies generated by these turbines is not safe for human beings, birds and other animals, so they have to be remote from consumers. So the infrastructure costs are prohibitive. We wanted to make a machine that would avoid all of these troubles. We hired two teams to double-check each other. After a few months, both teams found it was possible.

After that we started to work on the first prototype, using a computer model and simulation. We thought it might lose efficiency in increasing safety, but after two years we found that the opposite was true.

Now we have a working model which is 10 to 18 percent more efficient than the old machines. But there is a limitation in size; the biggest traditional turbines are 60 to 70 meters; our two models are small and medium for residential areas (two and five meters), and we have simulation models of 15 and 20 meters.

What resources did you use to get your company started?
We were awarded a grant from Russia’s Skolkovo Foundation, and grants from the government to work for 10 years in Russia without taxes, for R&D.

We communicated with the University City Science Center in Philadelphia, and I visited several times to let them know about the project. We knew that the markets of Europe and North America are more attractive because the people are more responsive to the environment. Russia is still a gas and fuel economy.

The Science Center invited us to apply to a special program for foreign companies, for technology exchange and so forth, and we applied and in a week or two were accepted.

The charm of working in the Science Center is networking, and help with finding investors and industrial strategic partners who will help us jump from the lab to the market. This will help us to establish production in the U.S.

Have people expressed interest in your product?
The big question we get from people in the commercial world is, Where can we buy this product and when? We have contact with the City of Philadelphia, the state of Pennsylvania and the U.S. Department of Energy; they all say we should start producing and they will support us.

We have some interest from venture capitalists, but they are cautious because we are a Russian company. But we are planning to be an international company, both Russian and American.

How many people would your company employ?
In the beginning, for our smallest model, it would be 30 to 34 employees. Ideally, in a couple of years, we could grow to 100.

What is your next step?
We’re looking for investment to help in producing the first turbines to take to market. 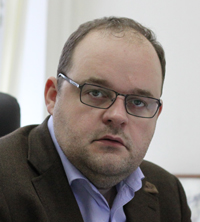