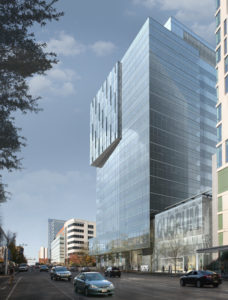 The 14-story building rising in the heart of the University City Science Center campus will house the organization’s corporate headquarters, Boston-based CIC, an expanded Quorum (the Science Center’s “clubhouse for entrepreneurs”), along with lab, office and retail space. It is scheduled for completion in early 2018.

“3675 truly marks a new era for innovation, access, inclusion and discovery here in Philadelphia,” says Science Center President Stephen Tang. “Imagine the discoveries that will be made here, the young minds inspired to pursue science, and the communities that will be introduced to the power and promise of technology. That’s our collective vision for 3675 Market Street and uCity Square.”

Anchor tenant CIC, founded in 1999 in Cambridge, develops startup hubs “in premium locations of future-focused cities,” including Miami, St. Louis and Rotterdam. According to the company, CIC client companies and affiliates have raised more than $3.3 billion in venture capital and $3.9 billion in IPOs and publicly disclosed exits.

“It’s not often that you hear about Philadelphia attracting a Boston-based company,” adds Tang. “CIC’s unique recipe combines world-class facilities with intense, productive innovation communities. That’s a perfect environment for seasoned, serial entrepreneurs. And that’s exactly what we need more of in Philly.”

The Science Center’s Quorum will establish a higher profile at 3675, occupying 15,000 square feet on the ground and second floors, and expanding its events and programming. The Science Center’s FirstHand Lab will also relocate to the new building with the goal of introducing more middle and high school students to careers in STEM (science, technology, engineering, math) and STEAM (add an “A” for arts).

Described as a “hub of discovery, innovation and entrepreneurial activity,” uCity Square is a partnership of the Science Center, Wexford Science + Technology and Ventas. It is expected to be fully built out by 2025.