By Ben Franklin Technology Partners of NEPA on March 14, 2017

In an earlier installment of “Incubating Innovation”, I wrote about the power of getting your first sale. This month, I’ll examine the long hard climb along the sales curve.

True business geeks might be familiar with the following graphs. The first is known as the Gartner Hype Curve, developed by market research firm Gartner; the second is the classic Technology Adoption Lifecycle Curve, made famous by author and professor Geoffrey Moore in his classic book on new product sales Crossing the Chasm.

A few dozen technologies are plotted along the curve. Some are familiar — the Internet of Things, wearables, autonomous vehicles — and appear near the top of the hype curve. This is when the general public becomes aware of developing technologies, leading to epic amounts of investment and buzz. As the graph implies, expectations for the adoption of these technologies are generally overhyped. 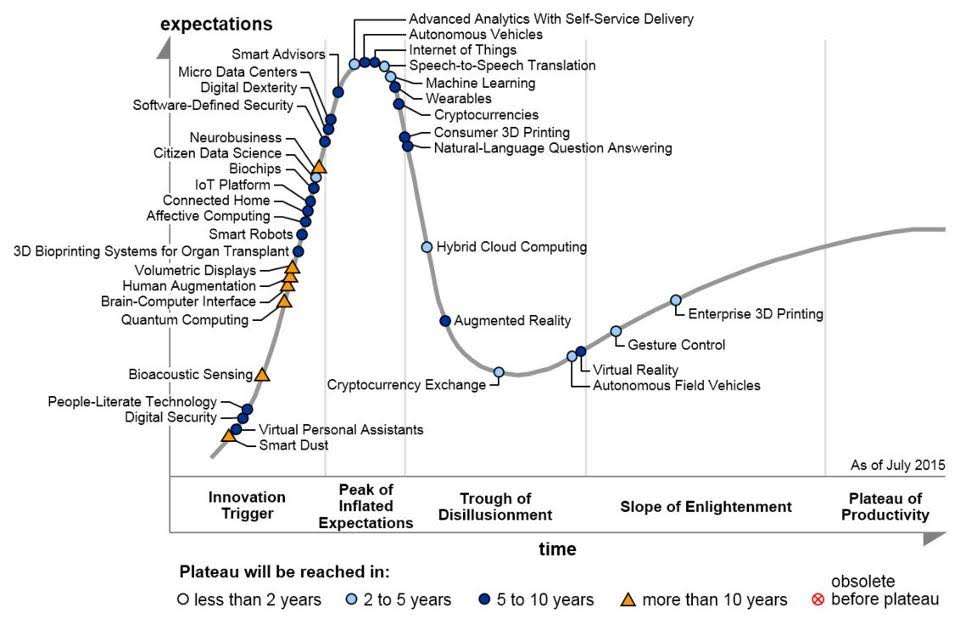 While news of the technology feels ubiquitous, actual market penetration is still minimal. Compare this to technologies like gesture control and enterprise 3D printing that are much nearer to or on what Gartner refers to as the “plateau of productivity” — when a technology has become mainstream in its adoption. This means customers are actually buying solutions with these advances embedded.

Some technologies mature across the curve more quickly than others; some fall out of favor entirely and never mature. But they all have one thing in common: Sales of new technology-based solutions move through a period in which every potential customer talks about buying the product…but probably isn’t actually going to. For startups developed around the newest technologies, this phenomenon makes sales of their products seem…so…close, when in fact they’re probably not.

Enter the Technology Adoption Lifecycle model. Many people casually refer to the earliest buyers of new tech products as “early adopters.” However, according to the model, early adopters are the second stage of customers. The first stage is actually “innovators.” Getting early sales for tech startups is extremely difficult because there are so few innovators who also have the power to make purchasing decisions.

Innovators are those rare individuals willing to engage new technologies based on the promise of a benefit rather than proven evidence. Even in the most innovative industries, only about 4 to 5 percent of prospects are willing to pilot a new technology. More conservative industries like municipal government or public education are often in the 2 percent innovator range, which is why so many investors tend to stay away from those sectors.

Over the years, lots of our clients have mistaken an excited prospect at a trade show for an innovator. Or a startup might spend extensive time with the head engineer at a company — they love the product but spend months or years not buying it!

More than 95 percent of organizations are early adopters or slower, meaning their main way of deciding on your product is whether or not other companies have bought it. They need the validation of other customers similar to themselves. It’s a dilemma for startups and ruins many in the “valley of death” chasm depicted on the graph. Most clients are not busy trying to adopt the most exciting new technologies, but rather trying to incorporate widely adopted technologies already reaching their “plateau of productivity.”

The most important lesson from all of this is to be aware of whether your technology is actually being adopted by your target market or merely being discussed. And be aware of both the innovator-like qualities and decision-making authority of the individual customers you’re targeting.