As a Penn State plant sciences major, Hunter Swisher stumbled on a promising technology. His product boosts the survival rate of transplanted seedlings and makes them more drought-resistant, while reducing the environmental consequences of wasted fertilizer.

Phospholutions, Swisher’s State College-based startup, manufactures RhizoSorb, a granular treatment that “emphasizes root production over shoot growth, acting as a natural growth regulator, to make shorter and more compact seedlings more likely to survive the transplant process,” the company explains on its website. “Roots exist to draw water and nutrients from the soil. RhizoSorb works by forcing roots to grow deeper through the soil in search of key nutrients. The deeper roots reach, the longer it takes for the soil to dry out, meaning more water is available to the plant in times of drought.”

“Fertilizers consume over one third of the energy used for crop production in the United States,” explains Swisher. “Sixty percent of the fertilizer applied is either washed away or released into the air. To compensate for this loss, we overfertilize. As nutrients are washed downstream, we see tragic ecological damage, such as algae blooms that result in large dead zones.

RhizoSorb is targeted at the turf industry — golf courses, athletic fields, lawn care and sod production — and has had considerable early success with golf courses. Swisher says about 35 courses in Florida, Pennsylvania and New Jersey are already using the product.

A critical early test was undertaken at the Penn State Golf Courses.

“Sure enough what he said was going to happen to the turf, it did,” enthuses Superintendent Rick Pagett. “It doubled our root size which is phenomenal.”

Phospholutions also sells “Soil-Saver,” a product aimed at home gardeners and sold locally at The Barn at Lemont.

Looking ahead, Swisher expects to expand distribution of RhizoSorb this fall and has his sights on new markets. 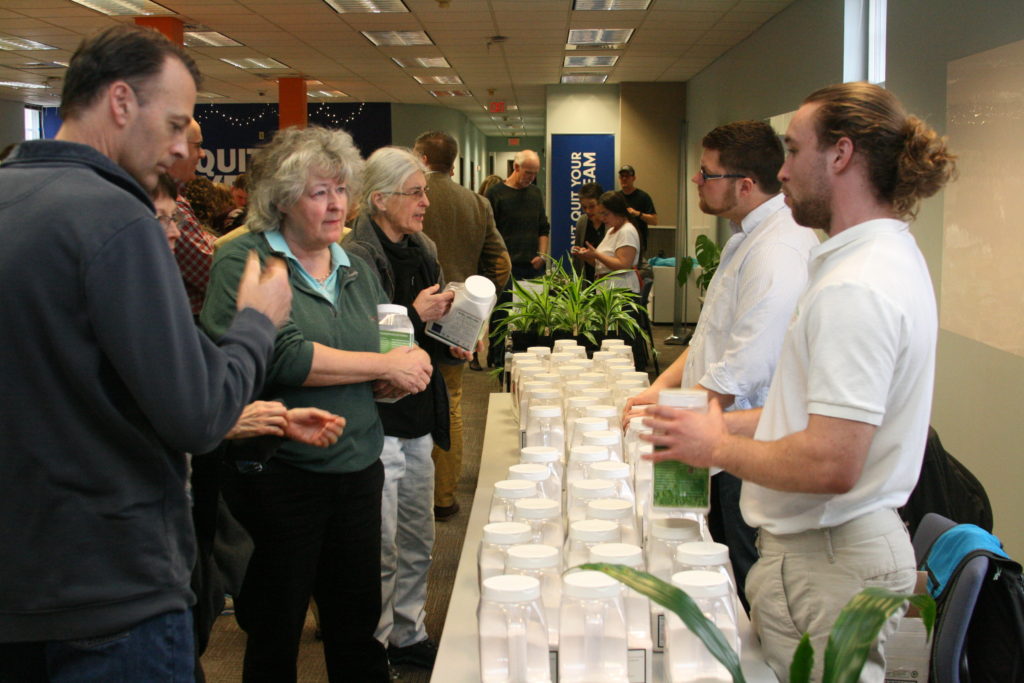 “Recently we have been working towards some very large remediation projects to reduce the fertilizer entering our waterways in areas like the Chesapeake Bay and the Everglades,” he says. “As we move forward over the next year, we are expanding across the country into the turf, home garden and big ag market. The hope is that we can leverage our success in these industries to really move towards remediation on a large scale to eliminate the environmental impact of fertilizers.”

Swisher, who graduated in December 2016 and launched the company while still a student, smartly navigated the State College entrepreneurial ecosystem.

“I approached the Penn State Small Business Development Center for business consulting on how to start,” he recalls. “I applied for the Summer Founders Program, which provided me with $10,000 to stay in State College to work on my business. I simultaneously went through the summer cohort at the Happy Valley Launchbox. I won a few pitch competitions that provided me the funding to keep working on it through college. I went through the TechCelerator @ State College before graduating…and am now devoted full-time to being CEO of Phospholutions.”

“Without the resources at Penn State, I’m not confident I could have made Phospholutions a reality on my own,” he adds. “The support offered by university initiatives is absolutely incredible. It’s allowed me to take an idea and turn it into a real company, making a true impact in the world.”