A buzz in the valley

This story was created in partnership with the Mon River Towns Program | www.monrivertowns.com

Listen as you walk through the towns on the Monongahela River. You’ll hear some traffic, an airplane or two, kayak paddles pulling through the water, an occasional motorboat. But what you’ll hear above all those pedestrian sounds is one you might not expect: buzz.

Because there is a buzz in the Mon Valley, one that has been building for the last few years. It’s buzz about water recreation, buzz about growing tourism and expanding businesses, buzz about river festivals and public art. It’s a buzz coming from the riverside communities as they turn their focus towards the natural asset that connects them all together.

Towns built with their backs to the once heavily industrial Mon are now putting the river front and center. As water quality improves, local residents fish and boat in greater numbers. People are visiting these towns for the opportunity to spend a day on the water. As a result, the towns are home to an increasing number of boat launches, festivals, riverside restaurants, and other amenities.

Change comes slowly. And it seems to come even slower to small Pennsylvania towns with limited resources. To that end, in 2013 committed civic and community leaders from 27 Mon Valley communities banded together to form the Mon River Valley Coalition with help from the River Town Program.

Founded in 2010 by the Pennsylvania Environmental Council, the River Town Program was initially headed by Cathy McCollom of McCollom Development Strategies. In 2011, Donna Holdorf of the National Road Heritage Corridor assumed leadership. McCollom has continued to help local communities apply for and receive grant funding from various public and private partners, including the Claude Worthington Benedum Foundation, the PA Department of Community and Economic Development, and the Pennsylvania Department of Conservation and Natural Resources.

“Our overall objective is to provide an efficient, effective, regionally-based resource to help local communities recognize the river as a potential economic and community asset,” says McCollom. “The goal is to improve the vitality, stability, sustainability and prosperity of the communities, and to position them to attract new businesses and jobs to the area.”

The River Town Program and the Mon River Valley Coalition have worked together on projects from building infrastructure to marketing the growing number of events held along the Mon each season. All these efforts highlight the value of the river as an economic driver and quality-of-life asset.

For example in Fredericktown, a new gateway project includes the installation of large-scale murals on either side of an underpass – one facing the entrance to town by car, one seen from the river – that are being painted by Todd Pinkham of nearby California University of Pennsylvania and his students.

“It’s a real group effort,” says Pinkham. “Other Cal U departments are also involved. The Digital Media Department is working on the typeface and stenciling for the overhead bridge.”

Depicting highlights of Fredericktown’s history — and painted with marine grade paint — the murals will last for years to come.

“It’s been both a challenge and an opportunity for our art club students,” says Pinkham, who has been a professor at Cal U for 16 years. “I fell in the water once so far, but it was for a noble cause.”

Ken Kulak, a Monongahela architect and Director of Accounts and Finance for the town of Monongahela, is excited about the impact on concertgoers in the summer and residents year round.

“Monongahela is open to progress and moving forward,” says Kulak. “I moved here [in 1993] the night before one of the region’s worst snowfalls. I hadn’t yet brought my personal items — so had no hat, coat, or gloves. I woke to 30 inches of snow. A woman down the street kept her bar open for me to eat and a local police officer lent me a coat and gloves. I knew it was a great place.”

In Charleroi, the Mon Valley Rowing Club is slated to start taking registrations for its youth rowing program. Operated from the town’s boat launch, the club is led by Nathanael Stevens, campus pastor of the Rostraver Bible Chapel, and will be coached by a collegiate level rowing coach. 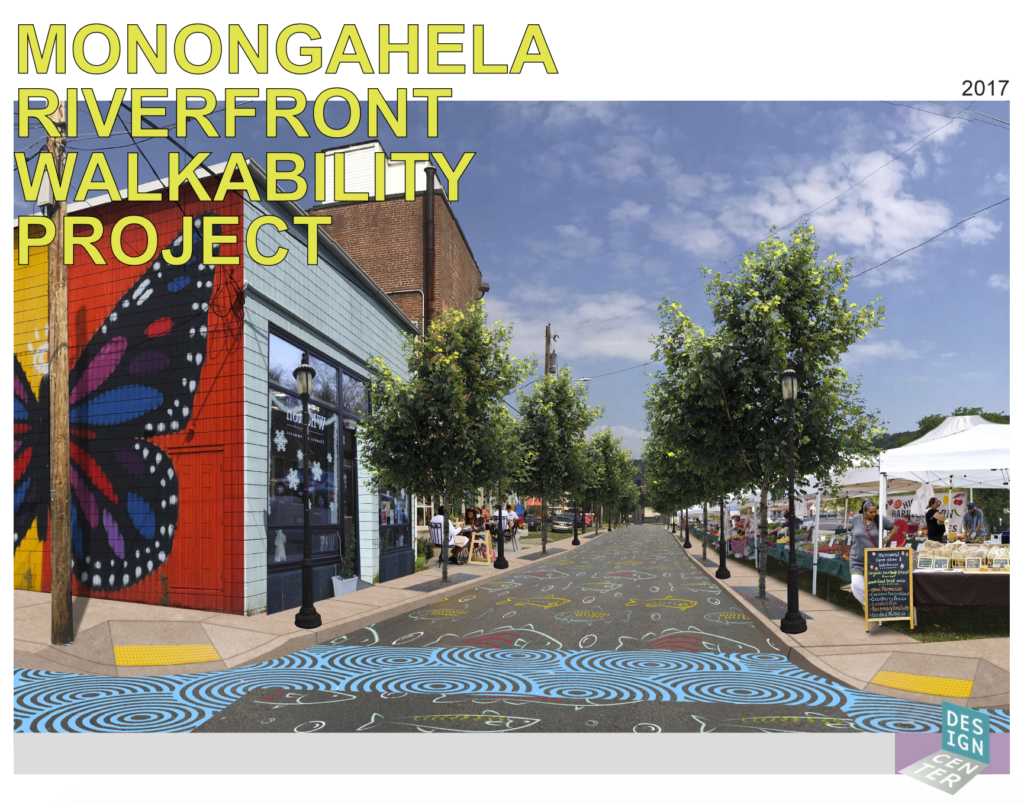 “Kids here would not otherwise have access to such an elite sport,” says Stevens. “Rowing can be a real pathway to opportunity and to scholarships, but it is also a low-impact lifetime sport that builds confidence and great physical fitness.”

The rowing club will be open to students in grades 8 through 11 with initial registration offered this fall. First up is a swim test on December 9 at the YMCA in Monongahela.

A father of five children, rower, and former sailing instructor, Stevens is very aware of how water sports can enhance a young person’s life. He looks forward to bringing that opportunity to the youth who make their homes near the Mon. The crew team should compete in their first race – called a regatta – by fall of 2020.

These three initiatives are but a few examples of the renewed interest in the river. Groups of paddlers, such as the West Virginia-based Morgantown Area Paddlers, come to Pennsylvania to cruise the Mon. Affectionately known as “MAPPERS,” the paddlers hold about 20 low-key outings per year; these events are open to all and posted on the group’s Facebook Page.

If you prefer a bit more competition, check out Belle Vernon Canoe & Kayak Race. Once a small one-day event between Brownsville and Belle Vernon, the annual happening has evolved into the week-long Monongahela River Community Festival, hosted by the Belle Vernon Friends of Recreation. Held in July, the popular race draws kayakers from far and wide.

The excitement in the Mon Valley is beginning to be noticed elsewhere in the Pittsburgh region. Ben Brown, Chief Executive Officer of the Mon Valley Alliance (MVA), is slated to speak about the exponential growth of business opportunities in the Mon Valley at the Pittsburgh Business Times’ event series “Corridors of Opportunity.” While MVA’s focus is primarily on business growth, it was recently named as the managing organization for the Monongahela River Water Trail by the Pennsylvania Water Trails Partnership.

“We were pleased that MVA undertook this responsibility on behalf of the region and happy to see it partner with the Rowing Club,” says McCollom. “The water trail clearly represents both a recreational and business asset for the Mon Valley.”

So as you walk along the Mon next spring, along with the sound of dipping paddles, the purring boat motors, and the occasional barge whistle, you may also hear the call of the coxswain directing the crew members of the Mon Valley Rowing Club. Oh, and the buzz. You will definitely hear the buzz.