On March 14, as Pennsylvania was entering widespread shutdown, Eight Oaks Farm Distillery founder Chad Butters saw a dismaying news story. Price-gouging and consumer hoarding of hand sanitizer was making it difficult to get this essential protection to those who need it most.

Making hand sanitizer is pretty simple, if you have high-proof alcohol. At New Tripoli’s Eight Oaks — located about a half hour northwest of Bethlehem — a light went on. The distillery had the equipment, the people, and the skill set. With a public recipe from the World Health Organization in hand, Eight Oaks was ready to help.

March 14 was a Saturday. The following day, the company’s board and executive team convened. They set an initial goal of producing 5 to 10 thousand bottles of sanitizer. On Monday morning, March 16, the staff got their new instructions.

Eight Oaks was not the only distillery to realize it could help fill a critical need. In mid-March, Bethlehem’s Social Still was also mobilizing. Co-owner Adam Flatt heard that a few distilleries nationwide were using their left-over product to make hand sanitizer.

“I was interested in the process and began to look up how we could do the same,” he recalls.

They got a call from the Lehigh Valley Health Network (LVHN), which wanted to produce sanitizer, but couldn’t source the necessary alcohol. That same day, Flatt met with LVHN leaders and donated about 10 gallons of high-proof ethanol to a compounding pharmacy as a start. The next day, Social Still produced its own batch of sanitizer, in screw-top medicine bottles provided by LVHN. The distillery announced via social media that they had sanitizer for medical workers, and the response was immediate: Social Still donated 600 bottles.

“The hard part of the process is making the alcohol,” explains Butters. “It’s the same basic alcohol you would make for anything.”

With 95 percent pure alcohol on hand, as per the WHO’s recipe, the rest is fairly simple: Post-distillation additives of glycerin, hydrogen peroxide, and water complete the recipe. Eight Oaks scrambled to get a brand-new supply chain going, and mixed the sanitizer in giant buckets, pouring the concoction into Gatorade coolers to bottle it.

Getting small plastic bottles for the sanitizer was the biggest challenge, but a nearby resident who used to run a soap company quickly donated thousands of unused bottles. In its first two weeks on the project, Eight Oaks produced 5,400 eight-ounce bottles of sanitizer. Then a donation of 65,000 eight-ounce bottles from Nestle kicked the effort into high gear.

By April 21, they were making 4,000 gallons of sanitizer a day for distribution in eight-ounce bottles, as well as a 64-ounce size. All recipients pick their batches up at the distillery.

At Social Still, finding bottles was also a core challenge (the original screw-top bottles proved tough to use), with flip-top and spray lids out of stock everywhere. But piecemeal community donations — 150 bottles here, 600 there — kept the project running. After a donor with a shuttered Etsy business gave bottles, the Allentown police department found itself with snazzy purple-and-chrome dispensers. 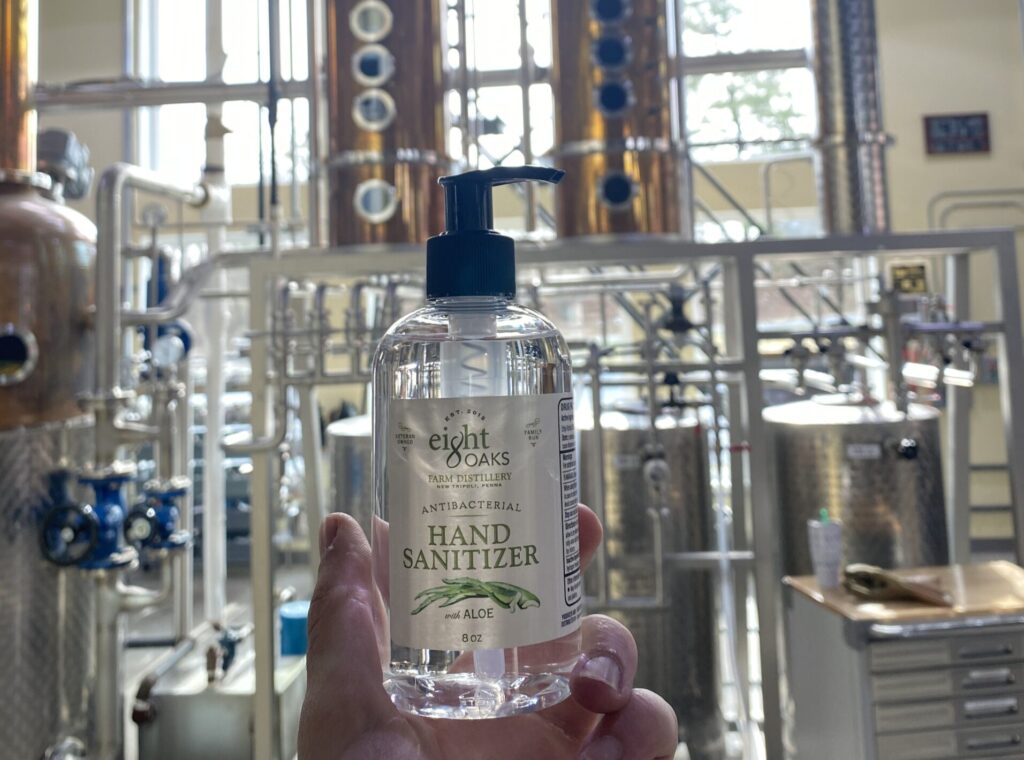 Bethlehem’s Willow Park Pools stepped up with a donation of peroxide and the distillery used premium alcohol that had been destined for vodka. So far, Social Still has been able to produce and donate about 5,000 bottles of sanitizer (eight-ounce bottles up through gallon-size).

Distribution is also a hurdle.

“How do we possibly decide who has the most critical need?” says Butters.

After a March 18 CNN Business story, contacts flooded in. Eight Oaks initially partnered with emergency management directors in Lehigh, Northampton, Carbon, and Schuylkill Counties who strategized on where to send the sanitizer, along with procurement staffers at medical facilities. Now the effort has expanded to Berks and Chester Counties.

“It’s been very humbling to see who all is out there and what they’re doing,” says Butters. “It’s given me a new focus and appreciation for everyone.”

Over at Social Still, Flatt says he was getting about 100 requests a day for sanitizer once folks heard about the first 600 bottles. His team connected with a variety of emergency response leaders in Bethlehem and beyond, including EMS, police departments, and prisons, plus cancer-care, pediatric, and elder-care facilities.

“Our goal was to get it to the most vulnerable, and the people who are on the front lines,” he says. “All of our time and all of the hand sanitizer was donated to date. I haven’t even explored what funding or compensation might be available for the hand sanitizer. I’ve mostly committed to donating that product as my part in this incredible challenge.”

The distillery has an onsite restaurant, and they’re already stretched thin figuring out how to support staff while the shut-down is in effect.

At Eight Oaks, there’s a structure in place, with a donation page that supports the production of sanitizer for first responders and nonprofits (Butters estimates that every dollar given equals one eight-ounce bottle). For-profit businesses who want sanitizer can get it, too, for a nominal fee. Eight Oaks plans to make sanitizer available to individuals for a “very affordable” price by the last week of April.

“When I look at this whole thing, the thing that sticks out at me is community,” says Butters, shouting out the Eight Oaks team, a donated storage trailer and forklift, the individual givers, and local restaurants providing meals to the distillery’s bottling crew.

“We are so lucky to have a community come together and find solutions to help the greater good,” adds Flatt. He gets very emotional when he thinks, “we were there when it mattered.”