A PA Wilds distillery gets into the hand sanitizer game

This story was produced by the PA Wilds Center for Entrepreneurship and originally appeared on wildscopa.org.

In Kane, PA, along the Route 6 corridor in the heart of the Pennsylvania Wilds, sits CJ Spirits. In normal circumstances, the craft distillery offers tours and tastings, a bar and eatery, and a retail area with gifts for sale. But since the middle of March, circumstances have not been normal for anyone, and this distillery has thrived by adding hand sanitizer to their production line.

Owners Sam Cummings Jr. and Tom Jones started their distillery from scratch, crafting vodka, gin, rum and whiskey using fresh, local ingredients, spring water and state-of-the-art distillery equipment. They sell their wares out of the Kane production site, a satellite store in Pittsburgh, and 10 Fine Wine & Good Spirits locations. According to Cummings, they were looking to expand their distribution when things got put on hold due to the pandemic.

Even though CJ Spirits was mandated to close their in-house dining and switch to a take-out model for the spirits, demand has been high.

“Our bottle business has picked up,” says Cummings. “So it’s been hard to keep enough in stock. We’re actually doing better than we normally do. All the state stores have been closed. Our liquor sales have been very robust, but they have to come to [our business] now. I just hope that some of the business we’re getting now could continue [after the pandemic].”

In addition to the bottle sales, another opportunity presented itself. The partners are pretty active in a distillers’ guild listserv and heard about the FDA allowing distilleries to make hand sanitizer.

“So we followed along that way and got right into it in the beginning,” says Cummings. “But we had to register with the FDA … to basically be an over-the-counter drug producer, which was very complex. But once we figured that out, we actually helped a couple of other distilleries.”

The items needed to produce hand sanitizer include 190-proof alcohol — which they already had to make vodka — stainless steel tanks, glycerin and distilled water. One item they didn’t have was hydrogen peroxide.

“We were able to get that from the Winery at Wilcox,” he explains. “We needed three percent, and they had 35 percent, which we could then take and cut down to make what we needed.”

After a week and a half, CJ Spirits had about 270 gallons of hand sanitizer. But there were a couple issues with their supply line, including sourcing bottles.

“We got in real early on a 10,000-bottle order,” recalls Cummings. “We have friends that work at Zippo [in Bradford, PA] that got us into their supply chain. You know the Ronson lighter fluid bottles? They got us the same bottle. When I submitted everything for the FDA, we had 4-ounce bottles and 5-ounce bottles (those were the ones we got through Ronson) and 750ml bottles, which is the size of our standard vodka bottle.”

Another supply problem was labels. 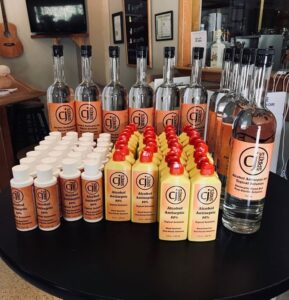 “We had found one company to provide them for us, and they told us it would be three to five weeks, and it’s been like eight,” says Cummings. “But we found another company, and they were able to get it to us in two days. So production is back in full-force, making the hand sanitizer.”

They found more local help when another business in Kane, The Ink Pad, was able to print the labels for them.

Because the labels for their liquor are so much bigger than the ones for the hand sanitizer, they couldn’t use their machine and have to do it by hand.

“One of the hardest parts is labeling,” he says. “That’s 10,000 bottles, all by hand, so I’ve been calling in my kids and my girlfriend … we’ve been labeling non-stop on those. It’ll be nice [to get back to normal].”

With all the local help, CJ Spirits has been able to pay it forward by providing hand sanitizer to the community. Thanks to donations from the Kane Rotary and Cummings Funeral Home, their first 500 bottles were given away free.

“We did our first batch and gave it away to first responders in our community … to local hospitals, nursing homes, the police department and fire department,” says Jones. “And the response to that was overwhelming.”

They donated 300 bottles at their first gathering and another 200 after that with donations offsetting the cost for the distillery. Other groups — including one in nearby Ridgway — made donations and got bottles passed out in their communities.

After that first batch, bottles of hand sanitizer were made available for sale to the general public. According to Cummings, CJ Spirits has made some larger sales to businesses including a water company, a nursing home in Warren, and Casella Waste Systems. 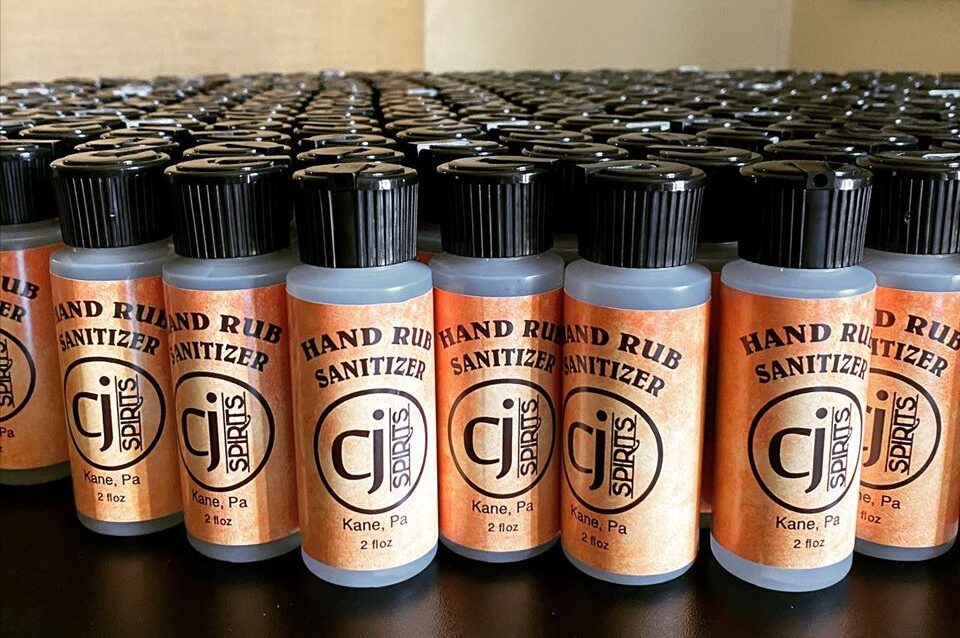 “It has been one of our most challenging times,” he says. “We’re trying to keep producing liquor” at the same time as the hand sanitizer.

And trying to figure out when to order about 8,000 bottles at a time for the hand sanitizer when the demand is there and while they are still allowed to make it has been another balancing act.

“That’s the tricky stuff,” explains Cummings. “We’re just not sure how long we’re going to make this. The FDA is allowing us to make [hand sanitizer] until the end of June, and we do have the supply line shored up.”

Cummings said they’ve been a little busier than normal because of the hand sanitizer production along with bottle sales, but they knew not to take on too much.

“We actually could do takeout for our food, but we’ve been so busy with the other stuff,” he explains. “We’d rather have people support the other restaurants in town.”

Still, Cummings says they’re trying to keep as many of the locals satisfied with their products as they can.

“The townspeople have been real nice,” he adds. “We’ve considered ourselves fortunate to provide some type of service during the epidemic, and especially one that’s good for our town and state and helps everybody out. It’s awesome. We’re very lucky that we’ve been able to maintain work … and at the same time it’s something everybody needs. I know a lot of distilleries are getting into it. It’s been challenging but good.”

*Photos used in this article were provided by CJ Spirits