Scientists and wineries team up to squash the Spotted Lanternfly

Sam Landis, a partner at Vynecrest Vineyards & Winery outside of Allentown, was driving to work one day in late summer 2018 when he realized that the Spotted Lanternfly was about to be a big problem.

“A neighbor flagged me down,” he recalls, and told him to look at a tree. “The whole trunk was crawling. Lo and behold, a couple weeks later, walking through the vineyard, every grapevine was covered.”

Vynecrest, which is in its 46th year and bills itself as the oldest existing vineyard in Lehigh County, had become a breeding site for the Lanternflies.

“It was dramatic, it was quick, it was really scary,” says Landis.

Vynecrest has 25 acres of grapes, vines nurtured row by row for decades. It produces 25,000 gallons of wine annually. Now the team wondered if all that time, all that effort, and all that money would it be washed away.

The invasive insect, which is overtaking forests and farms alike in a growing area of Pennsylvania, isn’t native to our region. It hails from China, Bangladesh, and Vietnam, and researchers think it initially touched down in Berks County, probably hiding in a shipment of lumber goods. Spotted Lanternflies were first spotted here in 2014. It was flagged right away as a potential pest species, with homeowners being made aware that they may have to Google ‘Find Pest Control Companies Near You‘ or talk to their local pest control experts so they are prepared in case an infestation was to hit them.

No one knew what was coming.

“Flying my nerd flag high, we don’t have anything like this insect in the area,” explains Karen Verderame, the Animal Programs Developer and Insect Specialist at The Academy of Natural Sciences of Drexel University in Philadelphia. She calls the Spotted Lanternfly “a beautiful insect and an interesting insect,” but also a serious problem.

When the first adult Lanternflies were spotted in Berks, the county went under quarantine – all outgoing vehicles and shipments were subject to inspection; this bug loves hitching a ride – but it was already too late.

“I don’t think the word got out fast enough,” says Verderame.

The bugs hit Montgomery County in 2016, and the list kept growing in 2017. In 2018, they arrived in Philadelphia, where they’re now swarming, and began invading New Jersey. Twenty-six PA counties are now under quarantine.

Lanternflies are similar to cicadas, Verderame explains. In spring, nymphs emerge: wingless babies “about the size of a chocolate chip cut in half,” black with white spots. They grow and change color to red. By late summer, they morph into their adult form, sporting gray outer wings with distinctive black spots and brilliant red inner wings. In fall, they lay their eggs and the cycle continues.

According to Heather Leach, Spotted Lanternfly Extension Associate at the Department of Entomology at Penn State, these insects lack natural predators in Pennsylvania and can feed on a wide range of vulnerable greenery. In Asia, Lanternflies prefer a plant called Tree of Heaven (they eat it here, too; it’s another invasive species), but the Lanternfly’s Pennsylvania diet now includes everything from roses to hops to orchards to vineyards. As if that wasn’t bad enough, the insects also excrete a sweet substance that causes damaging mold growth. It all spells major trouble for local agriculture.

“It’s a sap feeder, feeding on the plant juices,” says Leach. And that makes the damage tricky to spot, unlike other pests’ visible chewing. It might take a year for the affected plant to succumb – or to become more susceptible to other damaging forces, such as cold or wet weather, it might otherwise have withstood.

“If you don’t stay on top of it…they’ll suck all the sap out of the vines,” explains Zach Waltz, operations manager at Waltz Vineyards Estate Winery, located about 30 minutes northwest of Lancaster. “And then you won’t see [damage] until the next year because the vine can’t store any carbs,” and dies off over the winter.

“We could sustain a lot of damage this year and still harvest a good crop,” but next year could be ruined, he explains. “We haven’t really grasped the potential impact this will have not just on the wine industry,” but on hops and forestry, too.

“Last year was the first year we saw any – we saw maybe a dozen over the whole season,” says Waltz. “Come this summer, there’s millions of them.”

At Vynecrest, Landis estimates that they lost up to 1,000 vines the winter before last, likely a combination of Lanternfly damage and bad weather. He says that for the last two harvests, they’ve brought in a smaller amount of fruit than they’ve ever had before.

And for many vineyard owners, Landis points out, it’s not just agriculture, it’s agro-tourism. Wine sales depend a lot on the visitor experience onsite, and the Lanternflies are harming that, too.

“When every person who gets out of the car is swatting their head or stomping the ground,” it’s hard to enjoy a visit,” he says.

In their peak season, the pests can swarm customers’ hair and clothes, and when the COVID-19 pandemic forced vineyards to move tastings outside, the problem worsened.

Landis calls the loss of the crop and the deterrence of visitors “a double gut-punch.”

Both Waltz and Vynecrest have become research sites for Penn State, which is leading the anti-Lanternfly charge.

“I think we’ve made a lot of strides in research over the past two years,” says Leach. There’s no “silver bullet,” but they’re starting to understand Lanternfly behavior, its effect on plants, and what might reduce the numbers.

For example, Leach has learned that 65 percent of the Lanternflies in any vineyard block remain within the first 50 feet of the vineyard. This means growers can effectively target the edges with insecticide, rather than the whole site. Her team also experiments with exclusion netting (physically keeping the insects off the vines) and conducts studies that involve covering individual plants with netting, introducing different numbers of Lanternflies to each plant, and tracking exactly what happens to those plants’ photosynthetic rate, grape yield, and winter survival.

She hopes the results of these studies, which could apply to all kinds of plants and trees, will result in a “really critical system to manage this,” telling farmers what actions to take at certain thresholds of infestation.

“They’re pretty easy to kill,” she says. The real challenge is maintaining insecticide coverage that combats their constant influx. Insecticides don’t discriminate, killing off necessary bugs like bees and having other environmental effects, so there’s a cost to using them.

That’s why Leach’s team is also studying whether a naturally occurring fungus called Beauveria bassiana, an EPA-approved organic product that doesn’t harm the environment or other bugs, could curb lanternfly numbers. They’re currently studying the effect of a concentrated application of the fungus near the Blue Marsh Lake area outside Reading.

Right now, we’re in the “explosive growth” curve of an invasive species population, Leach explains, especially in Philadelphia. But we shouldn’t panic. On their own, Lanternflies aren’t likely to kill off backyard trees or plants. “Just because we have a Spotted Lanternfly population doesn’t mean we need to evacuate to Mars.”

But this doesn’t assuage the vineyard professionals’ alarm.

He and Landis also emphasize the need for more government attention to the problem. 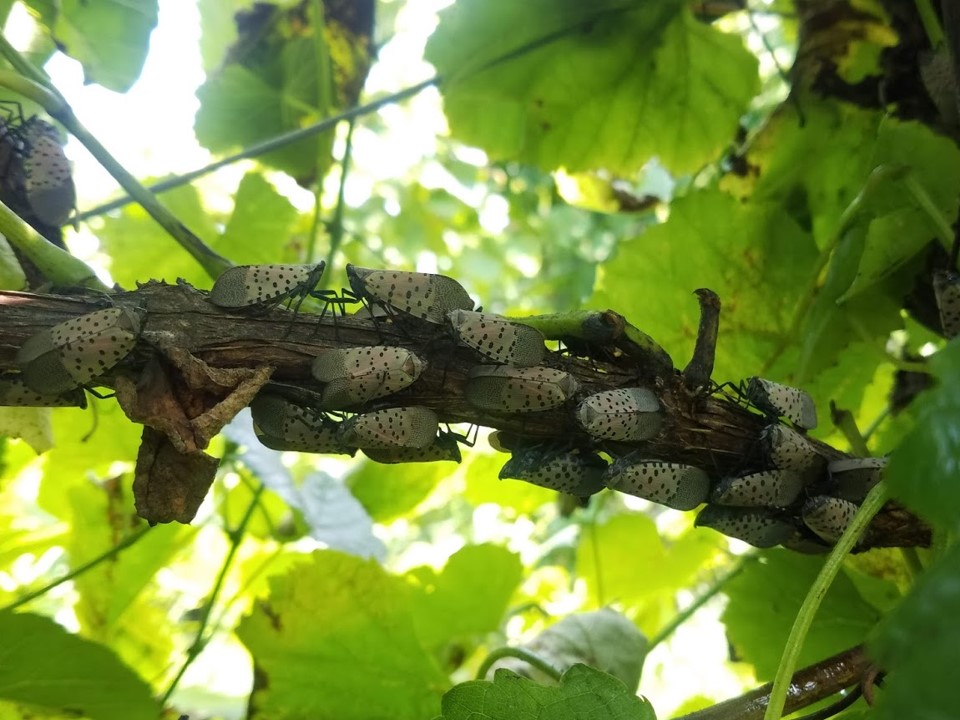 Penn State researchers have rendered valuable support, but as Landis notes, “Academia takes a longer time than private business between research and solutions.” He has sometimes felt a disconnect between researchers excited by new fieldwork and data, and the reality of his livelihood on the line. “We’ve spent the time to research, and now it’s time to work on solutions.”

Waltz speculates that the government will take more notice if the pests spread to California’s crops and wine country. Landis, meanwhile, wonders whether the problem will get more federal attention if the pests begin to hit wineries in Virginia, “closer to a little place known as Washington, D.C.”

“If you spread the money that we have across all the people that are impacted, it’s simply not enough,” adds Leach. That’s why efforts to curb the spread are prioritized, with the help of the USDA and the Pennsylvania Department of Agriculture.

“I think there’s a feeling that because this can be completely overwhelming, no one is out there to help and nothing’s happening,” she says. But “my crew works extremely hard on these issues.”

What can individual Pennsylvanians do? Look out for the Lanternflies at every stage of their life cycle, eggs to nymphs to adults, and kill them. If you’re traveling from a quarantined area by car, check thoroughly for stowaways. The PA Department of Agriculture has tips for recognizing and reporting Lanterflies (especially if you’re outside of currently quarantined counties). While they look intimidating and are prone to scary-looking hops, they don’t sting or bite.

“The first thing any citizen can do is take five or 10 minutes to read about them and find out what they’re looking for,” says Verderame. “We have an obligation to stay educated and take action.”