Q and A: Dr. Mel Schiavelli, President of Harrisburg University

On Wednesday, Harrisburg University dedicated its brand new, $73-million Academic Center in downtown Harrisburg. The ultramodern, 16-story facility has been in use since January, but Wednesday marked the official opening. A truly state-of-the-art facility, the 371,000-square-foot center boasts six science labs, 24 classrooms, wet and dry teaching labs, wireless Internet access, video-conferencing capabilities, a multi-media production facility, seminar rooms, parking and a 125-seat auditorium. We spoke with HU President Dr. Mel Schiavelli about the new center and how schools like HU can help revitalize a city and make a region competitive in the global economy.

Keystone Edge: What is the central idea behind the design and function of the new Academic Center, and what role will it play in the life of the university?

Mel Schiavelli: Well the first thing to note is that it’s the first permanent home for the new university. We’ve been living in leased and rented space for our first four years, and to have a permanent home makes a big difference, both for attracting students and for the quality of what you can do for those students. That’s the most important thing, having a permanent home, a place where people can point to and say, ‘that’s where I go to school,’ or, ‘that’s where I want to study.’ Internally, what we tried to do with the building was to make sure that it had a science and technology feel to it and that it would support new kinds of teaching and learning, which is much more project-oriented, more often done in teams, and more reflective of what actually happens when you’re out in the workplace. The design of the classrooms and laboratories was more spacious. Instead of rank upon rank of chairs and tables, we used project tables and setups where six students can work together on a project and then report and present to the entire class. 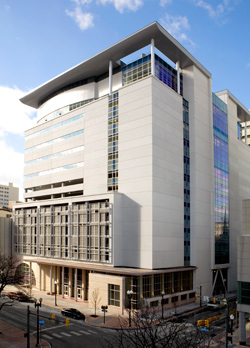 KE: So in that sense it reflects some of the organizing ideas behind Harrisburg University.

MS: Ultimately, the main idea of Harrisburg University is opening doors, and what we want to do is open doors for learners to a knowledge economy in Pennsylvania. The way we’ve done that is to open our doors to corporate communities so that they can come in help us design programs that will support them for the long term and will provide them with the kind of workforce, strategically, that they need.

KE: It seems that Harrisburg University is connected to the region and the community more so than a typical university. What’s the relationship between HU and the region?

MS: This is an idea that came out of the community. Ten years ago, there was a large group of people that got together and asked what was going to happen in this region in the 21st century, because we’re losing our manufacturing jobs and while we have reasonably good employment, we have a stagnant per capita income–which means you’re losing high-paying jobs and replacing them with low-paying jobs. And they asked what are we going to do about that? So the community came together and said you know, what we really need to do is focus K-12 education and universities on science and technology. And so out of that notion was born the idea of creating a new university focused on science and technology that would directly have an effect on the percentage of the population that holds a degree in science and technology fields.

KE: In that respect, do you see Harrisburg University as a model for the future of what higher education might look like in Pennsylvania?

MS: Well, not just in Pennsylvania. You know, the advantage we had was a blank piece of paper. Trying to change things at established universities–there are a lot of vested interests in those established universities and it’s difficult to respond quickly to changes in what people need from you. So having a blank piece of paper was a big advantage to us. I believe that we can be replicated in other communities because we’re not only an educational institution, there’s also a huge economic development component to what we’re doing here. We already have 50 to 70 students living in downtown Harrisburg. Double or triple that in the next three, four, five years and what you have is a downtown population that is going to change the city and make it a much more exciting place.

KE: And I suppose as the years go on and you graduate more students, you’ll increase the number of graduates in the region as well.

MS: Exactly. The whole idea is either to arrest or, in the best case, reverse the brain drain out of central Pennsylvania. Pennsylvania exports a lot of students, a lot of people who hold bachelors degrees, and when they do an internship or get a job somewhere else they don’t come back. And central Pennsylvania was really hard hit by that because many young people in central Pennsylvania went to Pittsburgh or Philadelphia to study, or they went out of state, and then didn’t come back here. Well, how are you going to participate in a 21st-century knowledge economy if you don’t have a population that employers want to hire? Over eighty percent of the jobs in high-growth industries in the next ten years are going to require a college education in science and technology. And so we sort of feel like we were ahead of the curve–we started talking about this six years ago and everybody said, ‘yeah, ok great.’ Well, all of the sudden the world has discovered the “STEM crisis”–the crisis in science, technology, engineering and mathematics education–that we were not producing enough people to replace the people who were retiring.

KE: So what advice would you have for prospective students?

This interview was edited and condensed for space.