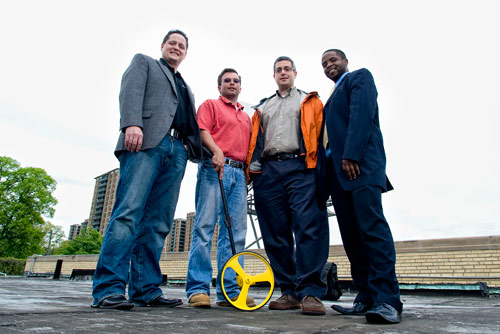 As far as alternative forms of energy go, solar panels are not new. So it’s not all that revolutionary that this summer The Enterprise Center in West Philadelphia is getting outfitted with solar panels.

But what is new, and maybe even revolutionary, is the business model at work in the project. The Enterprise Center is the first client of Solar States, a Philadelphia startup that aspires to be a new kind of power company.

The model really isn’t even that complicated: Solar States has a power purchase agreement with The Enterprise Center, which means it will fund the installation, own the solar array and sell electricity to the center at a lower rate than PECO.

“We believe the successful model is going to be one that more resembles the model people are used to now, which is to say that they pay a power company for their power,” explains Micah Gold-Markel, CEO of Solar States. 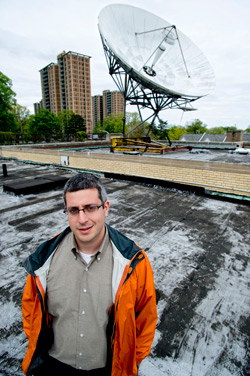 As part of the agreement, Solar States asks for a zero-dollar, 25-year lease, and in return gives a cash signing bonus and significantly reduced power rates over the long term. A Philadelphia company, Aztec Solar Power, will serve as general contractor for the project and oversee installation of the 80-kilowatt system. Gold-Markel expects the installation of the solar array, which he predicts will supply about 50 percent of the building’s electricity, to be completed by July.

The project has been waiting in the wings for some time, according to Gold-Markel. Solar States has been waiting for Gov. Ed Rendell to make good on a promise to provide incentives for alternative energy. Last month, the state came through with the announcement of the Pennsylvania Sunshine Program, part of Rendell’s $650 million Alternative Energy Funding Act.

The Sunshine Program, which kicks in this month, is funded through $30 million in state bonds and will provide rebates of $2.25 per watt, or up to 35 percent for the purchase and installation of solar electric and hot water systems. Combined with a federal incentive of 30 percent of the entire install costs, Solar States can now implement its business model.

The incentives are necessary because the cost of solar panel installation is so high. For The Enterprise Center array, Gold-Markel estimates initial install costs between $600,000 and $700,000. That’s a lot of capital, and it’s the main reason solar arrays are not more common despite being a low-maintenance, low-cost, sustainable form of energy.

“In reality, the people who own these buildings wouldn’t be doing solar now,” if not for rebates and incentives, says Gold-Markel. But with the State’s Sunshine Program and the feds helping out, “it gets some environmentally-friendly power up there and it gives them a long-term hedge against outrageous energy prices.”

That’s the other reason Solar States is betting on the future with their business model. As electricity rate caps expire throughout the Commonwealth, customers of major power companies will likely see rates increase dramatically, as they already have in some parts of the state. 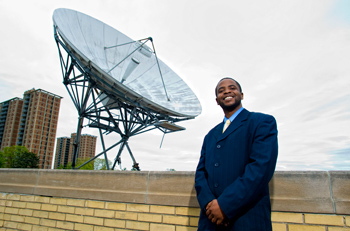 Over time, as traditional power companies increase rates, solar cell technology will continue to improve and become more efficient, which will in turn lower the cost of installation. Says Gold-Markel: “If this technology doesn’t get one hundred percent better over 25 years, there’s something wrong.”

The anticipation of rapid progress is also the reason Solar States has opted to use a power purchase agreement model rather than simply leasing the panels to a building owner. With technology changing so rapidly, a solar panel erected today, with a 25-year lifespan, will likely be technologically obsolete in about five to ten years, says Gold-Markel. Solar States has built such contingencies into its lease agreements.

“Say five to ten years out the technology becomes 50 percent more efficient and 25 percent less expensive… it makes sense for us to go up and replace the technology and put up better panels, whereas with a lease you’re stuck with whatever panels you leased originally,” Gold-Markel says. “Really what this contract is about is saying, ‘here’s a 25-year lease on your roof space, put the best technology up there that you can.'”

When the technology does improve, Solar States will be in a position to capitalize. With a lease agreement in place, all that remains is to replace the panels, which are arrayed modularly with larger cables than are necessary to make the job easier. 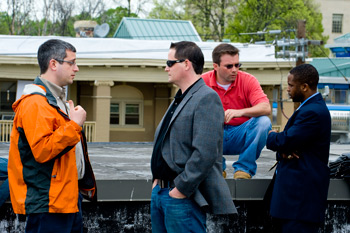 But in order to have maximum effect, solar power should coincide with other energy efficiency measures, says Gold-Markel. Toward this end, Solar States has planned a four-week course in June, “Green by Example,” designed to educate homeowners on how to save money by plugging energy leaks in their homes.

The seminar comes on the heels of Solar States’ recently concluded pilot program at the Science Leadership Academy, where high school students learned about the science and economics of solar energy. Because Solar States is also in the business of education, the company is partnering with The Enterprise Center to give students access to a working solar array and instruction from professionals in the field. In addition, an LCD monitor in the lobby of the center will display information relating to the array’s energy output.

Solar States is also planning to offer adult vocational training programs in the near future, anticipating the need for a trained workforce as the solar energy industry becomes more viable. By promoting education and training, and by building a business model that’s banking on gradually improving technology, small startups like Solar States might just be the power companies of the future.

That’s why, for Gold-Markel, the bottom line is the crucial thing right now.

“We believe very strongly that profitability is sustainability,” he says. “If we’re going to have a huge shift in the way that companies buy energy and produce energy, then we have to show a profitable business model.”