Q and A: George Jensen, CEO of USA Technologies 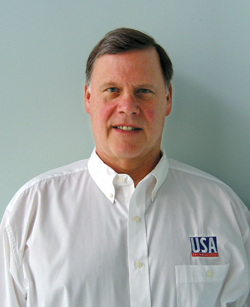 By making cash disappear, George Jensen has brought in huge profits for USA Technologies in the last few years. The Malvern-based company has the industry’s broadest installation base of unattended cashless locations, with 50,000 terminals deployed by 500 bottlers, vending and kiosk operators. It has processed 35 million credit and debit card transactions in the last two years with global brands like Coke, Starbucks and Pepsi and also leads the way in energy-saving technology–EnergyMiser–in vending machines and coolers. Last June, the company reported $16 million in revenue–$7 million more than fiscal 2007.

We spoke with Jensen, CEO and founder of USA Technologies, about his company’s remarkable growth, its leadership in the industry, and how technology is changing how consumers make purchases.

Keystone Edge: What’s new about the latest version of your ePort, the tap-and-go technology that’s installed in vending machines to accept magnetic stripe and contactless credit cards, which was released last week?

George Jensen: It was in prolonged research and development. We developed a web-enabled ePort back in 2000 and the cost was $1,900. Today, we just released our new ePort that retails for $199, a drop from $450. We worked on it for two years. It was a giant miniaturization project. We’ve been applauded for dropping our cost in a very price-sensitive market. Even in the middle of a recession, here’s a chance for customers to improve their profits through credit card purchasing power.

KE: How was USA Technologies founded?

GJ: We incorporated in 1992 and really didn’t start activity until ’94 when we came up with a concept called Golfers Oasis; it was credit card vending. Myself and a few others is all we were. I thought the vending industry desperately needed new technology and innovation. I thought a nice niche to introduce it was out on the golf course–golfers have credit cards and are thirsty. But it was a time when there were no standards in the industry and it just couldn’t be done.

A few years later we launched Business Express, which streamlined payment of the use of fax machines, PCs and other services at hotels, and that was the beginning of a long road in becoming experts in remote access technology. It crystallized a very sound business model for selling hardware for known profits. We made money on the hardware, monthly service fees, and credit card processing. That’s a business model with multiple revenue streams and it’s a predictable one. Then we had a vision to come full circle back to vending once industry standards set in.

KE: What factors led to your tremendous year-over-year growth?

GJ: Wireless is the most important. The standards weren’t there two years ago and now they are. The cost of sending wireless was prohibitive and unreliable two years ago. It has dropped to a fraction of what it used to be. That cost of communication is built into our $995 per month service fee per terminal. Modems used to go for $300 at wholesale, and now you can get them for $100. Also, a very important regulation was passed by the Federal Reserve (Regulation E) regarding electronic fund transfers in July, 2007. For transactions $15 and under, you don’t have to offer a consumer a receipt. Our customers didn’t want to buy $200 printers and stock ink and paper and worry about paper jams and all the issues that go with 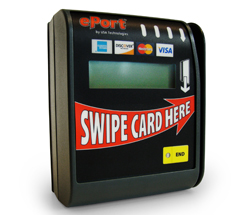 Along the way, the big break we caught was MasterCard spending $7 million to buy our product and let us give it to the marketplace. There were only 70,000 point-of-sale terminals that were there, and they bought 17,500 of our product. We’re now the number one destination for contactless credit card sales.

KE: How close are we to a cashless society?

GJ: The trend lines have accelerated. For instance, debit cards have exploded. Just last month they surpassed credit cards in term of transaction activity. Whether it be for groceries or at a vending machine, people use debit cards everywhere they can. Will cash be totally eliminated? No, but the trend is accelerating. It’s a worldwide thing, and right behind it you have mobile commerce. Being able to buy from your cell phone is going to explode, too. It’s just a matter of when the market wants to adopt that as well.

KE: How much of an impact did the introduction of your eSuds online laundry service make when it was launched in 2004?

GJ: We were on CNN, FoxNews, and in 100 newspapers. It was big news. Students can see if washers were available before they even go to the laundry room, get texts or emails saying their wash is done, and use their student ID to pay. It created a huge buzz. We got it started at Carnegie Mellon University and we’re at 59 campuses, including Temple University in Philadelphia.

KE: You’re a native of Malvern, where USA Technologies is headquartered. How has doing business in Pennsylvania impacted your success?

GJ: Being outside of Philadelphia has some unique benefits. There’s a huge talent pool and you’re so close to major cities for establishing business relationships. We’re doing something that’s never happened before. We’re out here pioneering. We’re a Pennsylvania company that’s doing something better than anyone in the world.

KE: Are you surprised by the company’s growth and how much further do you think you can take it?

GJ: The whole thing took longer than I thought and it’s radically bigger than I thought it could be. We have a legitimate chance to build a $1 billion-plus company. There will be modest growth with our employees because of the way we set everything up. We need to keep signing up new business, keeping our customers happy and follow the plan. Here we are with 50,000 connections. Who knows, maybe in my lifetime there will be a million.