Penn State Students Reach for the Stars–and the Sun 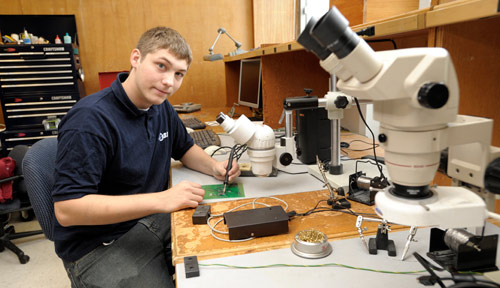 Forty years ago last month, United States astronauts left Earth’s orbit on a mission to the moon. The country was entrenched in a war on the other side of the world, trying to recover from a recession and looking for a new direction. Sound familiar?

Like many other states, Pennsylvania is looking to contribute to the country’s new direction, hoping its young minds and entrepreneurial innovators can put the U.S. back on the path toward a more prosperous future. And just like it was forty years ago, space may once again be the answer.

That is certainly what students at Penn State’s Student Space Programs Laboratory are hoping. SSPL students work on technology and space hardware for America’s top aerospace scientists. Their work has been used by Lockheed Martin, Boeing and even NASA.

“One of the great things about student programs is that they are often viewed as highly risky anyway, meaning that their experiments may or may not work,” says SSPL faculty advisor Sven Bilen. “So students are often willing to take much greater risks with hardware…We have seen a lot of interest in our technologies.” 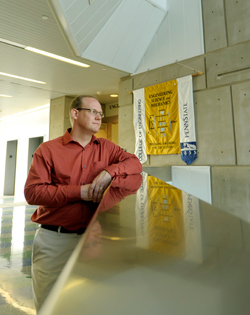 That interest is turning into student opportunities. The SSPL’s work with miniaturized, self-contained CubeSat technology has caught the attention of NASA. Originally developed by California Polytechnic State University, CubeSats are shrunken data collection satellites weighing no more than a kilogram and created from run-of-the-mill electronic parts. SSPL project manager Tony Tao was selected last summer to work with NASA on an infrared camera that would help scientists track weather patterns. The satellite is set to launch in 2015.

Working with students like Tao on CubeSat projects is SSPL student programs manager Allen Kummer. “CubeSats are a developing field right now for scientific institutions, educational institutions, and even military applications,” Kummer says. “There is a huge market for university programs, there are more CubeSat kits that are coming on the market. There are so many opportunities for small businesses from this technology.”

The reason, Kummer says, is the size of these satellites. A full-sized satellite requires a launch all its own, spending millions in resources before the satellite even reaches orbit. But CubeSats can be launched in tandem with other aircraft, shuttles, military planes or even balloons. And since CubeSats are built for simple tasks and made with inexpensive materials, it becomes more cost effective to launch several cubes as opposed to one large satellite.

But no matter how much demand there is for CubeSat technology, no one gets to NASA without going through Dr. House. No, not that Dr. House. Dr. Christopher House, director of the Pennsylvania Space Grant Consortium. 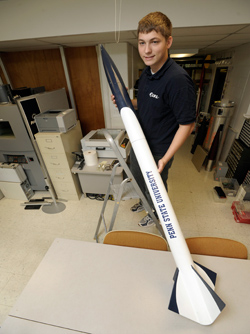 The Pennsylvania Space Grant Consortium mines the halls of academia to find qualified young scientists and connect them with the right program, corporation or internship. The money they raise and the scholarship programs they create have brought more students to NASA than any other Pennsylvania organization. Started 20 years ago by the National Space Grant Foundation, the Pennsylvania Space Grant Consortium finds funding for academic awards and serves as a bridge between the state’s top academic research and the application of that research to today’s space program.

“Penn State has been our lead institution starting 20 years ago,” says House. “They are one of the only universities to have an aerospace department, as well as other engineering fields and they have been a national leader in NASA-relevant research.”

Joining Tony Tao and a talented list of Penn State Space Fellows in the last year is Francelys Medina, a materials scientist selected to work at NASA Goddard on the state-of-the-art James Webb telescope project. Medina has researched how electrical measurements can be used to test the structural integrity of glass telescope mirrors in the harsh conditions of space. The Webb telescope is considered the natural predecessor to the Hubble, and is set to launch in 2014.

However impressive these students may be, it remains unclear what, if any, of these innovations could become technology industries for Pennsylvania. Aerospace is not a strong industry for the Keystone state, with only one major contender–Lockheed Martin’s King of Prussia facility–represented. In Pennsylvania, our major new technology industry doesn’t chase the stars and planets; it chases the sun. 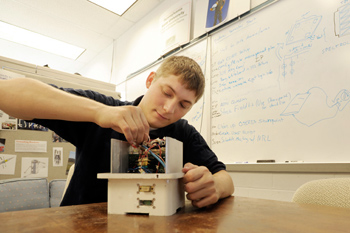 Last month, Gov. Ed Rendell announced the addition of $23 million to quadruple Pennsylvania’s solar capacity through private investment. At the close of 2007, the Department of Energy listed Pennsylvania as one of the lowest-capacity states in terms of solar energy with almost none. But with several new businesses popping up across the state and subsidies for green building projects, green jobs creation and solar energy, its an industry that could power more than just homes and businesses into the next decade.

Solar panels began as a way to reduce wiring for power systems aboard space shuttle missions. Today, NASA is still interested in solar panel technology for both their own power systems and those here on earth. Currently, the space program has the highest capacity solar energy systems in existence and is working on ways to perfect this technology.

“Satellite technology in space drives solar cell technology here on the ground,” Bilen says. “We have much higher efficiency in space, and we have to because you are so power-limited by how much space you can devote to solar. We cannot cover an entire roof with panels that are less efficient.”

The tradeoff is that the solar cells NASA uses are very expensive and are not commercially viable here on earth. But the incentive is there to develop super-efficient solar cells that consumers can afford, and according to House, interest is high: “We have seen an increase in proposals from geothermal labs, alternative energy labs, materials labs–dealing with solar panels.”

Allen Kummer of the Pennsylvania State University, at his work bench in the Electrical Engineering Building East.

Dr. Christopher House, Associate Professor of Geosciences, Pennsylvania State University, at his office in the Earth and Engineering Sciences Building.

Allen Kummer at his work station at the computer lab with a test rocket.

Allen Kummer at his work station with a payload that has flown in space.