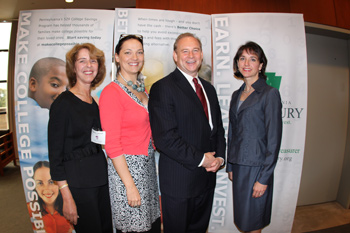 The Women and Money Project isn’t window-dressing for the PA Treasury Department. It’s a program near and dear to those involved in implementing it and has considerable credibility as a result. Most important, it’s helping Pennsylvania women position themselves for stimulus funds and other opportunities in the new economy.

State treasurer Rob McCord was raised by a single mother who worked hard to make ends meet. Dr. Eliazabeth Randol, the director of the Women and Money project, was the director of the University of Scranton women’s center before becoming a campaign manager and chief of staff for a Lackawanna County commissioner.

“We do have intellectual capital to unleash,” says Randol, who is traveling around the state speaking to women business owners and entrepreneurs. At her first stop in Scranton two weeks ago, Randol focused on pursuing stimulus funds and government procurement.

That included getting certified as Women’s Business Enterprise and placed on the federal Central Contractor Registration list. The program was built in part upon Randol’s research, which included more than 100 phone calls with women in business.

“I heard over and over how ignored these women business owners feel as far as their ability to get into the boys club, in particular as far as contracting goes,” Randol says. “They can’t get a phone call back, can’t get in the door.”

Randol is quick to point out the goal for federal procurement with women-owned businesses is 5.0 percent, and the most recent estimates put that percentage woefully short at 3.4 percent.

“For a long time, many women have thought about starting their own business, but there’s a lot of creative energy that will continue to be unleashed as people are getting laid off and have to figure out where their income is coming from,” says Randol, who will be in York on Oct. 20 and Philadelphia on Oct. 22 for the next workshops. “I think women have a good ability to identify needs in a community and come up with creative solutions.”