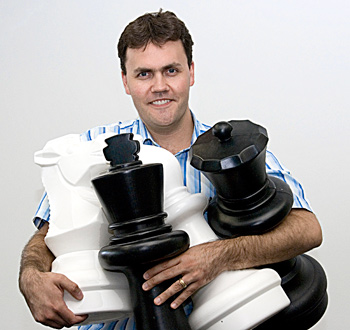 Jesse Schell’s life has followed a winding path, much like the rapid changes that have defined entertainment technology in the past 10 years. A former juggler and comedian, Schell rose to Creative Director for Disney’s Imagineering Virtual Reality Studio before ditching his Los Angeles digs with his wife for Pittsburgh, where he became an associate professor at Carnegie Mellon University, teaching game design. It was in Pittsburgh where he founded two companies, Wild Pockets (3D simulation software) and Schell Games, that have served as a foundation for a burgeoning sector in Western Pa. He also authored The Art of Game Design: A Book of Lenses, now in its third printing and used for courses at about 20 schools nationwide.

On Oct. 3-4, Schell will join Wild Pockets in hosting a 24-Hour Game Jam simultaneously at Carnegie Mellon and Harrisburg University of Science and Technology that figures to attract the best of the state’s video gaming enthusiasts and professionals.

Keystone Edge: How has entertainment technology changed in the last decade?
Jesse Schell: The big change is the industry moving away from retail. Retail really drove everything that happened in the video game industry. It controlled prices, how many units you needed to sell to be profitable. Now we’ve had this explosion of downloadable content and the power of the internet making social gaming more interesting and feasible, and those things kind of turned everything upside down. Ten years ago it was hard for a small company to get started. Now, a small company has to make choices. There are so many things you can do, like focus on iPhone games, handheld game systems, or Facebook games for example.

There are a few technologies that are coming, like the ability to understand human speech, and the implications for entertainment are phenomenal. That, I think, more than anything else will dramatically change the nature of interactive entertainment. These characters in games look pretty good and sound pretty good, but they can’t hear you. Once you can talk to them and have a meaningful conversation with a character, that’s going to be like when we went from silent films to talkies. It will move from a toy medium to a serious medium of expression.

KE: After starting two successful entertainment technology companies, do you have a secret for start-ups?
JS: One of the things we got right with both companies is having top-quality people. A lot of people say we’ve got to figure out exactly what our plan is and then we’ll figure out the right people to enact it. But the problem with that is the plan is going to change. When we started Wild Pockets it was all about creating simulation technology for firefighters. Now it’s not. It’s about simulation to share with everybody. It was because we had such good people that we were able to change direction and get to this better place. They started to see that 3D simulation can work for everybody.

KE: What have you noticed about your students, among the first generations that have “grown up” with the internet?
JS: They witnessed the world radically transform as they were growing up. They saw cell phones take off. They can see how different their life is now from when they were kids. It kind of makes them think that anything is possible because the whole world is upside down. They see that kind of change as normal, because that’s all they’ve ever known. They’re also very passionate about using stuff to making something useful, making something to help people. They see all the shortcomings of new technologies and want to find ways to make them better and make the world better, which is very inspiring to me.

KE: Do you feel Pennsylvania can become a player nationally in entertainment technology?
JS: I think Pittsburgh’s incredibly well-positioned. I came here a little over seven years ago and there were two companies making games in Pittsburgh with a total of eight people working on them. Now there are over 10 companies in Pittsburgh with 150 people making games full-time and that’s continuing to grow. The reason? Talent is all you need to make these games, and Pittsburgh attracts the right kind of talent between Carnegie Mellon, University of Pittsburgh and The Art Institute. Geography doesn’t matter with this industry. If you can be in a place with a lower cost of living than the national average, that’s good news. For that reason, Austin, Texas is one of the top cities, and I think Pittsburgh has a real opportunity to grow this way.

KE: What can the uninitiated expect at a Game Jam?
JS: The idea is to get a bunch of people interested in making games, and in a short period, usually 48 hours, they’re going to design, implement and test complete games. It’s very exciting and there’s a huge amount of energy to build things that are fun and crazy. It’s fun to build them in such a short time because there’s no time to second guess. You just have to grab and go. Also, Wild Pockets is going to premiere some new features. Wild Pockets is ideally suited for this kind of rapid development–its software service is designed to make things quickly and shareable.

Some people will come as part of a team or solo, and usually teams will have a mix of tech and artistic people. It’s fun for hobbyists because they get all this intense exposure working shoulder to shoulder with people who do this for a living, and for professionals it’s a really nice break to work on something for two days considering they work on some video games for a year or two before it goes out the door.