Do you know why cell phones work? Probably didn’t care either, which makes sense. People want things that simplify tasks without having to know how or why they work. It’s intrinsically what separates good products from bad ones.

But just because you don’t know exactly how you’re able to read this or why some fats are beneficial when others aren’t shouldn’t mean you stop wondering about all of the world’s why’s?.

Darlene Cavalier has hope for you.

Though she didn’t create the idea, she’s accepted her identity as the “Science Cheerleader” and taken to it, leading the crusade to bring science back to the masses and make analytical thought as routine as starting the car in the morning.

“There aren’t a lot of opportunities for people to weigh in on things, not at a federal level,” says Cavalier, who’s an advisor for business development at Discover magazine. “I felt like I had more to contribute to conversations, but I didn’t know what it was.”

So, in April, 2008, the Philadelphia resident started a website–the idea for the title came from another parent at her children’s school who has a marketing background. He became interested in her desire to democratize science and quizzed her about herself to help develop a niche. When he stumbled across her somewhat-hidden past life as a cheerleader, he knew he’d found it. 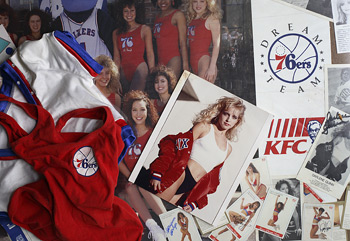 “I kept it a secret. They’re two totally different worlds,” says the one-time pom-pon shaker for both Temple University and the Philadelaphia 76ers basketball team. “I was already dealing with stereotypes because I looked a little different than some other people who worked at Discover.”

Read: Hot vs. not so much. But almost more important was the vague stigma she feared her cheering past would create, as if she had been too frivolous then to be taken seriously now. “I know for myself, I really, really wanted to prove myself professionally,” she says.

But then add a few drinks at an office party and a chance run-in with an old teammate, and Cavalier was outed, showing off lifts and dance routines she had locked away years ago. Luckily, the office brass didn’t flinch. “They thought it was cool because I had already proved myself at Discover,” she says.

Proving she belonged was important to Cavalier because her bona fides were somewhat suspect. Her collegiate years probably appeared to be spent studying “mixology” and cheerleading, she admits, and aside from a temporary job stuffing envelopes, her first paying gig after school was on the 76ers dance team, from the 1991-92 through the 1993-94 seasons.

While traveling with the team and dancing for thousands of fans every night was fun, Cavalier knew it was a short-term assignment. As it turned out, it was the temp position that landed her not only permanent work, but her calling. She was stuffing envelopes for scientists applying for awards from Discover, which forced Cavalier to interact with them. Invariably, their conversations gravitated toward explanations of the scientists’ work, and Cavalier became convinced that other regular people could be interested in this science-y stuff if they had the same level of interaction.

Fast forward: Cavalier is hired full-time by Discover when it’s purchased by the Walt Disney Co. and she goes to graduate school at the University of Pennsylvania to study public interaction with science. One of her main research topics is why the federal Office of Technology Assessment failed miserably–so miserably, in fact, that most people didn’t even know it existed before it was defunded by Congress in 1995. 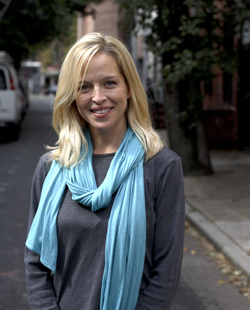 By the time she graduates in 2005, she has her answer: “Part of studying the OTA was studying the criticisms,” she says. “Part of the reason people feel it was shot down is it had no public support. I was hoping somebody was pushing for a 21st-century OTA.”

When she found no one, she became that somebody. While her Web site began as a forum to discuss science issues and raise interest among her friends, it quickly morphed into a convention-breaking beast with three goals: increase adult science literacy, enhance citizen involvement in research and reopen a public-friendly OTA.

To increase literacy, Cavalier approached George Mason University physics professor (and author of various books on adult science education) James Trefil, who helped design a “brain makeover”–18 important science principles, whose descriptions are made easier to digest with a little help from the current 76ers dance team, followed by a 26-question test on what’s really important in the world.

The ladies don’t say much. Sample line: “No. 6, Atoms are bound by electron glue,” says blonde Melanie in a subtle but spot-on Philadelphia drawl–but the eye candy is just the spoonful of sugar.

“If we want to move the needle on these issues, we need to be real and realize what motivates people,” Cavalier says.

Does that have to mean selling sex, an idea implicit in using beautiful cheerleaders? “I’m happy to get the lowest common denominator, but I don’t aim for them,” she says.

Rest assured, Cavalier is aware of the incongruity between cheerleading and scientific endeavors–her 11-year-old daughter already “automatically thinks: science equals geek.” The stereotype clash of all-bimbo-no-brain vs. all-science-no-fun is one she plays with on the site. “With Science Cheerleader, it’s like making fun of myself–that Legally Blonde” idea, she says.

But make no mistake; she didn’t start out so self aware. Her early life was firmly entrenched in the carefree, mentally unencumbered world of cheer and all it entails. “I never knew what an engineer was until I went to college,” she says. “I thought it was a train conductor.”

So she pulls from that to engage her audience. They probably got turned off in high school, she reasons, perhaps because they were bored, or maybe just interested but terrified. Either way, her goal is to rekindle that flame.

“I’m saying it is not too late; why do I have to wait for my kids to change the world if I could be weighing in right now if I had access to the right information,” she says. “There are a lot of me out there, I think.”

Must be. The videos have received at least 10,000 views, and she’s making inroads with the Philadelphia Eagles, getting former defensive standout Hugh Douglas to star in a few videos.

The site also boasts a search engine of real science research projects in which regular people can participate, as well as Cavalier’s research into townhall-style science forums in Denmark that she believes could be the model for the improved OTA.

There is criticism, she acknowledges: “mostly feminists,” but also scientists. “To be honest with you, I think there’s jealously. I think they missed the bigger point,” she says. “There is an element of territorialism: ‘Let us have this.’ … The point isn’t to take away.” But she admits that it could simply be her perspective: “Maybe if I were on the other side, I would agree.”

Still, she doesn’t regret being a lightning rod for the changing culture of science.

“You can break these two stereotypes; you can blend these two worlds,” she says. “This is just a personal endeavor, and I think that makes it more legit and trustworthy for people because I’m not getting anything out of this. I don’t think I could have been doing what I’m doing now without everything leading up to it.”

Photographs from her earlier days with the Philadelphia 76ers