Recycled Skateboards Jump From Passion to Profits for Hanover Entrepreneur 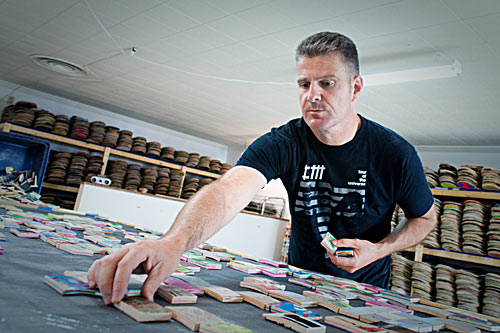 Rich Moorhead is building a business the same way he puts together his product: Some pieces come together by design, others he finds by chance.

For the last seven years, Moorhead has been cutting up broken skateboard decks, sanding the edges and rearranging the pieces in bold, colorful designs that grace walls, tables and mirror frames. The undersides of skateboard decks typically feature graphics ranging from the abstract to the cartoonish. 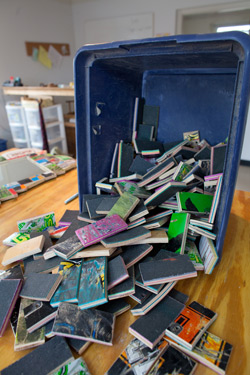 “I kind of stumbled into this, and it quickly became a passion,” says Moorhead, 45, whose workshop is tucked inside the industrial alleyways of Hanover, a small town roughly halfway between York and Gettysburg, just north of the Mason-Dixon line.

Moorhead started small, but this year he is beginning to ramp up production at the one-man company he calls Art of Board. His plans include adding space and an employee or two. He also is expanding the reach of a program he launched to collect broken boards from skate shops. The program is called “I Ride. I Recycle.”

Participating shops include Nocturnal in south Philadelphia. Moorhead has been collecting decks from Nocturnal for the last several years, says the shop’s owner, Mark Brandstetter. “It’s just firewood basically, and he’s turning it into amazing works of art.”

In return for the boards, Moorhead made a mirror frame for Nocturnal and offered to create a wall design for its new shop at 620 S. 4th St., Brandstetter says. “That just blew me away. That would be so awesome.”

Moorhead also is working with a nationally known glass-tile designer, Erin Adams, to sell his designs nationwide. She has helped him hone his production techniques and find a market. “I think that there’s huge potential in what he’s trying to do, and doing,” says Adams, founder and chief executive officer of Erin Adams Design in Albuquerque, N.M.

Adams says she is particularly impressed by the sustainable nature of Moorhead’s work, which involves reusing something that usually ends up in the trash. But it’s the end results that won her over. “I really love the colors, the patterns, the abstraction that you get,” Adams says. 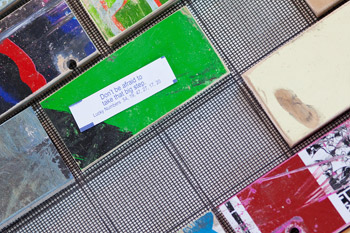 Moorhead initially wanted to open a skate shop in Hanover. But given the negative image of “skater kids,” he says, he had trouble finding space. Then, he noticed his teenaged nephew had been letting broken decks accumulate. Moorhead took the wood, cut it up and started experimenting with designs made from the pieces.

“You can capture quite a bit in some of the artwork left on a broken deck,” says Moorhead, a Pittsburgh native who has lived in Hanover for more than a decade.

Although Moorhead already had a day job in commercial sales, he kept tinkering. The process combines his love of skateboarding and its visuals, his interest in working with his hands, and the admonitions he heard as a child.

“I grew up in a household that didn’t like waste,” Moorhead says. Stints in construction and carpentry reinforced his preference for conservation. Wasted wood at job sites bothered him. “That just kind of stayed with me,” he says

Moorhead’s first pieces included framed mirrors that he sold at Hanover’s Pennsylvania Dutch festival. When he sold out, he knew was onto something. “That was a good sign,” he says. 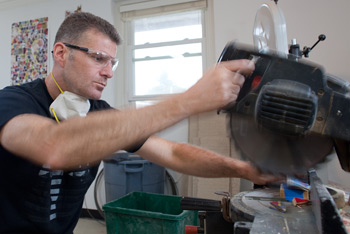 Squaring up for growth

Working nights and weekends, Moorhead started incorporating the designs into larger pieces, including tables. He also refined his approach and his equipment. He started out cutting pieces of all shapes and sizes using a thin scroll saw and sanding them by hand. He now uses a more powerful band saw to cut only squares and rectangles, while an electric belt sander smoothes the edges. Squares and rectangles maximize the amount of wood he can salvage, Moorhead says. And they dovetail with where he sees his market heading: walls and other flat surfaces.

“I realized that it was more than a concept,” Moorhead says. “This could work.”

Today, the designs take shape on a 4-by-8 sheet of plywood, where Moorhead arranges the pieces by hand. Bins below the table hold pieces sorted by color and look. The finished products, done on a custom basis, are mixtures of chance and purpose.

An example is the kitchen backsplash Moorhead created for the Lofts at Cherokee Studios, an apartment building on the site of a former recording studio in Los Angeles that is aiming for LEED-platinum certification. After learning that Elvis Presley had recorded in the studio, Moorhead found a skateboard deck bearing Presley’s image. The design also incorporated a tile with the name Bob, in honor of Moorhead’s late father. 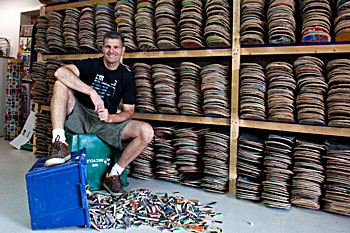 Interior designers envisioned a range of uses for Moorhead’s designs, from decorating children’s rooms to making kitchen countertops. Commercially, the tiles could be used in restaurants, bars or retail stores, designers say.

“This product really excites me because there’s only one component, which is the skateboards, and that’s 100 percent post-consumer, so there isn’t any sort of green-washing happening here,” says Sarah Barnard, principal designer for Sarah Barnard Design in Los Angeles. “I think it’s a really neat product, very timely.”

The story behind the product will only help, says Claire E. Tamburro, principal of Tamburro Interiors in Arlington, Va. “There’s a curiosity factor about it,” Tamburro says, “where people will see that up in a restaurant and say, ‘Oh, I wonder how they made that.'”