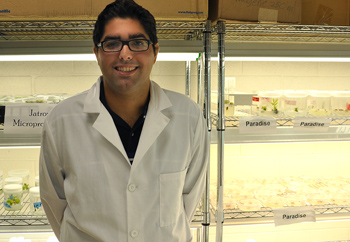 For Ben Tabatabai, inspiration came first on a family trip to Yosemite National Park in California. It came next from a Penn State professor who preached about “peak oil”–the notion that oil supplies are destined to dry up soon. The weeklong trip persuaded Tabatabai to study ecology. The idea of peak oil narrowed his focus to the field of alternative energy.

Today, Tabatabai toils inside a bustling laboratory on the campus of Penn State-Harrisburg. He is helping to create plant-based sources of fuel that someday could be cultivated in Pennsylvania. “It’s a really growing field, and I want to be a part of it,” says Tabatabai, 24, a native of Hershey who is pursuing a master’s degree in environmental pollution control.

Tabatabai’s research centers on a tropical plant, called jatropha, that can be converted into biodiesel. The challenge lies in engineering the plant to thrive and reproduce in temperate climates far from its tropical home, Tabatabai says. He and his colleagues have been modifying the plant’s genetic structure and figuring out the best conditions for its growth. “It’s almost like you’re communicating with the plant to reason why something works in one plant but not another,” Tabatabai says. “They are very complex living organisms.” 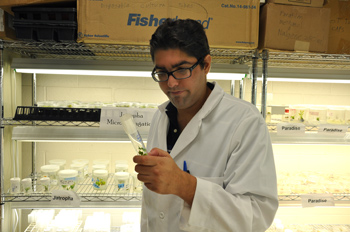 COMPLEX STRUCTURES, SIMPLE PLEASURES
Tabatabai spends a lot of his time observing nature through a microscope. But he also enjoys the view from a distance. If not for his pursuit of science, he says, he might have become a park ranger. His favorite spot is the forest. “If you’re really stressed out, that’s one of the best places you can go,” he says.

The most serene woods he has experienced, he says, were in Yosemite, which he visited  before his senior year of high school. It was his first and only trip to the park, and he credits it with inspiring him to translate his love of the outdoors into the study of ecology at Penn State. In State College, he took a class in field ecology led by a professor who talked about peak oil, as well as the environmental and political effects of oil consumption in the United States. Many political problems can be traced back to the fact that much of this country’s oil is imported, Tabatabai says.

“It really struck me, right then and there, that something needed to be done,” says Tabatabai, who graduated from Penn State with a bachelor’s degree in biology and a concentration in ecology.

BACK AT THE LAB
Tabatabai considered a range of options after college, including business and public policy. He decided to continue with science. Penn State Harrisburg, near his childhood  home in Hershey, wasn’t his first choice when it came to a location, Tabatabai acknowledges. His father teaches at the college. But the opportunity to quickly begin work in the school’s alternative-fuels lab appealed to him, he says, adding that other schools would have required more class-work first.

The lab itself is headed by Sairam Rudrabhatla, a biology professor in the school’s department of environmental engineering. Under his leadership, researchers are examining a host of plants for their potential in making biodiesel and ethanol, seen as cleaner, sustainable alternatives to fossil fuels. Their focus is plants that won’t compete as sources of food and that can be grown on marginal lands, such as abandoned minefields. In addition to jatropha, researchers are examining camelina, miscanthus, sorghum and switchgrass.

“The idea isn’t that one crop will solve the problem,” Tabatabai says. Instead, each crop may end up contributing, along with power sources like wind and solar, to reducing demand for imported oil and curbing pollution from carbon.

DESTINATION UNKNOWN
Work at the lab is expected to expand with the construction of a new greenhouse and research center. In May, the Commonwealth Financing Authority awarded Penn State Harrisburg a grant of $817,000 toward a proposed $1.6 million Central Pennsylvania Laboratory for Biofuels. When completed, the facility will house a  biotechnology laboratory and a greenhouse.

As Tabatabai embarks on his second year of graduate school this fall, he is contemplating his next move. He might continue beyond a master’s degree and earn a doctorate. He also is weighing options in government or business, perhaps even as an entrepreneur. “There’s a great deal of work in the private sector in plant biotechnology,” Tabatabai says.

Tabatabai also would like to see more of the world. He’s never been to Europe and might go after he wraps up his thesis. In addition, he would like to explore the American South and Southwest. But before he loses himself in another forest, he anticipates the day he can look back and say his research led to a new, domestic source of energy. “Making a little bit of money would be nice, too,” he adds with a smile.