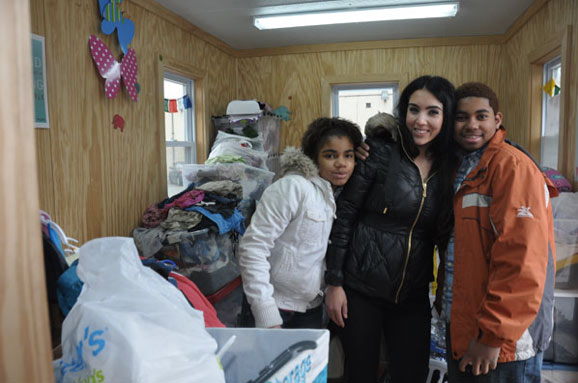 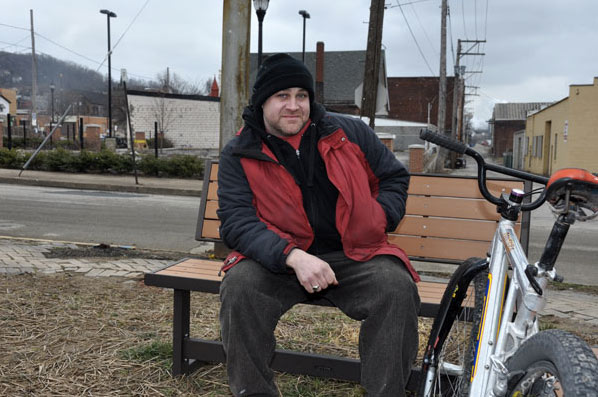 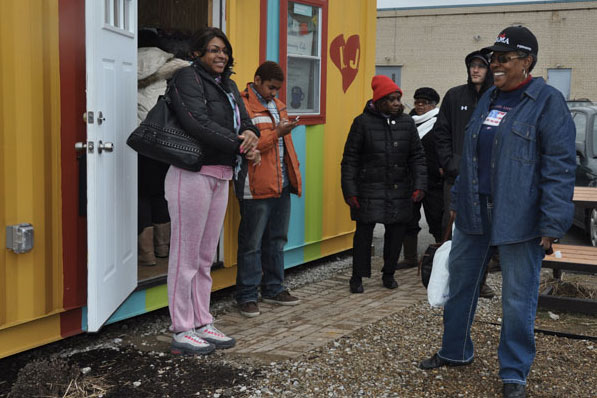 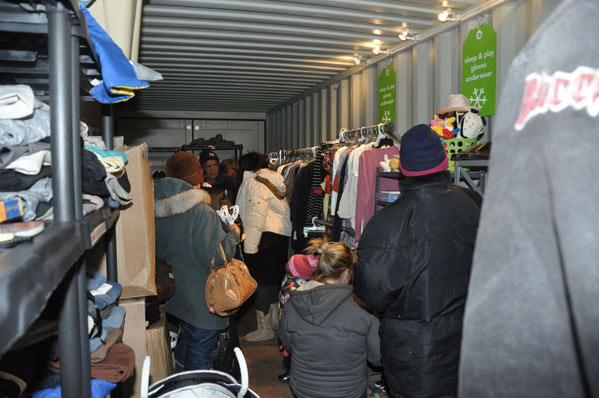 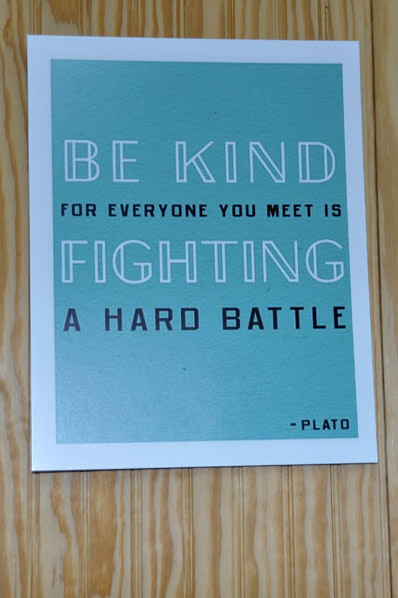 It's blustery and bleak in Braddock with a light snow falling in windy swirls and not even a hint of sun. But people are lined up patiently and cheerfully outside The Free Store, a shipping container brightly painted in bold stripes on the exterior and inside, stuffed with gently used clothes of all kinds. It's all free to whoever needs it.

The founder of The Free Store, who's never worked in retail but on this day looks like she was born into it, is Gisele Baretto Fetterman, wife of the renowned Braddock mayor, John Fetterman.

While he gets most of the attention in the economically depressed Braddock, she's a force in her own right –a slender and loquacious 31 year-old beauty from Brazil, who radiates warmth on this chilly day. She seems to know everyone there.

She knows the grandmas who are raising kids and what they need and she knows that Amber, who is coming by, is pregnant with a boy and so she has a stack of baby clothes neatly set aside for her.

She also knows that on average The Free Store has 50 to 70 people in an hour come through its single and narrow door, a number that would delight most retail stores. But then most days it's only in operation for an hour and today, they seem to be there all at once.

Opened in October, 2012, The Free Store gets ample clothing donations from individuals but it's the partnerships with companies, many through an organization called KIDS – Kids in Distressed Situations, out of New York–that energize Gisele.

“We got 400 velour jumpsuits from Juicy Couture because the tag was inside out,” she says proudly. And then there were the 250 Hello Kitty blankets she snagged simply because, “they failed to sew a nose on them and they would have gone to waste!” Not to mention the  recent 7 for Mankind shipment. “Look,” she says, holding up a chic and tiny pair of gray pants.

Now she's working locally with Costco, getting their produce twice a week.

The shoppers, mostly women with a few men, politely jostle their way through the long and narrow and dimly lit container as they browse through double-tiered racks of clothes, many yelling a friendly greeting or stopping to hug her.

“She's the best thing to happen to Braddock,” says  Dorothy Guy, grandmother of Jonathan, 14, who is helping out this day. “She's so kind and everyone loves her.”

In response Gisele makes a disparaging noise that sounds a bit like a duck quacking—wah wah –as if to squash the remark. Dorothy goes on anyway and Giselle squawks softly again, pivoting sharply in her high heeled boots to direct attention to a pile of clothes in the front of the container.

She tells a story  of a little boy who saw a pile of Carter fleece pajamas and said, 'I've always wanted one of these!'

“I cry three times a day here,” she says as she touches her hand to her heart.

While the store is open to “the community,” Giselle says, “I would never ID anyone or turn anyone away. We've become the first stop for several Allegheny County social workers who have families in need but the bulk of our customers are from Braddock, North braddock and Rankin.”

While most of the goods at The Free Store are clothing –due to space restrictions it's challenging to store furniture or larger items–they manage to bring in other things.  “We're offering formula by request,” Gisele adds. A lot of women are altering formula to make it last, a bad idea. “I'm super pro breastfeeding,” she says.

Today she is eagerly awaiting the arrival of 25 desks from Construction Junction in partnership with a university.

When will they be here?” asks one woman who stands in the cold. “I have a dentist appointment at 2:00.”

“They said 1:15 so it should be any time now,” Giselle assures her. The woman exhales in relief.

It is easy to imagine Gisele elsewhere:  on a runway, for instance, with her model looks and figure or at a swank party, drink in hand, bobbing to the music. But in this setting all cylinders seem to be firing and she is clearly the center of attention as she is summoned nonstop for help.

“Do you have hangers?” asks a woman inside the container. “I have so many hangers!” Giselle says with a bright laugh and then points the way.

When the conversation turns to her husband and how unexpectedly funny he was during a TEDxGrandview Ave presentation in Pittsburgh, she nods. “He's very self-deprecating,” she says.

Giselle has been married to John Fetterman for 5 years, having met him after reading about Braddock in a national news story while she was at a yoga retreat and living in New Jersey.

“Braddock felt so sad,” she says. “So I wrote a letter to the bureau and offered to start a summer program for kids. John called and invited me to meet with him — and it was love!” she says laughing. “Isn't that romantic?”

On sight, they are an oddly incongruous pair. He's hulking and intimidating with his Braddock zip code tattoo emblazoned on his forearms and his don't-mess-with-me demeanor; she's slight, elegant and more approachable, with a quick smile and with her heart on her sleeve.

A holistic nutritionist and a graduate of Columbia University, Gisele is now the mother of two children with John, a four year old son and an 18 month old daughter. They also have a rescue dog from Hello Bully named Kale, after the vegetable.

“The four year old will now say, 'I don't wear that anymore. Take it to the Free Store,'” says Giselle, smiling.

At home they have two containers like this one, she says of the Free Store structure, which they got from a company in Swissvale. The container is both store and storage: in the front, donated clothes are piled waist high in plastic and cloth bags.

Soon they'll get an addition. “We're getting a drop off box!” she says.

While The Free Store is only open limited hours, Giselle has done pop up store events since opening last year to spread the word and the merchandise.

And while at first this might seem an unlikely setting for her, her background proves otherwise.

She moved from the beautiful but dangerous part of Rio de Janeiro to New York with her mom (now a N. Braddock resident), grandmother and brother, Del.  “The violence was just too much,” she says. “My mother wanted us to have opportunities beyond what Brazil was able to offer back in the early 90s when we emigrated.”

In New York, the 9-year old Giselle would explore on bulk garbage days, finding  items such as furniture in perfect condition. “I would always try to find a new home for things,” she says. “Our entire first apartment was furnished with roadside finds–“bulk garbage day” as they called it in New York.  I couldn't believe they would completely crush everything in the garbage trucks.  It made me sad for all the energy and materials that were put into making each piece of furniture, and how someone new could save it and love it and give it a home.

And for her wedding with John, she wore a gown that she bought in a thrift shop for $13.

Gisele is excited about finding a home for another project, this one with Free Ride of Pittsburgh to start a Braddock Red Lantern Bike Shop in a container next to The Free Shop.

“Brian is here!” she says, eager to make the connection as she calls to Brian Sink, the founder who awaits outside, and makes the introduction.

He explains that the bike shop will be similar to Free Ride Pittsburgh where they will  fix bikes for kids and others in a DIY effort and will have used and recycled bikes available to buy for only $5 or $10 dollars. “You volunteer to pay them off, ” he says.  Everyone gets the same volunteer rate of $8, whether it's a six-year old child or me, he explains.

Within two months, says Giselle, the container will be in place and the Red Lantern Bike Shop will open.

It's not the only change coming to Braddock St.  Another project she's undertaking is something she calls Positively Parking to counter all the negative parking messaging on the main street. Soon she hopes to have signs up and down Braddock St. proclaiming everything from “NOTICE: EAT MORE VEGETABLES to  NOTICE: LOVE ONE ANOTHER.

Inspirational signs dot the landscape of the Free Sign, including this one upon entering: Be kind for everyone you meet is fighting a hard battle.

In a happy ending, the desks arrived  as scheduled and so did 100 veggie platters from Costco on the next day.  Gisele posted on Facebook – first trip is to the senior citizens center to drop off veggies and then the rest would be at the Free Store. Also, 10 desks are available outside the store to anyone in need!

“Braddock,” she says, gesturing with arms wide to encompass the all of it, “is a 24 hour gig.”  She has taken it on along with her husband.  And somehow you can't imagine her anywhere else.