By Jake Blumgart on September 11, 2014
Baldwin’s Book Barn has an idyllic setting 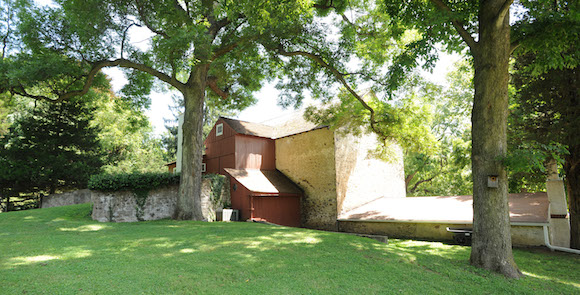 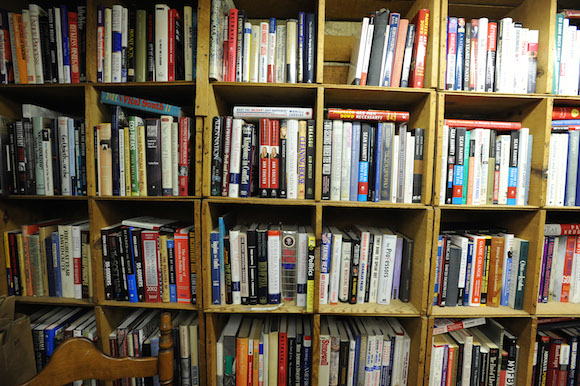 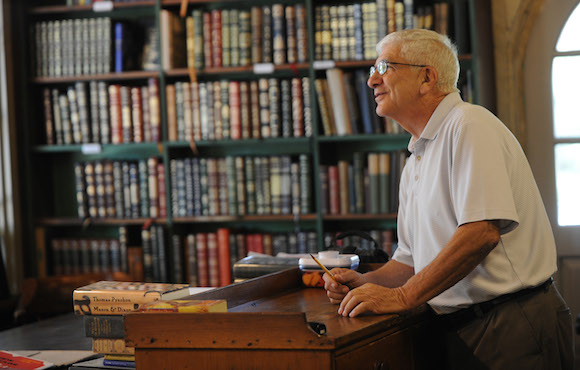 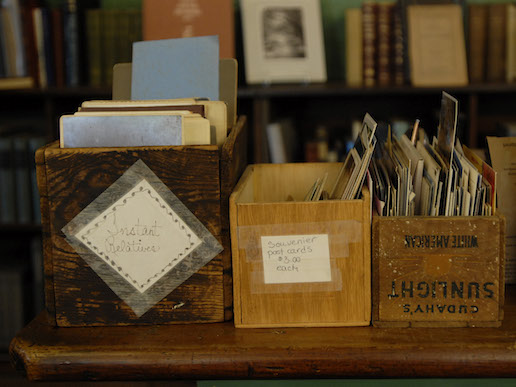 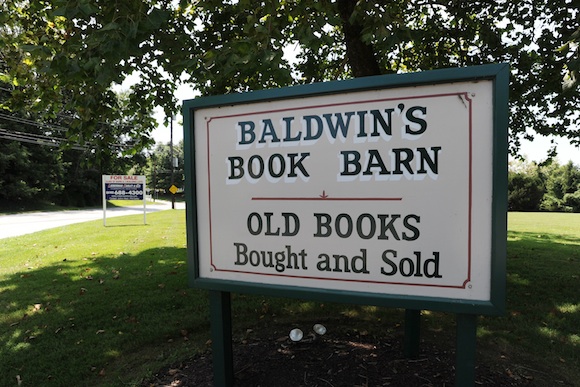 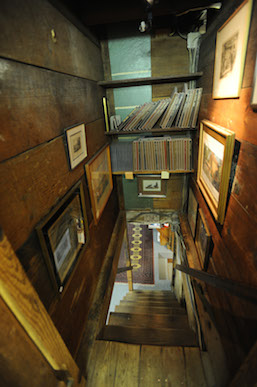 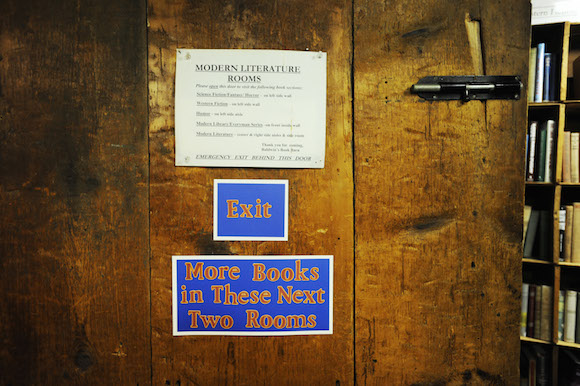 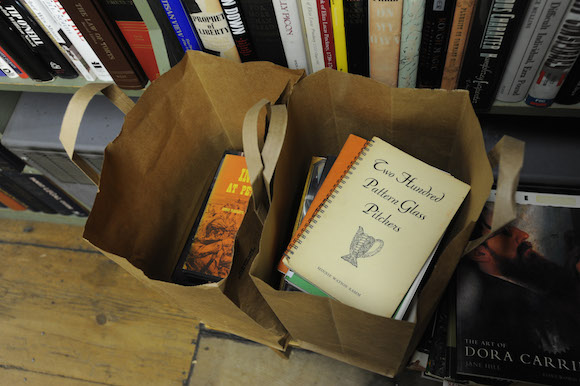 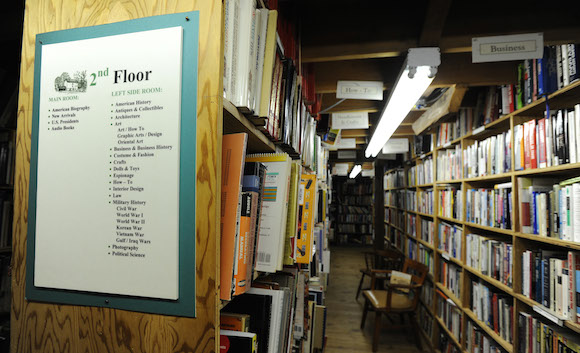 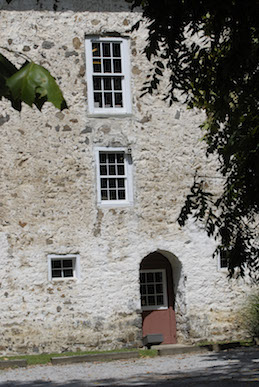 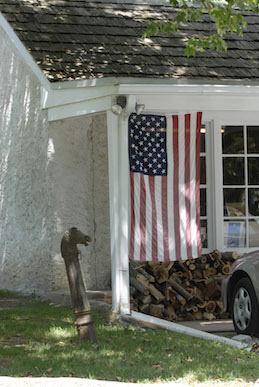 America's largest used bookstore is closer than you think. Deep in the neatly-manicured countryside of Chester County, down one of that district's winding roads, sits Baldwin's Book Barn. The building was constructed in 1822 as a dairy barn, but over the last seven decades it become home to hundreds of thousands of volumes.

The Book Barn's stately bulk fits in nicely with this most genteel of Philadelphia's suburban counties (Chester is the wealthiest in the state). It is unusually tidy for a used bookstore and studded with classic paintings, notably those of Andrew Wyeth, who was a friend of the store and its owner Thomas Baldwin. The downstairs is stocked with books about Chester and Delaware counties, and also features rooms devoted to military history, of which there is a steady supply from the libraries of deceased amateur historians.

According to one store employee, Carol Rauch, the Book Barn is the largest used bookstore in America — Portland's Powell's and New York's Strand both sell used and new books.

The book mecca is five-stories tall and crammed full of overflowing stacks and shelves. There is a picnic area outdoors, an apartment annex where Baldwin lives with his wife, Kathleen, and several rooms for rare books. A couple cats loll around the shop, snoozing on bookshelves and terraces. Baldwin's Jack Russell terrier, Bird, trails him around tirelessly and gratefully accepts backrubs from the adoring masses. There is also rumored to be an apparition haunting the upper stories. Baldwin has never seen it (“I'm not a ghost guy”), but numerous children have reported the shadowy man reading in one of the barn's many comfortable chairs.

There are maps available at the entrance for those not content to wander blind into the recesses of the building. The upper stories contain every category imaginable, including a few tall shelves for the Westerns that Baldwin enjoyed in his youth. A section on Philadelphia disgorged a 1982 oral history of Kensington, Vanishing Mills, Vanishing Neighborhoods, and a biography of former mayor Frank Rizzo, The Cop Who Would Be King.

Business has dropped off since their online book trade plummeted in the early 2000s (as amateurs began flooding the market), but the store is still turning a profit. Even on a rainy Saturday, costumers trickle in at a steady rate for a relatively isolated locale. (The Book Barn is about a mile south of West Chester.) The store's revenue peaked, in Baldwin's recollection, at $1 million a year.

“You couldn't get in the parking lot on the weekends, it was incredible,” he recalls, noting that their continued good fortune is something of an anomaly.  Baldwin estimates that 80 percent of brick-and-mortar bookstores have gone out of business. “The people who are left, it's not a profit thing, it's a lifestyle.”

Baldwin's father owned bookstores in West Chester and Wilmington, Delaware –stronghold of the powerful Dupont family — before opening the Book Barn in 1946. Local banks at the time refused to lend him the necessary $12,500 — almost $153,000 in today's dollars — because they considered the barn too deep in the countryside to become a successful retail business. Fortunately, Baldwin Sr. had befriended Henry Dupont in Wilmington and the industrialist cut him a check for the entire amount.

The family moved from their rowhouse in West Chester to live in the very apartment annex where Baldwin and his wife reside today. The younger Baldwin remembers walking across the fields to a one-room schoolhouse and learning to drive at the age of eight. He would go on illicit night drives — waiting until his father fell asleep to push the car far enough from the house that the engine wouldn't wake the adults. That youthful bravado became a defining characteristic: He dropped out of high school to join the Marines. Later (having eventually finished school), he decided to purchase a rundown inn — “a shot and a beer place” — at the age of 24. His quickly turned the Marshalton Inn into a watering hole that attracted the elites of Chester County.

After that first successful business venture, Baldwin continued in the hotel and restaurant business, even doing a stint managing Maryland's famous Tidewater Inn for the Duponts. He also dabbled in a few high-risk enterprises and raced cars, including a turn at Daytona.

“It's the greatest experience you could have,” recalls Baldwin. “In the straights you are going 200 miles an hour. That's the easy part. The difficulty is the curves, when you have to break.”

In 1983, he returned to the Book Barn full-time to help his ailing father. Though Baldwin has always been easily bored by success, he hasn't tired of bringing his business acumen to bear at the family store. He's been toying with selling the property for years — much of his family now lives in southern Florida — but he has rejected two buyers.

“I'm very fussy on who buys it,” says Baldwin. “I want it to go on as it is. There's nothing like it in the world. It's a very important landmark for the community and the state of Pennsylvania. I'm not anxious to sell it. I love it here. But it may be time. I do want to be with my family and grandchildren.”

Baldwin, the last vestige of a family that has lived in Chester County since the Colonial period, already splits his time between the Book Barn and Florida. (He is related to John Morton, one of the signatories of the Declaration of Independence.) But as he sits in his back office — cheerfully dispensing advice on fraternizing with the wealthy, and recalling rare books worth hundreds of thousands — he doesn't seem in a hurry to depart.