Rebirth on the Monongahela River

Enjoying green space — and cornhole — on the Mon

For those who love the mighty Monongahela River — affectionately known as “The Mon” — it being named “Pennsylvania River of the Year” in 2013 was just the beginning. The 130-mile-long waterway, the historic small towns along its banks and the Mon River Valley as a whole are fast becoming a hub for recreation and tourism.

Once a bustling commercial passage, The Mon is coming back to life. Along with the occasional coal barge, a visitor to the water’s edge is likely to see canoes, paddle rafts, kayaks and fishing boats as more people discover the fun to be had on this beautiful waterway. 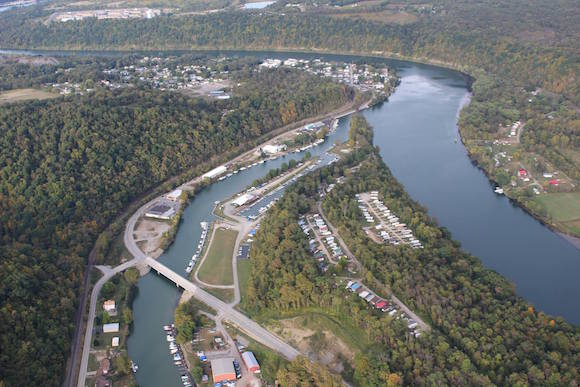 And along the banks of the river, from the town of Monongahela all the way south into West Virginia, sit towns rich with historic significance — some buildings even date back to the Revolutionary War. In the second half of the 20th century, as the industries that helped build these towns faltered, jobs and populations were lost, leaving only the history behind. Those towns became places to drive by, not destinations to drive to. Now that is changing as these charming hamlets cultivate economies linked to the region’s growing sustainable tourism industry.

That burgeoning outdoor recreation sector — comprised of paddlers, fisherman, hikers and bikers — draws on the unique natural assets of the region. Each community on the banks of The Mon is unique, but they all share a historical connection to the water that runs through them, and they’ve decided to band together.

“Everybody gets it,” explains Elizabeth Menhart, tourism director of the Greene County Tourist Promotion Agency. “They all see the value in collaboration to market the region. It is opening doors to what is possible.”

Towns throughout Washington, Greene and Fayette Counties are all working towards revitalization.

“The towns are seeing more interest in access to the river,” adds Menhart. “We haven’t made a big splash yet, but we are getting our feet wet.”

Thirteen towns along the Mon joined together in 2013 to form the Mon River Valley Coalition. The organization’s tagline — “Come Down to the River and Play” — says it all. By acting as a region, civic leaders can leverage funds and gain public support for the infrastructure improvements and amenities needed to attract recreational tourism. The coalition is led by Cathy McCollom, principal of McCollom Development Strategies, LLC, and Donna Holdorf, executive director of The National Road Heritage Corridor.

“The Coalition was formed to bring attention to the Mon River as a destination for recreational tourism,” explains McCollom. “That use brings a new, growing and sustainable economy to the region. We are spreading the word that the river is no longer just an industrial highway. It is a magnificent resource.”

“The settlers of this area came via the National Road and The Mon was the first river those folks had to cross.” adds Holdorf. “That history makes our involvement a natural one. Our mission is to assist these communities in achieving their own renaissance, similar to Pittsburgh after the decline of the steel industry.” 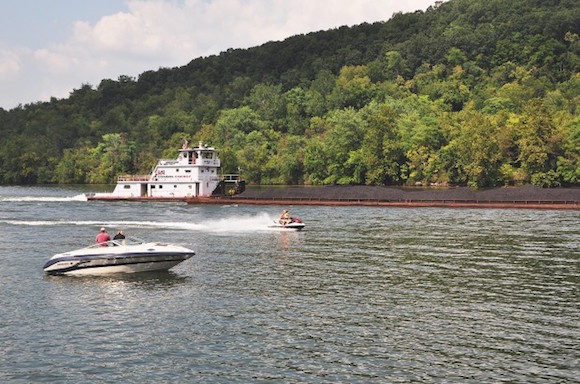 Of the 13 towns in the Mon River Valley Coalition, many — such as Point Marion, Greensboro, Rices Landing, Fredericktown, Brownsville, California, Charleroi and Monongahela — also participated in the River Town Program. That initiative, created by the Pennsylvania Environmental Council (PEC) and directed by McCollom, worked to foster respect for the important role rivers play in our quality of life in Pennsylvania.

Through participation in the River Town program and membership in the Coalition, the individual towns can join forces to develop a regional identity. The communities share expertise and resources with each other, and post their event calendars and sample tourist itineraries for the public at a central website: www.monrivertowns.com.

With guidance from local and state legislators, McCollom and Holdorf helped the Coalition design a Master Plan. That framework will enable the region to raise the dedicated funds needed to develop both heritage tourism and outdoor recreation. The Coalition has already secured over $270,000 from public and private philanthropic sources.

Of the funds raised, $27,000 is earmarked for signage — that way tourists can locate these out-of-the-way towns. Other funds are being used for infrastructure such as accessible riverside docks and parks, as well as marketing the region to its new target market: the outdoor recreation enthusiast.

If You Build It, They Will Come

The small town of Rices Landing in Greene County is easy to miss. It has a population of 460 and no businesses to speak of. But the town has a particularly lovely green space with river access that puts it on any paddler’s map.

“We don’t have business, but we have the river and always have,” explains Rices Landing Mayor Ryan Belski. “We participate in the Coalition for the quality of life for our residents, and for the region and neighboring town’s businesses. And now we have kayakers — we never had them before.” 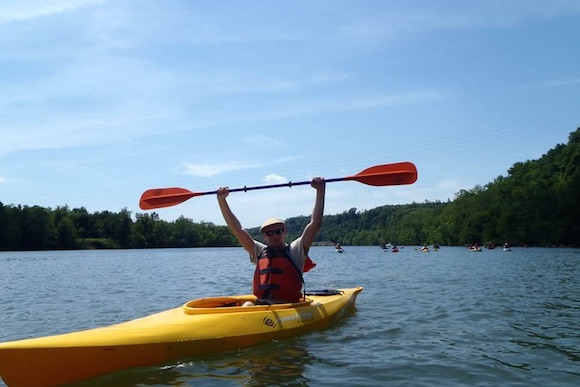 And it’s not just those paddlers.

“Since the coalition got underway, many more bikers and hikers are using the Greene River Trail, which has a trailhead in Rices Landing,” he adds. “We don’t keep hard numbers, but it used to be pretty quiet out there on the trail. Now it is often busy; the county runs 5K races. There are definitely more tourists here.”

In 2013, with encouragement from the River Town Program and the Coalition, Rices Landing’s Riverfest was resurrected. In 2014, the tiny town hosted 6,000 people and over 100 boats for a two day celebration of life on the river. This year’s Riverfest — set for June 12 and 13 — will feature food vendors, children’s games, six live bands and fireworks at the dock.

A few miles north in Washington County, Fredericktown now has a popular dedicated riverfront park. Many local businesses, including a variety of restaurants, are thriving due to their proximity to the water, and participate in the hamlet’s own Riverfest. Ten Mile Creek, a popular paddling spot, is accessible from Fredericktown as is the Greene River Trail. The town also has boat launch access and public docks for fishing.

Dennis Slagle, head of Fredericktown’s Chamber of Commerce, is excited about the growing popularity of The Mon as a tourist destination.

“This region has lived through the ups and down of the coal industry and the steel industry,” he recalls. “Now ripples of a downturn in the natural gas industry are being felt. But the river is a constant.”

A few miles south of Rices Landing sits Greensboro, a historic town founded in 1781 and renowned for its pottery. In addition to river access, Greensboro has its own walking trail along The Mon and a trailhead for the 67-mile Warrior Trail which runs south to Moundsville, West Virginia.

“The river is just like an additional interstate that boaters can use to travel between Fredericktown, Rices Landing and Greensboro,” explains Menhart. 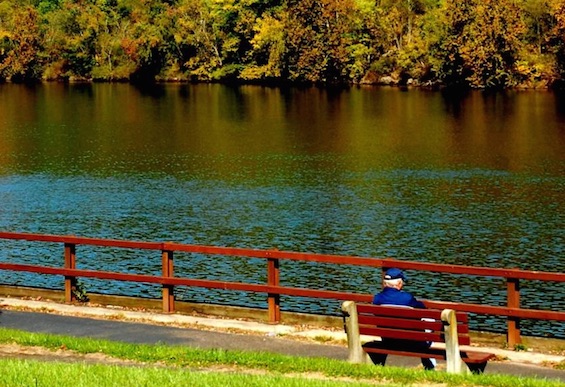 Improvements are also being seen in the town of Monongahela, home to The Aquatorium, a 3,700 seat amphitheater on the banks of The Mon. Eight bands are already scheduled for the upcoming “Rockin’ on the Mon” summer concert series. Coalition funds are being used to improve the venue, including making it compliant with the Americans with Disabilities Act.

At the March 2015 meeting of the Coalition, Donn Henderson, borough manager of Charleroi, enthusiastically outlined an initiative being launched in his town: a riverfront project aimed at attracting live/work development, luring recreational and creative business owners to fill vacancies in Charleroi’s historic buildings. 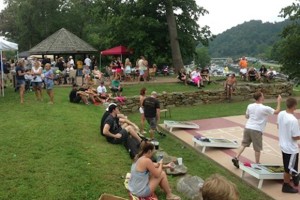 And much more is underway: Accessible docks have been funded by a grant from the Commonwealth Finance Authority and will be installed along with the directional signs in Fredericktown, Charleroi and Monongahela. Grants are also in the works to improve the central park and wharf docks in Brownsville; West Brownsville recently joined the Coalition and is developing a Master Plan.

Come and See For Yourself

Still not convinced to add the Mon to your travel itinerary? Well, May 2015 is a special month: It has five weekends and the last one occurs after Memorial Day. The Mon River Coalition will launch its summer season on that fifth weekend. It’s a great time to get acquainted with the region: A three-mile paddle is planned, and the valley’s towns will be offering up local food, live music and general fun.

Come down to the River and Play!

This story was created in partnership with the Mon River Valley Coalition | www.monrivertowns.com