The future site of the Grace Townhomes 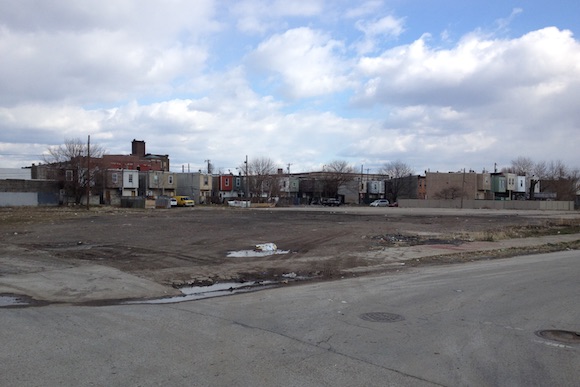 A rendering of the Grace Townhomes 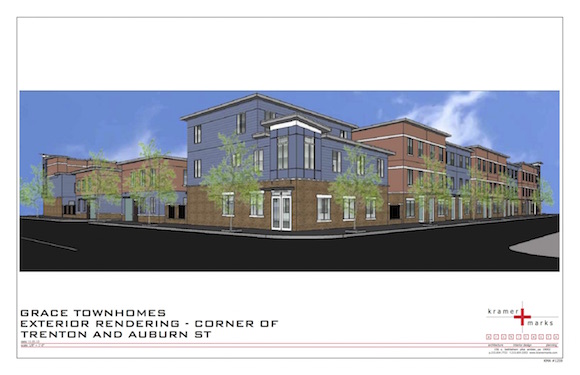 The courtyard at a WCRP complex 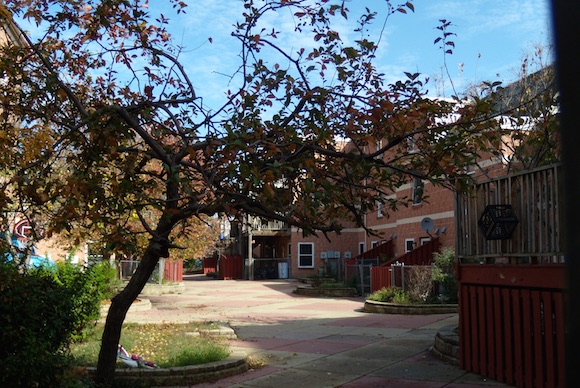 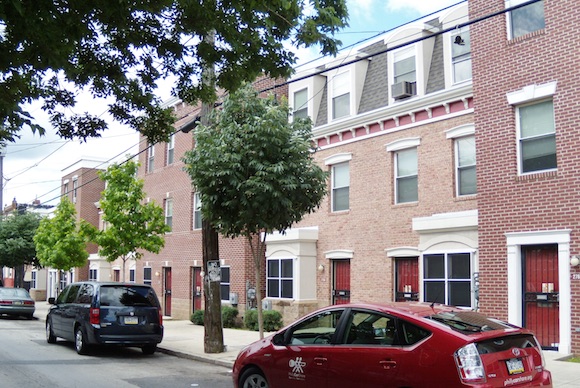 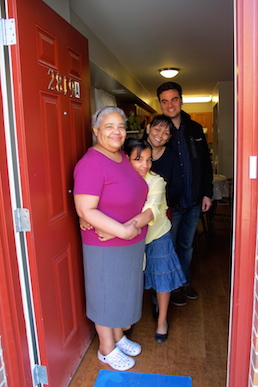 Home ownership has long been one of the central tenets of the American Dream — a ticket to the middle class. But for low-income residents in Philadelphia, securing a mortgage and buying a home is often just that: a dream.

This summer, the Women’s Community Revitalization Project (WCRP) is breaking ground on a new development that seeks to make affordable home ownership a reality for community members in Eastern North Philadelphia for generations to come — and they’re using a powerful tool.

“We realized that with property values increasing so drastically, it was going to be hard to ensure there was sustained affordability,” explains Nora Lichtash, Executive Director of WCRP. “We saw a Community Land Trust as one way of ensuring permanent affordability.”

The design of a land trust guarantees the accessibility of housing stock by capping the resale value of properties, making sure that other low-income residents will be able to purchase houses at an affordable price when they are eventually resold.

Spearheaded by WCRP, the newly-christened Community Justice Land Trust is supported by community members, local organizations and institutions. This summer, construction will begin on Grace Townhomes in Port Richmond — the 36 rowhomes are being built on lots owned by the fledgling organization. These properties will begin as affordable rental units for low-income residents, who will hopefully have the option to purchase the homes in the future.

The Community Justice Land Trust will be the first large-scale residential Community Land Trust (CLT) in Philadelphia, but the housing model’s history in the U.S. dates back to 1969. The first CLT was created in western Georgia as a by-product of the Civil Rights Movement. Since then, the movement has grown to include hundreds of CLTs in urban and rural areas in 46 states, the District of Columbia and Puerto Rico.

“The first thing that distinguishes the CLT from other approaches is that you have community-owned land and you have individually, privately-owned buildings on the land,” explains John Davis, former housing director for the City of Burlington, Vermont and current partner in Burlington Associates, a community development organization that assists groups, including WCRP, in creating CLTs.

Under the CLT model, a non-profit organization — in this case WCRP on behalf of a neighborhood coalition — owns land with the intention of holding it forever. Instead of buying a house and the land where the house lies, a CLT homeowner typically signs a long-term ground lease that grants them virtually all of the rights of a traditional homeowner. They can own the house indefinitely, pass it on to their children, make repairs, build additions and sell the house when they are ready to move out.

But a CLT homeowner does give up one important right.

“The prospective homebuyer is giving up the right to unlimited speculative gains at the back end when they move out,” says Davis. “They’re going to get a fair return on their investment, but they’re not going to get the entire windfall that a homeowner in an unrestricted market-rate house would get.”

The ground lease caps the resale price of a CLT home in order to ensure the continued affordability of the house for the next low-income buyer. In the case of the Community Justice Land Trust, a homeowner will be able to sell their home and receive a profit of between 10 and 50 percent of the market appreciation, depending on how long they lived in the house. The homeowner also gets credit and receives proportionate financial returns for any capital improvements they’ve made to the property.

In order to ensure the continued availability of affordable housing stock in developing neighborhoods, the house is either sold directly to a new low- or moderate-income buyer or back to the CLT, who will help identify a new homeowner.

“The second distinction between CLTs and other approaches to affordable housing is that land trusts don’t just build and then walk away,” adds Davis. “They stay in the deal forever.”

For Davis, the relevance of this model is best viewed through the experience of homeowners during the recent housing crisis. The CLT is a party to all mortgages on its homes (along with the lending bank and the homeowner). When a bank notifies the homeowner of an intent to foreclose on their house, they also notify the CLT, which has an explicit right to intervene in the process. That can simply mean offering legal and financial counseling with the help of a professional real estate attorney in the area, slowing down the foreclosure process, or making payments on behalf of the homeowner to prevent foreclosure.

“In 2008, all around CLTs you had high rates of mortgage defaults and foreclosures,” recalls Davis. “We did not have that in the CLT sector because we stand behind the deal. The land trust and the homeowner are in this together — it’s a marriage.”

“The realtors have kind of redefined it, but in our neighborhood people always called it North Philly or North Philly East of Broad, sometimes Kensington,” recalls Lichtash.

The Community Justice Land Trust was born out two local trends. First, property values were increasing. Whatever the name, WCRP’s neighborhood lies at the intersection of three rapidly developing areas: Northern Liberties to the south, Fishtown to the east and Temple University to the west. With property values already beginning to rise in their jurisdiction, WCRP wanted to act to ensure sustainable affordability for long-time residents.

“These people supported these neighborhoods when nobody else would, when there was disinvestment in their neighborhoods,” says Staci Moore, a community member and WCRP volunteer who now serves as co-chair of the WCRP Board of Directors. “The reward for doing that shouldn’t be that you get displaced out of your neighborhood.”

The second trend WCRP observed was both a challenge and an opportunity. One out of every four addresses in the area was vacant or blighted. Vacant properties exacerbate crime and depress property values, but are also relatively cheap to obtain. If WCRP could obtain land and permanently preserve its affordability, it could help low-income residents continue to live in the community as it develops.

WCRP is trying to get land any way they can, sometimes from other private owners but often from the City. The recent creation of the Philadelphia Land Bank, an effort to create a streamlined and equitable process for developers and residents to obtain land from the City, is a promising development.

“I think [intervention] can become too late in some neighborhoods,” argues Lichtash. “We need new residents, we welcome them. We just don’t want new residents to push out old. So now is the time to think about these strategies.”

The 36 properties in Port Richmond will be the first added to the Community Justice Land Trust, followed by 35 more in Germantown. In years to come, WCRP plans to add additional properties and begin transitioning their existing units into the CLT.

The model is a flexible one. For the first 15 years, Grace Townhomes will operate like a typical affordable rental-housing development. Residents with less than 50 percent of the median income for Philadelphia ($40,000 for a family of four) will be able to secure units at well below market rate, but immediate home ownership is not an option.

“We’d love to do a homeownership project right now, but in addition to no mortgages there are also no subsidies,” explains Lichtash. “Very few working families can get a mortgage right now. Federal, state and local subsidies for homeownership have disappeared.”

Instead WCRP aims to transition low-income renters into CLT homeowners. After six or seven years, the organization plans to connect with existing tenants about their ability to get a mortgage, how to improve their credit, and the responsibilities and benefits of homeownership. After 15 years, Lichtash hopes that many tenants will be able to purchase their homes for between $50,000 and $70,000.

Whether low-income residents end up in rental units or eventually become homeowners in the Community Justice Land Trust, Moore, who is formerly homeless herself, knows the value of a stable, affordable place to live.

“There is a very stabilizing thing that takes places when one is able to have a key they can turn in a lock, open that door and say, ‘This is my space,'” she says. “Then and only then are you able to deal with the other issues in your life.”

BRANDON ALCORN is the project manager for Global Initiatives at the University of Pennsylvania and a freelance writer whose work has recently appeared in Nature, The New Republic and Slate. Follow him on Twitter at @b_alcorn.