By Rebecca VanderMeulen on December 31, 2015

The Sofrito Gastro Pub in Reading is a microcosm of the city’s past and present. A Reading next to the bar, at least a half-century old, recalls a once-iconic, recently revived beverage. Cuban spring rolls and black bean soup on the menu reflect the city’s growing Latin American population.

Owner Hector Ruiz, 37, started in the business as a dishwasher at a now-shuttered restaurant in downtown Reading after arriving in 1991. His family came from Springfield, Mass., to a city where they had often visited relatives. Eventually he landed a position as head chef at a casual restaurant called Tommy’s Café and Cabana Bar, where he worked for 10 years before buying it in May. The old owners, the Community First Fund, state Department of Community and Economic Development and a city microloan program provided cash.

He later reopened Tommy’s as Sofrito. It shares the name with a blend of herbs and spices common in Latin American cuisine. Some of Ruiz’ earliest memories are of making sofrito in the kitchen with his family.

He’s technically part of the nearly 60 percent of Reading residents of Hispanic or Latino origin. But Ruiz, who was born in the U.S. and barely speaks Spanish, bristles at that distinction. He calls himself “an American of Latin descent.”
He isn’t just running a restaurant. He sees himself as part of the effort to revitalize Reading, which has received unwanted attention for the crime and poverty that has plagued the city in recent years. Sofrito buys many of its ingredients from local farmers’ markets and food distributors, and Ruiz hopes to someday buy all of its produce from Reading gardens.

Keystone Edge spoke with Ruiz about Reading’s changing population and why he’s optimistic about his city’s future. This interview has been condensed and edited.

Keystone Edge (KE): You said on a Reading TV station that you see a lot more good happening in the city than bad. What do you mean by that?
Hector Ruiz (HR): Mi Casa Su Casa in downtown Reading is a good local restaurant that’s a hub. PermaCultivate  is doing awesome things with urban farming. Normal people aren’t being murdered in Reading. Joe Bob and Mary walking down the street aren’t being assassinated. People always ask me, “Are you crazy, investing that much money in a city that people say is dying?” I don’t think it’s dying at all. It takes people to take chances and risks. And that’s what we did. But I think that in the long term, it’s going to pay out.

KE: Reading was recently recorded as the poorest city in the country according to U.S. Census data. What role do you see local businesses playing in reversing that?
HR: That’s a tough one. People have to take chances and make it work. That’s what has to happen. I  kids in the neighborhood to come in and clean on Saturdays and Sundays, trying to keep them busy, something to do, because otherwise they’re going to get into trouble.

KE: Do you think that outsiders, so to speak, may see something in Reading that people who have lived here for a long time don’t?
HR: Absolutely, because we’re seeing a lot of people that are coming into the city investing. They’re opening up storefronts. Whether it’s another bodega, whether it’s a multi-services center where you can go pay bills. The storefronts are full. But we need  to come in and attract other businesses.

KE: According to the Census classification, the Hispanic/Latino population made up 58.2 percent of the city in 2010. Do you see this having any positive effect on the city’s future?
HR: There’s a lot of positivity coming out of the Hispanic community. The problem is that we focus on the 2 percent or the 5 percent who are idiots. There’s a lot of good things going on in the Latino community. There’s the Latino Chamber of Commerce. Latinos Unidos, another non-profit organization that’s doing really good things. The Hispanic Center here in downtown is doing really good things. There’s a lot of good happening, but the focus is on the negatives. It’s obviously all of our faults. The Italians went through it when they came into this country. The Irish went through it. Everybody’s gone through this at one point or another when they’ve come to this country.

KE: What has to happen, do you think, for Reading to embrace its full potential and for other people to see it?
HR: We have to stop thinking about what Reading used to be. The ’60s will never be back. The ’50s will never be back. Although they were amazing times of prosperity, there were amazing jobs and mills and the Reading Railroad, it’ll never be that ever again. The city has to be reborn. We need leaders that can connect to the people that live here. We’ve got to get youth and people that are willing to start thinking outside the box. The box no longer is relevant. And the people have to get involved. Everybody has to have a part. 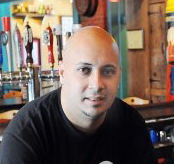