By Joe Petrucci on December 31, 2015
It takes Herb Cohen a few moments to think of and list all the companies and organizations he has founded.

There’s Malvern-based digital pharmacy QuiqMeds and the nation’s largest trainer and marketer of disc jockeys, videographers and photographers for weddings and parties, 800-THE-PROS, which he exited in the early 1990s. Cohen also helped found Temple University’s Center for the Advancement and Study of Entrepreneurship two years after leaving the school as a student, and the Pennsylvania Private Investors Group, which is now the Angel Venture Fair.

The only company he has founded that is no longer in business is Solco Electronics, a business he started with his best friend when he was 12 years old. The good news? He’s still best buddies with that co-founder, and Cohen hasn’t stopped moving since.

His latest, and possibly most impactful venture, is Executive Leaders Radio, a radio program he founded that is the largest business radio show between Princeton, N.J. and Northern Virginia. The impressive roster of guests is what makes the program so impactful, including the likes of Dr. Steven Altschuler, CEO of Children’s Hospital of Philadelphia; John Gerbner, president/COO of Ewing Cole; and Peter Duni, CEO of Safeguard Scientifics, to name a few of the 700 interviewed in the last year. Cohen is quick to point out his program isn’t pay-to-play, but rather one with high criteria for potential guests to meet.

“It’s amazing to hear the adversity that these folks have overcome,” he says.
So what’s up with 800-THE-PROS? That seems like kind of a departure from the other ventures you’ve founded.
Basically, it’s all about building a community. It’s about groups of people. That led me to founding the group at Temple because we managed to get the business community involved in the business school. With 800-THE-PROS it was the same thing. Getting an audience to dance at a party is the same thing as getting people to connect at an entrepreneurship center.

Executive Leaders Radio is almost entirely focused on digging into a CEO’s childhood and upbringing. Why is that such a focus for the program?
We want to help the public appreciate that you can succeed no matter your circumstances. We help the public understand what happened in a CEO’s childhood that made them successful. We expose CEOs who have been there, done that, and how their childhood effected their success. It’s not pontificating abouthow you can be successful, but you’re listening to stories.

So most CEOs aren’t coming from silver-spoon backgrounds?
I think maybe one in 10 CEOs we’ve interviewed came from a gifted childhood. And I’ve had those folks tell me they felt crippled because they weren’t forced at an early age to make money. It literally decelerated their progress.

How is Executive Leaders Radio growing?
Over the last six years, we’ve managed to become the No. 1 business radio show between Princeton, N.J. and Northern Virginia in terms of number of stations we’re on, our geography, size of audience, number of hours programming and quality of guests. We’ve had 700 CEOs on in the last year. We do shows from a variety of locations, from the Greater Philadelphia Chamber of Commerce to the University City Science Center.
What advantages are there for a founder in Southeastern Pennsylvania?
It’s a close-knit community and there are many open doors if you’re interested in starting or building a business, whether it’s high-tech, retail or a franchise. I see Greater Philadelphia as a warm business climate and their are business leaders that have wide open arms to help shepherd serious entrepeneurs to the appropriate resources. They have huge rolodexes and they want to help. And almost every morning or evening, there are meetings and events that serious entrepreneurs can go to and continue to gather resources.
What’s new for the radio program?
We’re interested in helping people who want to get into business get into business. So we’re lending our rolodex and airtime to that through a nonprofit called CoFounders Bridge. We want to connect people of all ages to help them learn from one another, whether they’re starting a company or looking to invest.
What does Southeastern Pennsylvania need to do to better support entrepreneurs?
There are many CEOs that have made money and are interested in getting involved with young emerging businesses, and through CoFounders Bridge we hope to cross-pollinate those interests. Many of these CEOs are financially fit to retire and don’t want to because once that challenge is in your blood, it doesn’t leave. Even though they might not want to work 70-hour weeks, they want to be involved in intellectual challenges. It’s not true that money isn’t available (for startups). We just have to do a better job of making the match.
— by Joe Petrucci
Executive Leaders Radio — team of 11
2004
Herb is cofounder CEO //
Greater Phila Chamber of Commerce
executiveleadersradio.com
[email protected]
Entrepreneurship
Philadelphia 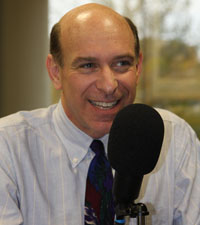