By Joe Petrucci on December 31, 2015
Jeff Kaier always knew he wanted to venture out on his own as he built his career as a senior project engineer in the manufacturing sector. It just happened a little sooner than he expected.

When Kaier was laid off more than 20 years ago, he had recently returned to his Pittsburgh roots and had seven years of experience running projects by himself. So it made perfect sense to make a go of it, and Kaier, then 31 years old, founded Kaier Engineering in May of 1991.

And Kaier isn’t just building stuff for other people. The company’s solutions include standard and customized equipment that helps manufacturers improve productivity. From its first big contract with Bausch and Lomb, Lawrence-based Kaier is building many machines annually for companies like Stericycle, Curtiss Wright, MSA and ATK, handling the mechanical and electrical aspects, prototype design, project management and programming.

Kaier is also a North American Channel Partner for ABB Robotics and a preferred integrator for Kawasaki Robotics, giving the company a steady stream of business from companies associated with those products.

How was it in the early going?

I knew a lot of vendors so I put my name out to those guys. One guy I was pretty good friends with and he was the second phone call I made after I got laid off. He asked me if I wanted to go look at a job the next day. I lucked out, hit it off with the engineers there. The first few months were kind of tough and I lucked out that I got an order from them. I just started one step at a time. My dad had his own business and I was lucky where I’d call him up and say ‘I need a desk.’ I didn’t want to work at home. I set up a deal with him. I put an extra phone line in his office and his secretary would pick it up. It made us look bigger than we were.

Anything else that was important in getting off the ground?

Where I used to work, there was a company that sold motors and related products and they were constantly calling on us. When I was looking at that our first big job for Bausch and Lomb, I figured out how to do the mechanical, but needed to know how to do the electric. I called that company and talked to a salesman who said there was a guy there who might be interested in the project. We set up a meeting and we hit it off and figured out how to do it. What ended up happening was the company was trying to do automation projects because of his expertise. He was probably one of the best electrical engineers I ever met. We collaborated over the next 10 years building numerous machines and systems. I didn’t have to look for work. I just quoted them the mechanical part and it was built at their place.

What was a moment when you realized you were building something special?

Probably in 1998 or 1999, when I decided to bring on our own electrical staff. It meant we weren’t relying on another company to bring us work. Our name was starting to get out. To service our customers properly, we needed to hire someone out. That’s when we started pushing to hire.Now we have 15 people on staff.

How have you weathered the recession?

The industry standard for us is the customer pays for the project, so when we sign a contract for say $100,000, I bill them for 30 percent the day I get the order. Then bill another 30 percent when we’re done designing. So I’ve received 60 percent of the money before I spend anything on hardware. That makes it easier.

We’re always effected by a recession about a year after it hits. In 2002 we had scaled back to maybe five of us. We cut pay by 20 percent. I started looking for jobs and if we didn’t get something in a few weeks we’d be done. We got lucky and got an order. After that we got into a situation that really changed our company. We got in with a medical waste company. They bought a company and decided to take that company’s business model and install it throughout the country. We were involved in that and ended up building 18 systems. We did a lot of engineering for them. It changed everything. When you get that kind of volume and cash flow coming through you can buy bigger buildings, do all that stuff. Vendors look at you differently. That took four years.

First and foremost, you have to learn how to walk away from a job. If I look at something and don’ t know how to do it, I’m not going to quote it. The most important thing you have to do is learn. You can’t sit there and beat your chest and say ‘I can do everything.’ So when I’m sitting here quoting a job, I bring my guys in and do a roundtable and if we can’t figure out a way to do it, we don’t quote it. 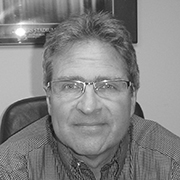