In Philadelphia’s changing neighborhoods, fighting gentrification with a hammer and nail

Que Strand has put up with drafty windows for years. The old wood frames are splintered and cracked, letting air surge into the modest two-story home in the Strawberry Mansion section of Philadelphia. In the winter, the heating system strains to keep the cold out.

“I have to pay extra money for the heat,” she says.

Strand thought about trying to get a loan to pay for the fixes, but she couldn’t put the house up for collateral because her name is not on the deed.

“This is a family house,” she explains. “And everyone except me is deceased.”

Strand has what’s called a tangled title. Her mother and aunt passed away decades ago, and never transferred the deed. This has left Strand as the sole occupant and caretaker but not the legal owner.

According to Tonetta Graham, president of the Strawberry Mansion CDC, tangled titles are a common problem in the neighborhood.

“You have a generation of people living in the house — we call it the family house — but the matriarch or patriarch passed away years ago and the deed was never transferred over to the children,” she says.

Title issues are just one barrier preventing residents from completing basic maintenance, whether the problem is bad plumbing, a leaky roof or drafty windows. Residents can also be declared ineligible for government programs because of back taxes, or their particular repair might not be covered by any of the available options.

Graham sees this as a community problem: If residents can’t fix up their houses and make them livable, they could eventually be displaced. In a neighborhood deeply concerned about encroaching gentrification and rising property values, that fear has placed housing repair at the center of the the CDCs efforts to help long-time residents stay in their homes. 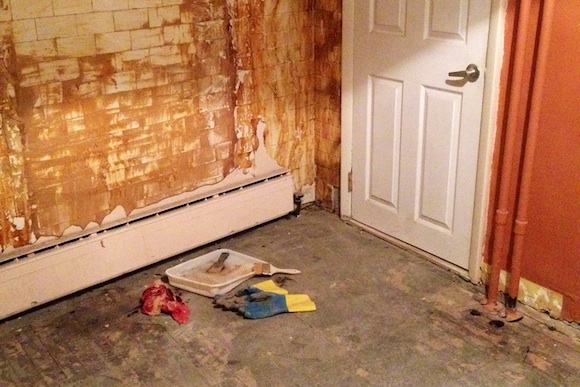 The idea of focusing on maintenance as a way to maintain affordability is not new. The nonprofit sector and local housing agencies have funded repair programs for decades.

“There’s a great amount of value in trying to keep people in their homes rather than have the home become uninhabitable and have to figure out where else they can go,” explains Beth McConnell, policy director at the Philadelphia Association of Community Development Corporations. “We don’t have really good data on how many people actually do get displaced from their homes as a result of bad maintenance, but we see anecdotally that we have a lot of abandoned properties and vacant lots. Those vacants lots were properties at one point in the past, but they became in such bad repair that they had to be demolished.”

The city-wide shortage of affordable housing has only made the idea of investing in existing properties more enticing.

“We have a huge need for affordable homes,” says McConnell. “We don’t have enough structures to meet that need. We still need to do new home construction, but we don’t have nearly enough resources to reach all the people that need it.”

Strawberry Mansion is home to a few recent affordable housing projects, including new units on 32nd and Berks Streets and 28th and Oakdale Streets. But construction has hardly kept up with demand: Over 400 people applied to the live in the 12 units on Oakdale Street, according to the Philadelphia Housing Authority.

Graham’s ultimate goal is to help the community find the right mix of new affordable housing and maintenance of existing homes.

The Business of Homeownership

The first step is to help residents with what Graham calls “the business of homeownership.” That could mean clearing up a tangled title, paying back taxes, or setting up a new mortgage. Those challenges don’t just make it difficult to access loans, they can also make it hard for residents to get government grants for home repairs or access tax breaks such as the Homestead Exemption.

Graham is setting up a Homeowners Advocacy Group to provide an outlet for residents to share information about programs and legal services.

There are a number of improvement programs available, but many are narrowly targeted. The Office of Housing and Community Development provides free repairs on electrical, heating and plumbing systems through its Basic Systems Repair Program. The agency also offers minor repairs to homes owned by residents 60 years or older. (Another program which helps residents “weatherize” their homes — for example, sealing up windows — is currently not accepting applications due to “a very long waiting list.”)

More comprehensive home repair programs are offered by nonprofits such as Habitat for Humanity and Rebuilding Together Philadelphia, but government funding for these groups has fallen in recent years.

The Targeted Housing Preservation Program, which funneled money to nonprofits for home repairs, was eliminated three years ago due to funding cuts. It was replaced by the Basic Systems Repair Program.

McConnell says the old program was more effective because it was more open-ended.

“When we are able to provide a little more flexibility to the nonprofit, they can address a whole range of issues,” she argues.

This is important, she adds, because a house often has a wide range of needs. For example, a program might help repair a leaky roof, but it won’t repair the water damage that has spread throughout the house because of the roof.

More funding could be on its way. Council President Darrell Clarke introduced a bill last May that would issue a $100 million bond to help fund home repair programs, including Basic Systems Repair and weatherization assistance programs. PACDC has endorsed the bill.

Graham, in the meantime, has to work with what is available. She’s planning a door-to-door survey aimed at getting a better picture of the problems community homeowners face. She also plans on working with builders from the CDC’s community contractor pool, connecting them with residents in need of repairs. The goal is that the local contractors would provide a level of flexibility and work with residents on finding a manageable price.

“In Strawberry Mansion, the homes are affordable,” she says, “but they need to be fixed.”

On the Ground is made possible by the Knight Foundation, an organization that supports transformational ideas, promotes quality journalism, advances media innovation, engages communities and fosters the arts. The foundation believes that democracy thrives when people and communities are informed and engaged. For more, visit knightfoundation.org.

ALEX VUOCOLO is a Philadelphia-based freelance reporter who has written about community development, urban planning, state and local government, and the nonprofit sector. He is also editor and co-founder of SPOKE magazine, a print quarterly about people who bike in Philadelphia.