By Ben Franklin Technology Partners of NEPA on April 25, 2017

Let this be a warning to all the entrepreneurs out there: We are not falling for your TAM SAM flim flam scams any more. Seed- and early-stage investors will no longer tolerate the market-sizing shenanigans that many entrepreneurs learned from MBA classes or some expert’s book. 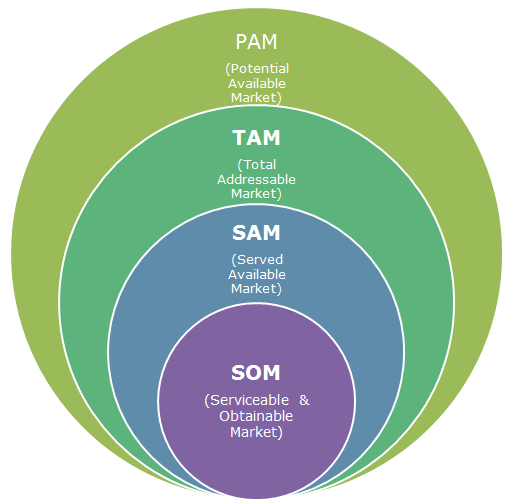 This graphic will be familiar to many who give or receive investment pitches. Generally speaking, the framework is used to depict the size of a company’s target market. The concept begins with a wide-lens and usually global view of the potential market for a product and suggests ever-narrower market-size quantifications. It’s often used to ‘wow’ an audience with an audaciously large potential number before getting down to a more sensible, but probably still unrealistic market prediction.

As a seed-stage investor, I tend to ignore it completely since it really provides insufficient context about the competitive landscape that the startup is actually going to encounter. Let’s go through an example.

An entrepreneur with a new point-of-care test for Lyme disease might use this framework and show a slide or two describing the market this way:

SOM – Serviceable Obtainable Market – Testing for Lyme disease is about half of the treatment market, or $750 million.

As with many flim flams, there is a lot of misdirection in this information. First of all, no investor I know talks in terms of these definitions. In fact, as I discovered doing research for this post, the acronyms themselves are not universally used. Sometimes the “A” is “addressable” and sometimes it’s “available.” And without a 10-minute academic discussion, what’s the difference?

Also note that in the example, the actual qualitative description of the market changes from the PAM/TAM of “Point-of-Care Testing” to “Lyme disease.” I understand that we’re winnowing down to what really matters, but why start with the irrelevant parts of the market in the first place? Finally, even when we really start to get to the heart of the market quantification that matters — the SAM and SOM in this case — the entrepreneur ignores the fact that the $750 million “Lyme disease testing market” probably includes lots of other products and services beyond the narrow product that this particular company will sell.

But the absolute worst part of this type of analysis is what comes on the next slide. It’s there that the entrepreneur’s TAM SAM flim flam scam reaches its denouement! The founder drops a line like, “So you see, by capturing just 1 percent of the market by year three, we’ll be generating $7.5 million in revenue.” Wise investors will now know that this founder has revealed himself as a market-sizing fraud!

There are several better ways to construct the market quantification story of your new venture. The most important of these is to start from the bottom and not from the top. Answer the following questions:

Once you have a better handle on exactly who your customer is, then you can tell me how many of them exist, multiply that number by how much they’d pay and how frequently, and then you’ll have a solid quantification of the addressable market. The percentage of a market captured should be the result of the exercise, not the starting point.

I know that most entrepreneurs aren’t trying to bamboozle us with complex market sizing scams. There are times when founders appropriately use the PAM/TAM/SAM/SOM methodology or some variation of it during discussion of their market, but it’s best used when plotting the longterm vision for a company. If we’re talking about the next 12 months of your startup, let’s be more straightforward and look bottom-up instead of top-down.