The Commonwealth can use all the help it can get right now: In January 2018, Governor Tom Wolf officially recognized the heroin and opioid epidemic as a statewide disaster emergency, the first declaration of its kind for a public health issue in Pennsylvania. Though it is not a specific state problem, Pennsylvanians are keen to tackle the issue and eradicate it from its roots. For that, though, they would need definite knowledge about all things related to opioids, beginning with heroin street names, to know the supply and distribution chain.

“We’re taking hold of the problem,” said City of Reading Councilperson Marcia Goodman-Hinnershitz at the June 13 forum. (She’s also the director of planning and resource development at Berks County’s Council on Chemical Abuse.)

Gombar, whose officers collaborate with both FBI and DEA agents on-site in Reading, called the opioid crisis “by far the most challenging and dangerous” problem he has faced in his career.

According to a 2017 report from the Philadelphia Department of Public Health, the city recorded 907 deaths from drug overdoses the previous year; opioids were found in more than 80 percent of those deaths. Philly now averages 40 uses of Narcan per day, says Rendon. (Narcan is a brand name of the drug Naloxone, which when administered at the site of an opioid overdose, can reverse the often-fatal symptoms). According to Gombar, Berks County officers saved 70 lives in 2017 by carrying Narcan.

Since parks are open to all residents, they naturally attract drug activity, and park agencies are learning how to cope with and even prevent the problem. The crisis touches all parks and recreation departments, urban and suburban, explains Jason Lang, director of East Goshen Township Parks and Recreation, who is also the chairman of PRPS’s recently launched Opioid Task Force.

“We’re starting to understand, from a boots-on-ground-maintenance [perspective], how to keep our workers safe, how to deter drug use in parks, and how to communicate with the public,” he says. “People go to parks because it’s fun and it’s safe, and if your park becomes a haven for drug use, then everyone else who’s using your park might think twice.”

According to Rendon, rates of drug use in park spaces have been rising in recent years due to many factors. It’s now common for people to sell and use drugs on playgrounds in Philadelphia because “the need is so great” for people suffering addiction: They use openly, whereas before the problem may have been less visible. Removal of large encampments of people experiencing homelessness has the unintended consequence of pushing drug dealers and users into playgrounds, parks, and recreation centers. 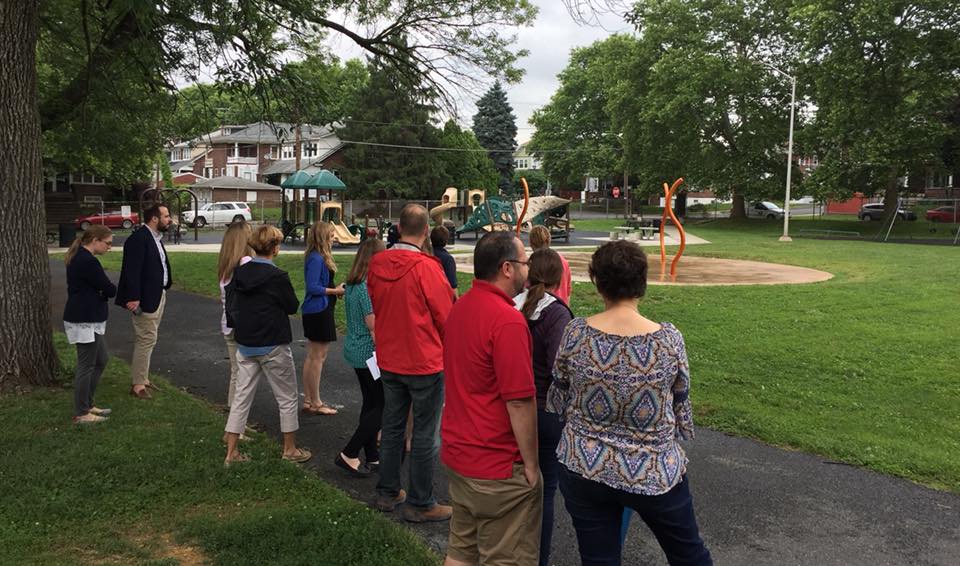 There’s “a misperception that this is only a law enforcement issue. It’s not,” he adds.

“We cannot arrest our way out of this problem,” seconds Gombar.

That’s part of what brought Pennsylvania parks and rec professionals from across the state to Reading in June.

“This is a reality of something that happens in parks,” explained Heather Dighe, executive director of the Lancaster Recreation Commission. “We want to make sure that our staff are prepared to handle that.”

Reading Recreation’s Lauren McCormick, a camp counselor for kids ages 6-8, was also listening. A Reading-High graduate who’s been working with Reading Rec since last year, she’s seen crisis up close, including a friend who was college-bound before addiction took hold.

“It’s scary, because you don’t want any of the kids getting ahold of this stuff,” she said of her work on the playground.

Dangerous residue from drugs like Fentanyl (often mixed with heroin) and paraphernalia like needles endanger the public and park staffers; used needles can transmit blood-borne pathogens such as Hepatitis B and C, and HIV.

Park maintenance professionals in Philadelphia get special training on how to handle these risks, along with gear such as extendable mechanical grippers and needle-proof aprons, gloves, and trash bags.

Park professionals can do a lot of basic things to cut down on drug use in outdoor public spaces, argued Reading Recreation Executive Director Daphne Klahr, also in attendance. Staffers can ensure clear lines of sight, maintain lighting, raise the canopies of trees, and make sure bushes aren’t blocking park trails – all measures that discourage drug users. She urged her colleagues to team up with police officers for assessments of park grounds.

Lang adds that timed locking systems for park facilities (like bathrooms) are crucial: Doors that automatically lock at dusk – with an inside lever in case of a mishap – keep drug use out of these spaces overnight.

Methods to develop public awareness around the problem are still in their infancy, but Rendon and Lang both hope that signage and other educational campaigns can help. But there are a lot of questions to answer: What can agencies put on the signs? What information is most useful? What languages should be employed? What resources should be displayed?

“That is probably one of our biggest goals for the task force,” says Lang. “What should parks know about drug use? How can they protect their workers? How can they communicate what the public needs to know?”

A formal case study, in partnership with a local university, is another major goal. Lang hopes that examining a selected recreation program alongside a control group could “quantify how parks and recreation can reduce drug use…or keep someone in recovery if they’ve recovered.”

Because stopping drug use within parks isn’t the only role these spaces can play in combatting the crisis. Lang and PRPS believes parks-and-recreation organizations have an important role to play in addiction recovery because they’re already positioned as leaders in promoting health.

“Traditionally, that has been through playgrounds and trails and fitness classes,” says Lang. “But now we’re seeing how we can affect the mental health and the physical education side of drug use.”

People re-entering communities from recovery centers may be particularly vulnerable, as intensive support structures fall away. Park programming can step in with activities such as trail-running and kickball teams, building new physical habits as well as healthy new social networks and good self-esteem, keeping people on the path to recovery.

“We do that already with our population that doesn’t use drugs,” says Lang. “It’s a natural fit for us… Why don’t we do it for this special population?”

Prevention is a natural fit, too, especially with programming targeting youth ages 12-18. Teens can find safe, productive ways to spend their time, build their self-worth, identify and practice new skills, and find good role models within local parks – all of which helps tackle drug abuse at its roots.

With the state – and the country – facing such a complex challenge, events like the June Exchange have an important role to plan in sharing and developing best practices.

As Dighe put it, “If we don’t talk about it openly, how are we going to address the issues?”

Keystone Edge Publisher Greg O’Loughlin is a founder and partner at SWELL, LLC; the company is the advertising agency behind the “Good for You, Good for All” campaign, in partnership with PRPS and DCNR.