Set aside for the enjoyment of the people, parks are arguably the most public of public spaces. But cultural barriers prevent some populations from fully utilizing their neighborhood parks.

Newly arrived immigrants often don’t know the rules of park spaces. Parents of children with disabilities see hazards in typical playgrounds. Residents of poor neighborhoods do not frequent parks when they are poorly maintained or abandoned. African-American parents fear their sons congregating in public spaces, leading to interactions with the police. These are just some of the concerns aired at the round table discussion on diversity, equity and inclusion.

According to several speakers, diversity among outdoor professionals can give an organization an ambassador to an underserved community, but that diversity is often lacking.

Deonna Dykes, a volunteer at the Student Conservation Association, said she has had success engaging young, African-Americans in reviving the long-dormant Martin Luther King Community Garden and other parks in the Hill District because she was from “the Hill.”

“I was working with kids in my community,” said Dykes. “It was easy for them to relate to me because I was someone that looked like them.”

Also, a mere 12.8 of new staff hired by these organizations in the three-year study period were from ethnic minority groups. Just 11.7 percent of staff hired for government environmental agencies were minorities. Many leaders in the field supported diversity initiatives. Few organizations had any. This leaves many institutions without a representative to certain populations.

Bey said the cost for a child to attend one of the Conservancy’s camping trips ranges from $40 to $100, causing the organization “to get less people of color because they can’t afford it,” which in turn means “they feel less welcome because they don’t see more people like them.”

The organization offers scholarships to help ease the financial burden, but the comfort factor — making minority kids at ease in a predominantly white area, like those where the Conservatory holds camps, with a mostly white group of campers — is trickier.

“The conversation has been happening and I have been included, so we’re trying,” said Bey.

Dykes added that some kids don’t grow up thinking of park space as accessible. When she was growing up, the community gardens she has since helped revive were “literally locked and the grass was so high, you couldn’t tell there was a garden.”

Alternatively, a program can thrive through word of mouth in a tight-knit community. Edward Ulrich, director of the City of Pittsburgh’s Healthy Active Living Center, which hosts exercise and health programs for seniors, said that the initiative has drawn a large number of Chinese immigrants. That has happened without targeted entreaties to that community and despite the fact that no one at the center speaks a Chinese dialectic.

Bishnu Timsina, a career counselor at Jewish Family and Community Services Pittsburgh who works with immigrants and refugees, said park space can be confusing for newly arrived people, particularly those used to living in open areas where the division between organized recreational space and the general community is not as well defined. 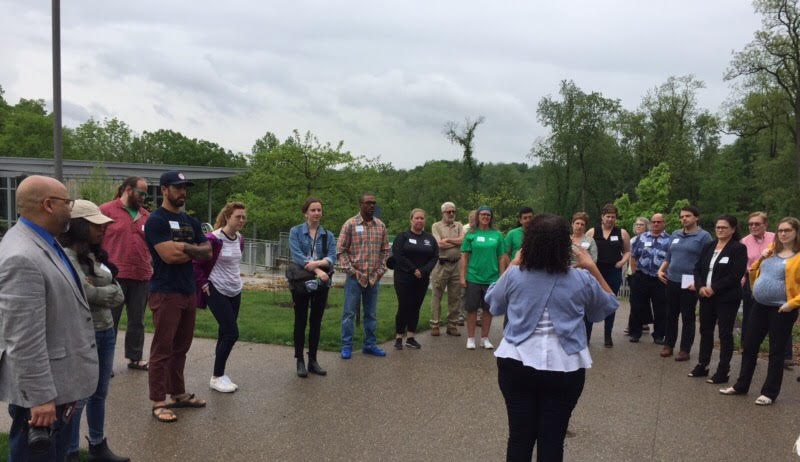 “Our kids would go and play soccer where there was baseball [preplanned] and that would lead to some misunderstanding,” explained Timsina, an immigrant from Bhutan.

Sometimes, it can take some experimentation for them to understand reservations, scheduling and specialty areas.

Meanwhile, Jamie Upshaw, founder of Autism Urban Connections and mother of an autistic son, explained that parks can present an array of dangers to neurodiverse children — and many of those dangers are invisible to the average park goer or city planner. Some kids are “bolters” who will run into wide-open space, leaving parents behind. Others can’t ascertain the risks of gravel or concrete.

She praised Burgwin Park in Hazelwood for providing amenities adapted to kids like her son.

“A pool can be a very dangerous thing in the community, so that spray park is perfect,” said Upshaw. “The park is handicapped accessible. We have a nice handicapped swing for the kids. We have the rubber tire stuff on the ground.”

Upshaw fears for her older child just as much when he’s at a local park.

“I’m also the mom of an almost-15-year-old black son,” she said. “Parks aren’t a place we always go because of fear of how we’re misrepresented, so to speak. We encounter it on a daily basis and it’s sad. We put up a basketball hoop in the house so we don’t have the police messing with our boys.”

Shawn Taylor is site supervisor for Landforce, a land stewardship and environmental management nonprofit, that hires formerly incarcerated people, returning veterans and others at risk for unemployment. An African-American man, he explained that he sometimes gets funny looks or strange silences when working outside the city. Taylor has never had a nasty encounter, just a few awkward ones.

“They are probably not used to seeing a guy of my color in that area,” he said. “When I am out there, I try to [introduce] myself in the best way I can, to those I do encounter, and let them know what we’re doing.”

It’s never ruins the beauty of nature for him.

“Even though I do work in it, it gives me some sense of relaxation and somewhat of a therapeutic environment as I listen to trees,” said Taylor. “When I am out there…those sounds allow me to relax and clear my mind.”

Jennifer Layman, the regional vice president of the Student Conservation Association, said that one notion she took from the seminar is that people in minority groups live with a level of discomfort in public. That can be compounded by discomfort with being outdoors, away from the ease of technology, simple comforts and, when venturing out into the woods alone, safety in numbers.

“I think the outdoors itself as a barrier is scary for the first time, or the tenth time,” she said, “because we don’t experience it day to day.”

NICK KEPPLER is a Pittsburgh-based freelance journalist whose work has been published by The Gizmodo Media Group, The Financial Times, The Daily Beast, The Atlantic, Slate, Vice, and others. His website is nickkeppler.com.

* Keystone Edge Publisher Greg O’Loughlin is a founder and partner at SWELL, LLC; the company is the advertising agency behind the “Good for You, Good for All” campaign, in partnership with the PA Recreation & Park Society and the PA Department of Conservation and Natural Resources.