This story originally appeared on CityWideStories.com, a Philadelphia-based online publication focusing on the doers, makers and change-makers within the region, and spotlighting voices that aren’t always heard. Follow them on Facebook, Instagram and Twitter for daily updates.

“How do we make ourselves different from any third wave coffee shop in Philadelphia?'”

That question inspired Thu Pham and her two business partners to create Càphê Roasters, the first and only Vietnamese coffee roaster in Philadelphia.

“The first wave was Folger’s and Maxwell House, coffee that was mass produced, and [that] you can make at home,” explains Pham. “The second wave is Starbucks and those big franchises. The third wave is more specialized coffee, for example, in Philly there is Elixr Coffee, La Colombe and more. They’re all great in their own way, but the only difference is what kind of coffee they are sourcing and producing.”

As a Vietnamese American, Pham wanted to create coffee that reaffirms her identity.

“We asked [each other], what about Vietnamese coffee?” she recalls. “I’m a Vietnamese American and my other two partners are Korean. There’s a huge community of Asian people in Olney and also in South Philly…. There’s a lot of Asian heritage and culture in Philadelphia that we wanted to celebrate.”

Pham studied psychology and marketing at Drexel University and was applying for a master’s program in business administration when she encountered a video from 12PLUS, a nonprofit that encourages students to pursue postsecondary education. The piece described the life of a Kensington student who overcame various trials and tribulations. 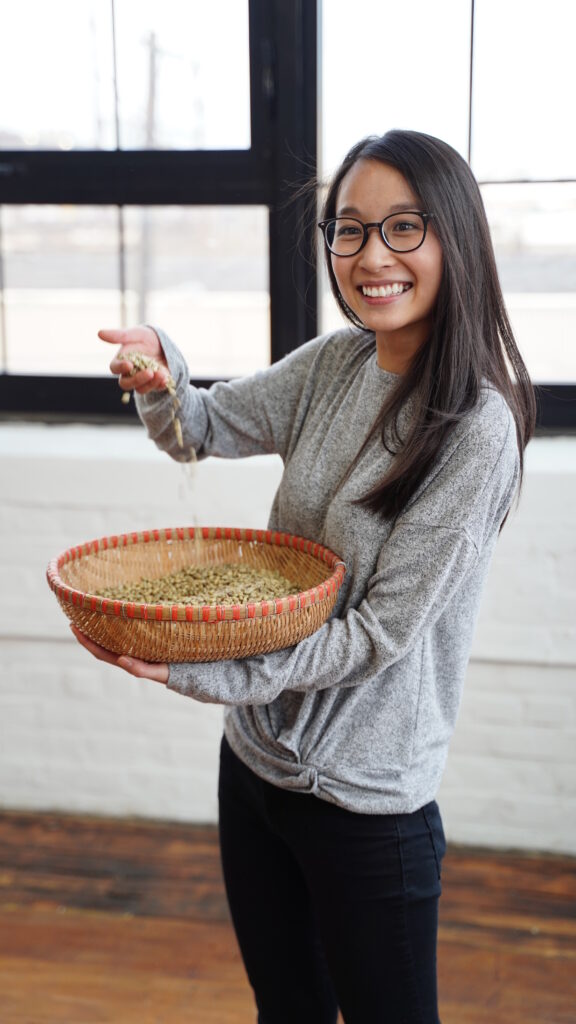 “That resonated with me because, growing up as an immigrant daughter and not living in the best conditions, I have experiences that I want to share with these students to inspire and motivate them, and show them that they can get through it,” says Pham, who took a job at Kensington Health Sciences Academy. “My parents raised me to be so giving that I couldn’t escape the value of active service.”

12PLUS founder Raymond John is now one of Pham’s business partners, and she hopes to eventually provide jobs and professional experience to leaders of tomorrow.

“We said, let’s definitely focus on Asian coffee, but let’s also think about how we can give back to the community,” she explanins. “So eventually we’re going to hire students to do the daily operations of the business. They’re going to learn how to roast coffee…. Right now I’m the head roaster and roast all of the coffee, but eventually as we get more wholesale clients and things pick up I’m going to need more support. They can become an apprentice and I can focus on other business-to-business relationships.”

The roastery is based out of MaKen Studios, an intentional decision to place the business directly in the diverse Kensington community.

“In the Kensington area there are a good number of Vietnamese immigrants who have dedicated their lives to this community,” says Pham. “Under the Market-Frankford Line on Kensington Avenue, there are a bunch of pho places, hair cutters and nail salons. What I’ve also noticed from speaking with my students in the school that are Vietnamese, [is that] they’re moving into the Kensington area because housing is more affordable.”

According to Pham, the traditional Vietnamese coffee-brewing process is just as important as Càphê’s blends. Water is poured into single-cup stainless-steel filter and allowed to slowly drip into the cup below, then stirred into condensed milk.

“The process is really transparent and humanistic in that it takes a lot of attention — a four to five minute brew that you have to be really present with,” she says. “Imagine if you got this at a restaurant. It forces you to be present with the person across from you and [it] is like the middleman for conversation and the bridge of different cultures.”

Pham plans to continue building Càphê Roaster’s wholesale client line and fostering partnerships so that the business can earn more revenue and employ students from its partner schools. Having a storefront retail space to sell coffee is a longterm goal, and a plausible one based on the popularity of Càphê’s pop-up events.

“Everyone has this appreciation for coffee, whether they drink it or not,” says Pham.