A PA town produces 68 percent of the country’s mushrooms

When Kennett Square native Jim Angelucci joined the Navy at 17 — he ended up working intelligence in Guam for almost two years with top-secret cryptographic clearance — he swore he was done with mushrooms.

But then he was home on leave, enjoying an outdoor kegger with some friends. Music streamed from the radio of his father’s 1968 Buick Riviera. Angelucci tried to start the car, but the gas pedal stuck and the battery died. He couldn’t get the car in gear, and it crashed into a nearby mushroom house.

“Fortunately, no one got hurt,” he recalls. But he had to pay for the damage by picking mushrooms. “And that’s how I got back into the mushroom business.”

Mushrooms are big in Pennsylvania, and no where bigger than in Kennett Square (also known as the “Mushroom Capital of the World”). Today, the Commonwealth of Pennsylvania produces 68 percent of the mushrooms grown in the U.S., and Chester County has the largest concentration of growers anywhere in the country (more than 50 family-owned commercial mushroom farms operate within 25 miles of Kennett Square, out of a little more than 100 commercial farms nationwide).

Then there’s the annual Mushroom Festival. The picturesque Chester County borough is home to just over 6,000 full-time residents, but during the weekend after Labor Day, a mile-long party draws an estimated 80,000 to 100,000 people to the area. 2019 marks its 34th iteration, with events running September 6-8.

Now the general manager at Phillips Mushroom Farms (a fourth-generation mainstay of the industry dating back to 1927), Angelucci says the festival originally launched as a way to promote Kennett Square, but as the mushroom business grew, the festival found its identity. It draws fans from all over the country, from Florida to Kentucky to California, and abroad.

Lafferty also heads up the Mushroom Festival — she first got involved at year 16, and took on the official role of Festival Coordinator a few years after that. Like everyone who works the event (except for one contracted administrative staffer), she’s a volunteer.

“It used to be people would drive from Philadelphia to Longwood Gardens, and they thought Longwood Gardens was Kennett Square,” she explains. “They had no idea there was a town here.”

It’s a marvelous confluence of tourism and industry. Angelucci, the oldest of five kids in one of many local families with Italian roots, got into the business early. Mushrooms were traditionally a winter crop, and his first job was to roll the mushroom-house boards back into place after they dried out over the summer. From there, he went on to a job at a compost-making company down the road.

“I was the little kid on top of the pile with the hose,” he says. He made 25 cents an hour. When he took his check to the shop on the corner, “they’d make me wait outside while they cashed it, because I was a little odiferous from standing on that pile.”

As he grew up, he worked in many aspects of the business alongside friends and family, in addition to a job at a local bakery. After that stint in the Navy, he got an offer to come on at Phillips as an assistant grower; it was December, 1973.

“The rest is history,” he says.

Growing mushrooms is a way of life in Kennett, but outsiders often misunderstand the delicious fungi. According to Lafferty, the mushroom-growing displays are always a popular educational destination at the festival.

“People have no idea,” she says. “They think mushrooms are grown in a field.”

They aren’t. Today, commercial-scale mushroom growers work in specialized climate-controlled buildings, where it’s dark, chilly, and humid. A mushroom harvest has several stages. First, mushroom spores — much tinier than seeds, invisible to the naked eye — must be mixed with a substance like grain, sawdust, or straw that provides the nutrients for the spores to germinate (unlike plant seeds, they can’t do it under their own power). This mixture is called spawn. Tiny roots like white threads begin to grow, and this is called the mycelium.

Next, the mycelium is spread onto a pasteurized substrate. In decades past, this was usually wheat, rye, or millet, though now some growers work with synthetic substrates. In a few weeks, the mycelium colonizes the substrate, and that’s how the mushrooms themselves finally grow.

And grow they do in Chester County, but not because of any unique qualities of the landscape or climate. According to Angelucci, it was ingenuity, hard work, and proximity to several major cities that made Kennett the mushroom capital.

The industry dates back to the mid-1880s, when a carnation grower’s son noticed wasted space under his father’s garden beds. He got an idea and boarded a steamship to Europe. He came back with mushroom spawn and experimented with growing it under the garden beds. It didn’t work out well, because carnations and mushrooms need different growing environments.

But in 1902, the region got its first dedicated mushroom house, a windowless two-story structure built into the side of a hill.

Today, Pennsylvania’s number-one industry is agriculture, and its number-one vegetable cash crop is mushrooms, worth well over $400 million a year. And “it’s not only the largest cash crop,” explains Angelucci. “We buy so much hay for our substrate that hay is the second-largest cash crop.”

The benefits roll on: many of the materials the growers combine into their substrate include things that would otherwise end up in landfills. And the leftover substrate, after the mushrooms are harvested, is now a popular material for everything from rooftop gardens to reclaiming strip mines.

Meanwhile, the Mushroom Festival has changed over the years. It used to include tours of local farms, but modern food safety regulations now keep them closed to the public. The fest also boasted a Miss Mushroom pageant with a $5,000 scholarship as top prize. Local farms would sponsor different contestants.

Today, you won’t find a Miss Mushroom, but things do kick off on Friday night with a parade, followed by a massive two-day street celebration featuring food, music, arts and crafts, and more. (The fest is accessible for folks using wheelchairs, with dedicated parking and ADA-compliant restrooms available.)

Lafferty played a big role in making the event what it is today, dedicating resources to build kid-friendly programming and making the fest a draw for the whole family. She also turned it into a philanthropic powerhouse.

“When I got involved, the Mushroom Festival itself was in the red,” she recalls. She took the philosophy that “the only way you can make money is to give money away.”

Lafferty got sponsors on board, and began donating funds to local nonprofits through the festival. They started small, donating only about $5,000 the first time around. But by adding a small entrance fee for the street fair (now $3 per person), employing volunteer workers, and collecting vendor fees — plus the fact that many vendors donate a portion of their profits — the festival is a now a major grant-maker. 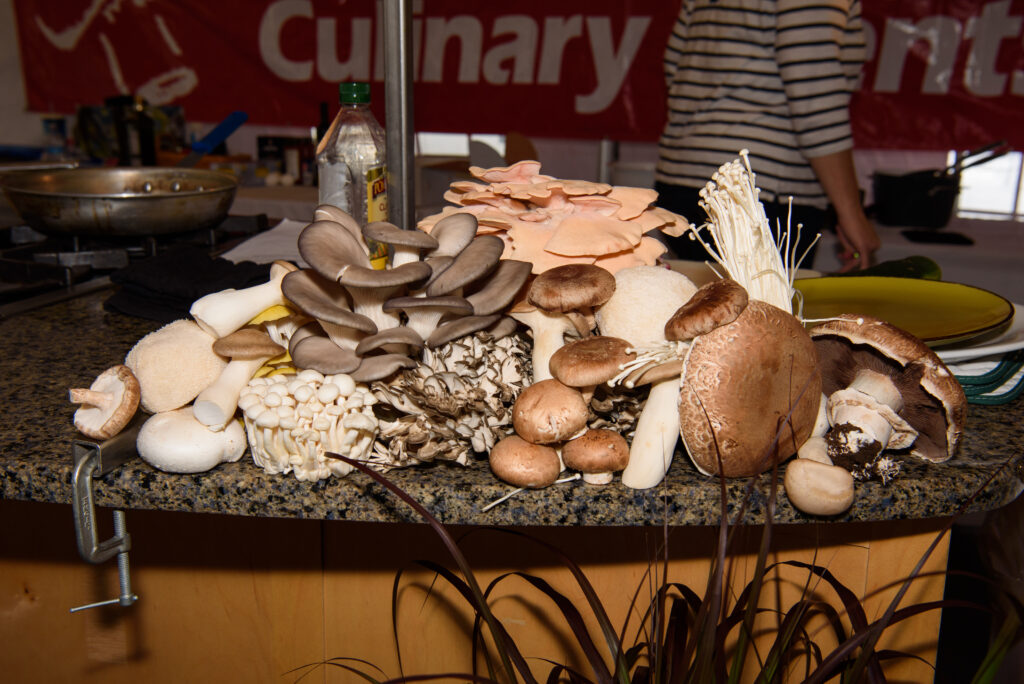 Since 2000, the Mushroom Festival has given about $1,000,000 back to the community. Last year’s grant recipients ranged from library and literacy programs, to animal welfare, to fire and EMS services.

Right after each year’s festival, board members mobilize for next year. Every January, planning begins in earnest.

“It’s just a big party,” says Lafferty. “When it gets here and it’s good weather, I just don’t want it to end.”