Creative people use many mediums to express their ideas. Art, literature, and music are the usual suspects. But crafters come in many forms: producers of body care products, craft brewers, jewelers, and even event organizers. On September 21, makers of all stripes will gather at the Cre814 Festival in downtown Altoona.

Now in its second year, the event is the brainchild of local small businesses who came together to spotlight the 27 counties of the 814 area code. One of the organizers is Jen Hrivnak, creator and owner of /JOOS/ in downtown Hollidaysburg. Her husband, John, owns two businesses in downtown Altoona: Railroad City Brewing Company and a soon-to-be-opened cidery and wood-fired pizzeria.

“For me, a big part of it is getting people here to witness the redevelopment of downtown Altoona,” says Hrivnak. “Last year, people came to 11th Avenue who had no idea all of this was here. They were going to vendors that day and also to the businesses, carrying around Fox Hollow [boutique] bags and Clay Cup coffees.”

For those new to downtown Altoona, the quaint shops, coffee houses, breweries and restaurants might seem typical for a thriving small city. But for those who know the history of the area, the business boom is something to celebrate.

In the days when the railroad dominated the city, Altoona thrived. But then came years of population decline and divestment. Shops closed and buildings fell into disrepair. The crumbling infrastructure was an eyesore and the area became a place many avoided.

Signs of life popped up about 20 years ago when Penn State Altoona and what is now UPMC Altoona invested in the area. Small businesses followed suit and the district has become a hub of locally owned, diverse enterprises. Entrepreneurs are attracted to downtown for its rich history, sense of community, and increasing foot traffic.

That’s why Steph Hite, co-owner of the skincare store Trade Secrets, decided to set up shop downtown. She and her husband Andrew sell natural body-care products created from his formulas.

“When we started out, we did a lot of home-based vendor events,” explains Hite. “It was a rough first year. Then we decided to do something on our own. We thought since all of the downtown business owners are our friends, let’s bring the community together.”

Hite was on the committee that spearheaded last year’s inaugural Cre814 event. There were about 50 vendors, ranging from food artisans to metal workers to biscotti bakers to slime markers and everything in between. Bands played on three stages. 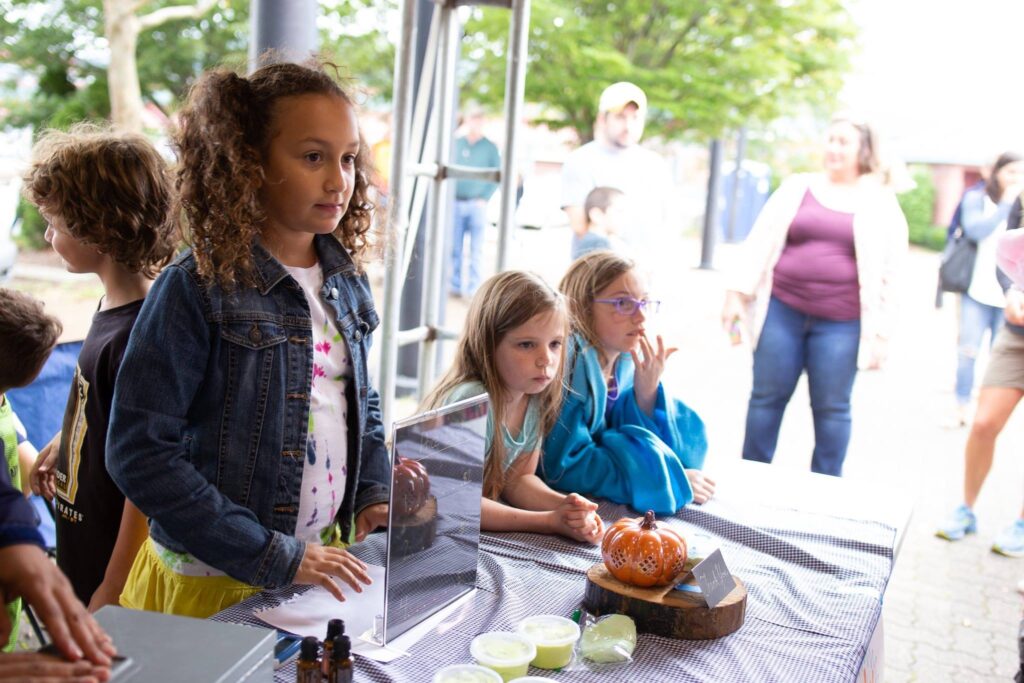 “Downtown businesses and vendors had record sales,” recalls Hite. “It was such a nice, eclectic group of people and there was a little bit of everything. It was family-oriented. There was face painting and people enjoyed the music.”

The musicians committed to performing original songs— no covers — since the day was about embracing creativity.

Devin Pierce, music coordinator for the upcoming event, is enthusiastic about the bands playing this year’s Cre814. The Crew of the Half Moon, a three-piece “rock-and-roll gypsy circus” (per their website), signed on to perform; other artists include metal outfit Bushido Code and blues rock band Black Cat Moan.

His efforts are part of a larger project to bring creators and artists into the area.

“So often bands and touring musicians go to Pittsburgh and hop back to Philly to play,” explains Pierce. “They think there are only those two sides to Pennsylvania. I would like to get rid of that stain. I’d like us to be like Morgantown [West Virginia]: With so much happening, it’s the place to be. I believe it’s already on its way for us.”

“We’re getting an art scene back in the area and it’s starting to thrive,” adds Hrivnak. “Not every kid fits into an academic or an athlete. They need other stuff to do. The arts to me is a big part of that…There are small homegrown businesses and art organizations that are supporting the ballet and the symphony. It’s amazing.”

Hrivnak sees Cre814 as another mechanism to nurture the creative community. The organizing committee hopes that, this year, even more locals showcase their wares. 2019 vendors include Being Liang CBD products, A Couple Smart Cookies and TK Turnings.

“This year we want to see more people, now that they know they have a reason to come down,” she says. “We want to get rid of that underlying negativity about downtown. Until [visitors] get down here, they don’t know that there is really a lot of cool stuff going on.”

The group is hoping to continue this event every fall.

“We’ve been reaching out to businesses on the street telling them the festival date and asking how their businesses can be involved,” explains Hrivnak. “Railroad City Brewery will have a special beer and will release a four-pack for the event.”

Business growth aside, the group is committed to cultivating a community that their families can be proud of.

“I want my granddaughter to feel like there is culture here, that there are different things to do,” says Hite.

“We want to take some of the experiences that most people only attribute to larger cities and bring them here at some level,” adds Hrivnak.

“The world is too big of a place that culture is only deserved in [big] cities,” he says.

AMANDA DRUMM has been in the communications/marketing field for 15 years. Based in Altoona, she currently writes articles and blogs, and manages social media pages and websites for local and national businesses and organizations.