Get inspired at this higher-education hidden gem

Back in the 1980s and ’90s, you could have driven by Alvernia College (as it was called then) and missed it completely. Hidden by a grove of pine trees and tucked away in a quiet residential neighborhood in southwest Reading, the small Catholic college was little-known outside of Berks County.

The Bernardine nuns who established an orphanage in what is now Francis Hall — built it 1920, it’s the oldest building on campus — would doubtless be astonished at the modern, 3,000-student university that now thrives among the remaining pines.

The evolution from orphanage to high school to teacher’s college (first for sisters and postulants, then lay women, then men), to accredited liberal arts college took 40 years. After that, Alvernia grew slowly but steadily. In 1999, the institution began offering master’s degrees.

But the inauguration of the college’s sixth president, Dr. Thomas F. Flynn, in 2005 marked the beginning of accelerated, unprecedented growth. Driven by his vision of Alvernia as a service-based, community-centric university, the goal is to produce “ethical leaders with moral courage.” Flynn, who retired in June, made his mark not only on campus, but in the Reading community, where he is revered for his humility and ability to pull diverse people together. The school’s new president, John R. Loyack, took office on July 1, 2019.

In fall 2006, Alvernia announced its first doctoral program, a Ph.D. in Leadership; by 2008, its 50th anniversary, the school officially became Alvernia University. Meanwhile, the campus grew at a dizzying pace thanks to a 2009 fundraising campaign that drew over $31 million.

During Flynn’s tenure, athletic fields have been added; Francis Hall has undergone a significant renovation; a series of new residence halls and a new Campus Commons have been built; and a handsomely landscaped quad has tied the campus together with plenty of room for gatherings. 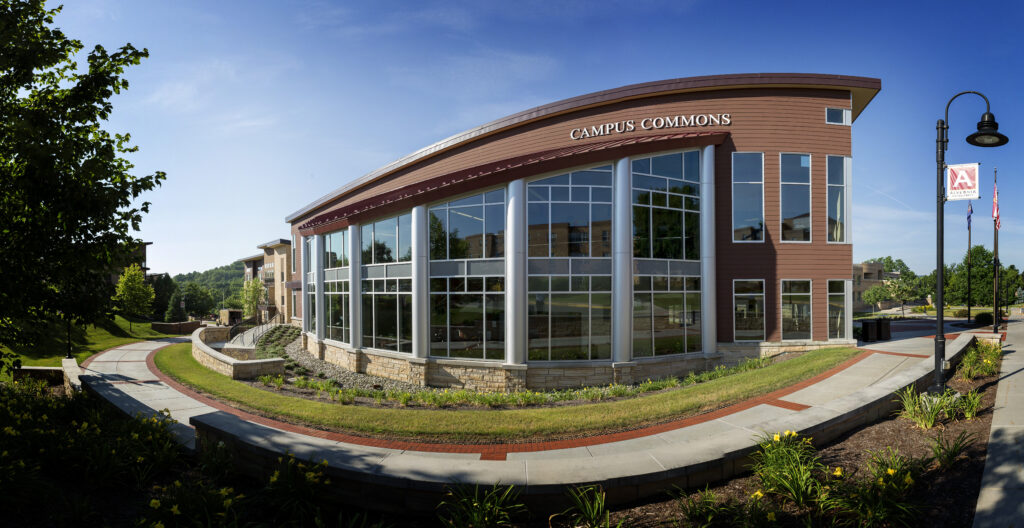 And the administration is not finished yet: The ambitious new Recreation, Wellness and Health Sciences Center (the “PLEX”) recently opened on the East Campus. This adds 100,000 square feet of academic and recreational space, and 15 acres to the Alvernia campus.

But as impressive as these buildings look, the real significance of Flynn’s tenure — and Alvernia’s rising stature as a regional university — is much more expansive. Flynn espoused an innovative approach to higher learning, inspired by the Franciscan values of the original Bernardine Sisters, who came from Poland in 1894 to establish a ministry in Pennsylvania and eventually settled in Reading.

Those values — which include service, humility, peacemaking, contemplation and collegiality — are the basis for every program initiated by Flynn, from requiring every student to perform at least 40 hours of community service; to the alliances Alvernia has formed with Berks nonprofits and the Reading School District (RSD); to Flynn’s signature interfaith projects.

The result is a university that is uniquely integrated with the surrounding community. Alvernia’s Holleran Center for Community and Global Engagement boasts numerous outreach programs.

“Alvernia is not an institution with a large alumni base, so we have grown and thrived largely with the support of the local community,” says Holleran Center director Jay W. Worrall*. “Our work in the community is primarily because we feel that Reading is a great laboratory for our students, but it’s also Alvernia giving back to the community that has helped us for years—individual philanthropists, local businesses, nonprofits and the city government.”

Flynn announced the creation of the center just after his inauguration, and for two years, it focused on bringing community members to the campus for lectures, exhibits, and interfaith activities. It also launched Alvernia’s campus-wide days of service: four days during the academic year when students volunteer in the community. These happen on the first day of the year for freshmen, when students help local schools prepare the playgrounds and classrooms for the year; St. Francis Feast Day (Oct. 4); Martin Luther King Day; and Earth Day. These events are designed to create a “culture of service” for Alvernia students, who volunteer an estimated 40,000 hours a year, starting the day they arrive.

Since 2008, thanks to a historic gift of $3 million from Berks County philanthropists T. Jerome and Carolyn Holleran, the Holleran Center has been able to expand its activities.

Programming now includes work/study, volunteering and internships. As part of the South Reading Youth Initiative, about 75 Alvernia students run an after-school program in the nearby Millmont and Tyson-Schoener elementary schools. They serve snacks, help with homework, and provide educational and recreational activities for about 50 to 55 kids in each school.

In addition, the Holleran Center’s Courtney Bieber manages the Reading Collegiate Scholars program at Reading High School — Alvernia students help mentor students who want to attend college by assisting them with applications, selecting a major, and adapting to college life.

“We have a high percentage of students at Reading High who don’t have family members who can help them with this,” explains Worrall, adding that the program has a 95-percent success rate in getting its participants admitted to a college. Some have even chosen Alvernia.

In 2013, the Holleran Center started the Bog Turtle Creek Farm on former athletic fields near Mohnton, PA. The project was inspired by a trip staff and students took to the Rodale Institute Experimental Farm, five miles east of Kutztown. Participating students not only do the farmwork, but sell produce at the downtown Reading Penn Street Market and at the Oakbrook low-income housing development. They also sell the produce on campus through CSA shares. The money goes back into the farm, and what they don’t sell goes to area food banks.

In addition, the Holleran Center has partnered with Berks Nature and the City of Reading on improvements to nearby Angelica Park. (Berks Nature is based in the recently built on-site Nature Place.) Along with some maintenance responsibilities and joint programs, Alvernia has students helping with the summer Eco-Camps.

All of these activities are tied in with students’ classroom work, giving them real-world experience in what they’re learning.

The Holleran Center also oversees the Office of Career Development and the Multicultural Initiative, which manages study-abroad programs for Alvernia students — participation in the latter has doubled each year for the past four years, to 91 this year. Programs range from full semesters to faculty-led, cultural-immersion experiences that last one week to 10 days.

As more Alvernia students are showing up in countries like Spain, Ecuador and China, graduate students from places as far-flung as Saudi Arabia, Bosnia and India are coming to Alvernia as graduate students, attracted by its innovative Ph.D. program in leadership.

Dr. Tufan Tiglioglu, associate professor of finance and international business, has been director of this program (which has graduated more than 60 people) since 2010.

Each enrollee chooses an area of concentration — community, corporate or educational leadership — but all students move through their course work and weekly meetings as a cohort. Their diversity in educational, career and cultural backgrounds allow them to learn from each other as they work toward becoming research scholars. The emphasis is on collaboration, collegiality and interdisciplinary study.

One of the current Ph.D. candidates, now working on a community-based research project for his dissertation, is Jim Elliker. He spent his career in human resources for Air Products and Chemicals Inc. and Lutron Electronics Inc. in Allentown. Now retired, he plans to apply his leadership studies to helping the local community.

“The biggest strength of the program is the interdisciplinary, cohort experience,” he says. “You develop camaraderie with these 12 people; you live through this together for three or four years until you break off for the dissertation. It becomes a lifestyle.”

Elliker said he was initially attracted to the program because he wanted to explore the concept of “servant leadership.”

“My ultimate goal is to find the essence of servant leadership,” he explains. “What is it? Can you build a servant-leadership organization for the long term?”

The PhD, which takes five to seven years to complete, is designed to work with other academic programs at Alvernia, from healthcare to the humanities. While there are some in the program who are full-time students, most have already established themselves in their professional careers and wish to advance into leadership roles.

“This program is our crown jewel,” says Tiglioglu. “We have more than 30 faculty members involved in it. All of the faculty are devoted to this program, because it’s part of our general mission.”

Julianne Wallace, Alvernia’s vice president for mission and ministry, has the job of articulating that vision to faculty, staff, students and outside partners.

Her office “helps students with exploring their spiritual life, whatever that may be,” explains Wallace. “We have a goal of helping them answer questions of theology, both Catholic and non-Catholic.”

Although Alvernia has always been a Roman Catholic institution with an emphasis on Franciscan values, only about 30 percent of its students identify as Catholic, and of those, only about 10 percent are practicing (i.e., attend Mass). The majority of Alvernia students are non-Catholic Christians, with a sprinkling of students with Jewish and other religious backgrounds.

This is a reflection of Flynn’s relentless emphasis on interfaith understanding. The Interfaith Chapel on the first floor of the Franco Library is a quiet room where anyone can come to pray or meditate. Bookshelves hold prayer rugs and compasses to find the direction of Mecca for Muslims; yarmulkes and Torahs for Jews; and rosaries and prayer books for Christians, among other symbols of faith. There are no crosses or icons on the bare walls — a deliberate signal that this is neutral ground.

Meanwhile “A Common Heart” is a collaboration Flynn formed with Elsayed Elmarzouky, president of The Islamic Center of Reading; Rabbi Brian Michelson of Wyomissing’s Reform Congregation Oheb Sholom; and Fr. Philip Rodgers of the Church of St. Benedict in Mohnton. The program sponsors interfaith activities that take Alvernia into the community, addressing topics such as women in faith, the power of prayer and suffering in faith. It also organized a pilgrimage to Israel.

Donors Michael and Susan Fromm (Michael Fromm is also chairman of Alvernia’s board of trustees) helped establish the Interfaith Chapel and also sponsor the Fromm Interfaith Scholarship each year, in which a student is selected to do a project to promote interfaith understanding.

One of these was “To Be a Refugee,” an event set up in the Quad two years ago to simulate a day in the life of a refugee. The public was invited to visit a border patrol checkpoint, then four detention-center stations — water, education, housing and healthcare — performing tasks such as carrying a big water container or eating a refugee-style meal. The emphasis was on creating compassion for people in this situation. Now it’s an annual event.

“St. Francis saw himself in God and in the poor,” says Wallace. “For our students, solidarity is the ultimate goal — realizing their common humanity with those they serve. The next step is seeing how we can learn from the people we serve.”

SUSAN L. PENA is a freelance writer living in Berks County. She writes regularly on arts and business for the Reading Eagle and has contributed to several other publications including the Eastern Pennsylvania Business Journal.

All images courtesy of Alvernia University.