For every tech entrepreneur working out of a garage and dreaming of unicorns — not the mythical creatures, but the legendary startups that ultimately hit a $1 billion market valuation – the hard truth is that the odds of survival are daunting. As Forbes reported last year, as many as 75 percent of venture-backed startups fail; the failure rate of all U.S. companies after five years is over 50 percent.

Meanwhile in Pennsylvania, a healthy cohort of growing tech startups are beating the odds. We spoke to three founders about what it takes to get solidly on the path to success.

ColdEdge Technologies graduated from Allentown’s Bridgeworks Enterprise Center in 2017 and became only the second company invited to stay on as an anchor tenant. Today, the team occupies 6,200 square feet at the incubator, making custom laboratory equipment that uses liquid nitrogen and liquid helium to cool things close to absolute zero — the coldest possible temperature in the universe — for physicists, chemists and other researchers worldwide.

Terry Rufer: ColdEdge started in 2008. It was founded by self-described “mad scientists” Ajay Khatri, Jeff Romig, Eric Lecher and me. The four [of us] had worked together in cryogenics since the 1990s, and wanted to start a company focused on meeting the needs of modern researchers. None of us had any previous entrepreneurial experience.

Every laboratory has a different setup and handles different experiments, so standard products inevitably have to be adjusted/tweaked/MacGyver’d to do what the research team wants. ColdEdge was formed with the goal of working directly with scientists to design custom systems for each unique experiment.

ColdEdge started in one of the Bridgeworks startup offices with nothing but a card table and a laptop. However, we had plenty of ideas and worked quickly to start brainstorming with potential customers. We recently unearthed some dinner napkins from our early business days, covered in scribbled diagrams of technology that would develop into reality over the next few years.

As we grew, ColdEdge moved through Bridgeworks’ entrepreneurial ladder. We expanded into a larger space in 2010, and then branched into a separate office and manufacturing shop in 2014, adding employees as company tasks became too much for the four founders to handle on our own. ColdEdge [became] a Bridgeworks anchor tenant in 2017. We now have over 6,200 square feet of office and workshop space, as well as direct access to the main shipping dock.

To what do you attribute ColdEdge’s success and growth? And what advice do you have for younger startups?

ColdEdge was able to succeed because of its diverse team. When starting a business, it’s tempting to team up with people who think just like you, but it’s far more valuable to have a range of opinions and experiences. We needed someone to think like a salesman, someone used to being hands-on, someone who could manage a storeroom, someone experienced with research and development, etc. Some of us are perfectionists, some of us are focused on efficiency, and most of us are the type to fiddle with a puzzle for days until we figure out a solution. All of these perspectives enhanced the quality of our business discussions and decisions.

[As for advice], don’t get too hung up on writing your business plan. That part is important for investors and a starting direction, yes, but it’s often better to keep yourself open — grow, expand and explore opportunities as they come up. Everyone makes a plan at first, but then the market whisks you away and you have to be ready to go with the flow. ColdEdge started off by finding customer projects that lined up with the technology we wanted to develop for the future. Those projects allowed us to keep money moving while simultaneously investing in R&D for our future. When you’re the “new guy” in an industry, your job is to find empty spaces in the market and fill that need.

AEDC was especially vital to ColdEdge’s development. The ability to upscale as we grew — along with the abundant professional resources that the Center provides — had a huge impact on our success. On a personal level, the culture is extremely rewarding. Everyone at Bridgeworks is a startup just like us, working hard and supporting each other at every opportunity. It really feels good to be surrounded by such creative, dedicated people every day.

Allentown is a surprisingly popular destination for cryogenics manufacturing. The former APD Cryogenics was based in Allentown, and one of our closest business partners, Sumitomo Cryogenics, is right around the corner on Lehigh Street. We can’t imagine ColdEdge being based anywhere else.

What are you excited about?

Moving forward, ColdEdge wants to focus on independent R&D. We plan to increase the value of our systems and introduce new tools that let scientists make the best use of their funding and time. With every new scientific breakthrough comes a hundred more questions to explore, and ColdEdge is excited to discover how our systems will be put to use next.

When Mission Critical Partners launched in 2009, its founders were as busy building the office furniture as they were building the company. Today the Centre County-based company provides advanced public-safety-system technology to governments, utilities, college campuses and others nationwide while employing 100 people.

Kevin Murray: My co-founders (Brian Bark and Len Kowalski) and I started MCP 10 years ago from makeshift offices located in our garages and basements in State College and Pittsburgh. Prior to founding the firm, we worked together at a Pennsylvania-based architecture, engineering and consulting firm, where we built a telecommunications and technology division that quickly grew to be one of the largest revenue sources for the company. However, with fast-paced growth came challenges, politics and silos. 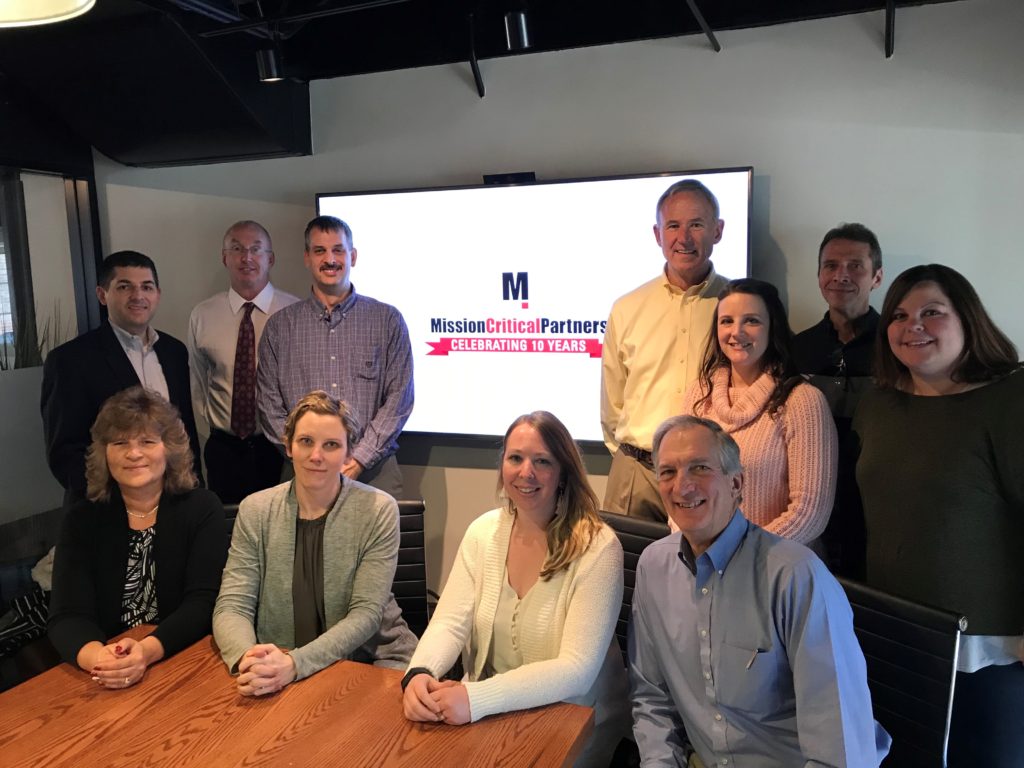 That experience inspired us to leave our secure, well-paying jobs and start MCP. Several of us are former first responders, and all three of us have dedicated the vast majority of our careers to playing a role in transforming the public safety communications industry. We share the mission of saving lives and improving emergency response outcomes.

The three of us put up everything we had in order to secure the loans we needed to start the company from scratch. We applied for a Ben Franklin Technology Partners loan that helped us hire additional resources, market, and expand our business. We paid back the loan quickly as the company grew.

It was a tremendous amount of time and work. Ten years ago, we were bringing new employees on board at a time when we weren’t getting paid ourselves. It was scary, and a lot of work.

Ten years later, to what do you attribute MCP’s success and growth? What advice do you have for younger startups?

When we started MCP, we decided to embrace the Rockefeller Habits, based on principles from the world’s great business leaders. It is so important when you’re starting and building a company to have priorities and rhythm, and to keep everybody on the same page. The Habits gave us that. It is very easy to get distracted and lose focus. The Habits helped us avoid that. There are a thousand things you could do every day. The Habits helped us prioritize the things that were going to move the business forward.

Also, we try to bring in the right people and have them work in an environment where they can thrive. But it’s more than just the right people…we set out to bring in diverse thinkers who share our vision and passion, and then create teams where the thinking is balanced.

Having a diverse group makes us look at problems differently, and that has been the key to our success.

Pennsylvania is a very smart place to start a business. It’s located within the area of the U.S. that has the largest density of people. The cost of living is affordable. There is access to some of the best universities in the world — schools like Penn State University (PSU) and Carnegie Mellon — that can be test beds for industry-changing technologies. We’ve relied a lot on PSU here in State College for some of our most innovative projects, including how to incorporate artificial intelligence and social media into the emergency response process.

What’s been the biggest surprise?

What has surprised me the most over the past ten years is how quickly time has passed. But looking back, what’s been most gratifying is watching our people grow, and seeing them learn and accomplish things that are really difficult. There is nothing better than watching our staff deliver great results to a client.

Integral Molecular develops biotherapeutics for diseases without effective cures. Since its inception, the company has brought more than $50 million in National Institutes of Health (NIH) grants and contract funding into Philadelphia, and has emerged as an industry leader and active corporate citizen.

Ben Doranz: Integral Molecular co-founders Sharon Wills, Joe Rucker and I worked together in the 1990s at the University of Pennsylvania to develop novel, virus-based technologies that could be applied in the fight against hard-to-treat diseases. In 2001, we moved to a two-person lab at the University City Science Center’s Port Business Incubator, armed with technology licensed from Penn and an award-winning Wharton School business plan. Our first National Institutes of Health (NIH) grant came in 2002. By 2003, we were profitable.

Our products and services are now sold to over 300 pharmaceutical and biotech companies. We’ve been able to grow without needing to go to outside investors, enabling us to achieve profitability early on.

But hiring the right people has always been the key: scientists who are self-motivated, passionate about making a difference, and care about the company and the other people in it. That creates successful products, satisfied customers, and an engaging company culture that has propelled us to more than 60 employees today and our newly expanded footprint at the Science Center.

We’re fully committed to the Science Center, University City, Philadelphia and Pennsylvania, all of which have contributed significantly to our success. University City has been a great place to grow, putting us within walking distance of $1 billion worth of scientific research, expertise and collaboration at the University of Pennsylvania, Drexel University, Children’s Hospital of Philadelphia, Wistar Institute and Thomas Jefferson University. More than half of our employees comes from those institutions.

We’re always thinking of new ideas, innovating and creating new technologies. You can do that in a cornfield, but it’s a lot easier if you have other companies, people, discussions, seminars, and resources around to help.

What are you excited about?

Besides our core scientific mission, we’re excited about the other types of work that we do – not just science but things around science.

Our scientists want to give back by building a mechanism for local residents and graduates to fill in-demand biotech jobs. We’re actively involved in workforce development, and educational and training initiatives ranging from middle to graduate school.

We also founded the BioArt Residency program with the Science Center in 2017. We’ve brought six artists into our labs for three months at a time to shadow our scientists and create artworks that exhibit at the Science Center’s Esther Klein Gallery and beyond. The BioArt Residency program makes us more innovative, helps educate everyone around us about biotech research, and ultimately improves public health outcomes.