Painting his way from “Brownsville to Braddock”

This story was created in partnership with the Mon River Towns Program | www.monrivertowns.com

Swiss painter Paul Klee once said: “Art does not reproduce the visible, it makes visible.”

That is what local artist Ron Donoughe is doing for the Monongahela Valley with his new book, Brownsville to Braddock: Paintings and Observations of the Monongahela River Valley. Being published in March 2021 by University of Pittsburgh Press, the collection captures the region’s history, as well as its natural and man-made beauty. With a foreword by Maxwell King, past president of the Heinz Endowments and the Pittsburgh Foundation, and an afterword by Ron Baraff, the importance of the Mon Valley to the greater Pittsburgh region is brought into focus.

Donoughe has been documenting western Pennsylvania for most of his career. Originally from Loretto, PA, in Cambria County, Donoughe has lived in Pittsburgh since 1979. An alumnus of Indiana University of Pennsylvania, where he majored in Art Education, Donoughe first followed the path of many artists: teaching, working in museums, and doing graphic design work. But he only found satisfaction when he began painting western Pennsylvania full-time. Aspiring art students who are reading this from their artist desk or workspace would find Donoughe’s works to be quite inspirational.

“I don’t look for the post card images,” says Donoughe. “I try to portray how the landscape feels. I especially like to bring under-documented areas to attention, often those that are post-industrial, or facing challenges.”

Well known for his moving impressions of Pittsburgh’s streetscapes, such as those in his collection “90 Pittsburgh Neighborhoods,” which is on permanent display at the Heinz History Center, Donoughe has been interested in painting the Mon Valley for a long time.

“I like to do long term projects, painting a region for up to a year at a time,” he explains. “I was interested in portraying the Mon Valley because it played a significant role in the industrial growth of the area – including Pittsburgh – but it has long been overlooked. People in Pittsburgh live right by the Mon Valley, but they do not venture there.”

Donoughe hopes his book can help change that.

“Artistic representation of a region can bring about interest in exploring that area,” he continues. “Industry was important and thriving here. At one time, Brownsville was a larger city than Pittsburgh. After that industrial dynamic shifted, the entire Mon Valley was overlooked. I really wanted to capture it in a comprehensive way before too much of the history was gone.”

A collaboration between Rivers of Steel Heritage Area, Touchstone Center for Crafts, where Donoughe teaches, The Mon River Town Program, and California University of Pennsylvania gave Donoughe the chance he was looking for to document this important region. Donoughe’s dream project fit with the educational mission of Cal U and its commitment to the community, as well as the goal of both Rivers of Steel and the Mon River Town Program to bring art to the Mon Valley as a stimulus for growth.

Donoughe’s paintings, including the works in his new book, are almost exclusively done in the style known as Plein Air – which means, essentially, painting in the open air, directly from nature, rather than imagination or photos.

“I am always interested in the interplay of light and shadow, and it is better to capture that in person, outside,” says Donoughe. His paintings are featured in the permanent collections of the Westmoreland Museum of American Art, and at the Heinz History Center, among other venues, and Donoughe has been the recipient of numerous awards for his work.

As he set up his outdoor easel to paint the works in Brownsville to Braddock, Donoughe was often approached by curious residents. Some of his conversations with those locals, as well as photographs of the painting’s sites, are incorporated into the book, bringing the scenes he captured alive through the words of Mon Valley citizens, as well as his own impressions of the region.

A show and reception were planned for Spring of 2020 at CalU’s library and, in early 2019, Donoughe began his work, producing approximately a painting a week for the show. He often set up his easel along the river’s edge in Brownsville, California, Charleroi, Monessen, Clairton, Duquesne, McKeesport, and Braddock. Donoughe painted in the same direction the river flows – north from Brownsville to Braddock. One could take a road trip along the river and view the sites of each of the paintings in the order they appear in the book.

Unfortunately, the show at CalU was postponed due to the pandemic. One of Donoughe’s paintings was purchased by the university for permanent display.

“I hope to see the university become a place where alumni and the community can soon come to see fine art on display that reflects the region,” says Maggie Aston, associate professor in the Department of Art and Languages. She notes that Donoughe’s work captures the traditional landscape of the area, and also documents the region’s industrial past: “Those mills and industrial relics tell a story and are beautiful in their own way.” 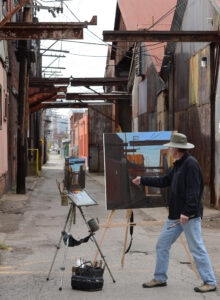 Though the CalU show was canceled, the story is still told through Donoughe’s book. Brownsville to Braddock will be available at local bookstores, and book signings are being planned at various venues, including bookstores, museums and libraries in the Pittsburgh and Mon Valley areas. Webinars are also being planned through Pitt Wire. Pre-Orders of the book can be made through the University of Pittsburgh Press’ website and Donoughe’s website.

In his journal, Eugene Delacroix, 19th Century French romantic artist, wrote that, “painting is a bridge linking the painter’s mind with that of the viewer.” That quotation is especially applicable to Donoughe’s new work, which perceives the beauty and importance of an overlooked region, and its place in our collective past, and shows it to us, the viewer. His works enable us to see a landscape we may have passed many times as if seeing it for the first time.